Since Loblaw Companies Ltd. first introduced personalized coupon offers to its shoppers via mobile app delivery, it has seen response rates to its coupons double, according to an analyst familiar with the project.

The PC Plus program was officially launched across Canada in November 2013 and included mobile apps available for iOS, Android, and BlackBerry devices. Customers using the app are rewarded for their loyalty to shopping at Loblaw’s grocery stores and Superstores, given points for spending money at those locations and earning bonuses for buying specific items. The program has been so rapidly adopted that Loblaw expects to surpass its expectations for the first year of operation and earn hundreds of millions of dollars in incremental revenue gain as a result, says Brian McDonough, a research manager for business analytics solutions at IDC Corp.

“It’s making personalized offers and it knows what similar shoppers bought that you’re not buying,” he says. “So you increase your spend, kind of broaden your basket if you will.”

Loblaw was not available for interviews on the program, but McDonough has spoken with people at the company about the program’s success. Last week Loblaw was awarded for its loyalty program by San Jose, Calif.-based FICO (previously Fair Isaac Corp.), winning its 2014 FICO Decision Management Award for Analytic Excellence.  Loblaw uses FICO’s Analytic Offer Manager to match its customers with the coupon offers they are most likely to use.

“We were in a unique position to design a next-generation loyalty program that would embrace customer analytics for one-to-one marketing,” he said. “Our analysis showed us that the best customers accounted for more than 60 percent of revenue, but market data suggested that we were only capturing about 50 percent of the grocery spend of these customers. We have a large opportunity to grow sales with our best customers.”

Loblaw also addressed its PC Plus loyalty program in its annual earnings report for 2013. Dated Dec. 31, 2013 it describes the digital loyalty program being launched at 44 stores in May 2013 and rolled out nationwide in November 2013. It’s described in the report as “the first all-digital intelligent retail loyalty program designed for delivery on a smartphone.”

Less than nine months after the mobile app launch, the PC Plus program has reached one-third of Canadian households, according to FICO. In total, the program counts about 6 million members.

https://www.youtube.com/watch?v=nAT_b1xK9SQ
Loblaw President Galen Weston is featured in this advertising spot introducing PC Plus, which takes the concept of personalized shopping to a whole new level.

Loblaw taps FICO’s software to automate what offers are delivered to its customers on a weekly basis. To do so, it sends customers’ transactional data to FICO, applies a set of business rules that apply to certain objectives, and then outputs scores for each customer matched to each product in Loblaw’s inventory.

By the numbers, FICO produced 10 billion individual scores every week that results in 35 million different product recommendations being made to customers. All that back-end number crunching is invisible to the shopper that loads their offers via smartphone, says Michael Testa, principal consultant for marketing solutions at FICO.

“If you have a particular type of mustard you like and you buy it, you’ll get an offer on that,” he says. “We’re not pushing fish on you if you don’t like fish, we’re giving offers to you that you want to buy.”

Loblaw provides the transaction data in an anonymous pool, Testa says, so grocery buying lists are associated only with a unique number, not a name and identity. 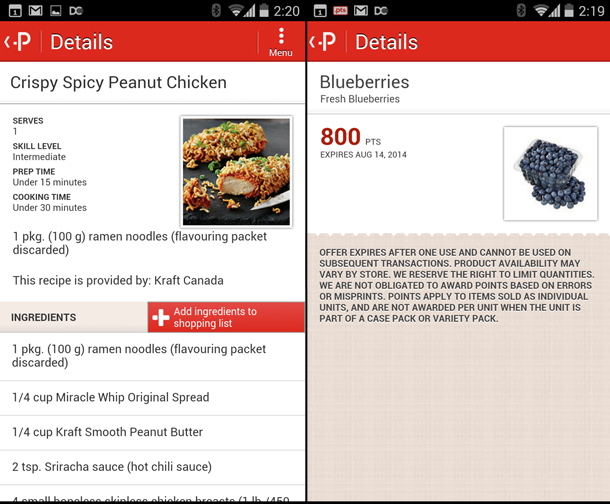 Loblaw was awarded by a group of independent judges for FICO’s awards program because of the unique nature of the program, Testa says. “There really isn’t any other retailer out there, not only in Canada, but globally, that’s doing this type of personalization on this sort of scale.”

In the heated mega-store market where grocers and retailers alike are constantly broadening the number of products they offer under one roof in an attempt to grab a bigger share of each shopper’s wallet, a personalized offers engine can be a powerful incentive for shoppers to pick up more of their consumables at a Loblaw’s location, McDonough says.

“You don’t want to be price competitive in a world where Wal-Mart is selling groceries,” he says. “It has to come through these efforts like personalized marketing campaigns.”

FICO’s decision-making automation technology has been made use of by the financial industry for fraud detection and evaluating credit risk, McDonough says. Loblaw has created a competitive advantage by tapping into as a marketing intelligence tool.

But what if another competitor caught on to the same approach?

“They’d be right back to that Cold War standoff,” he says.

How Loblaws created an in-house ecommerce startup – and won an award...

Bitcoin or bust – How Canada’s crypto-mining market booms while other blockchain...