Bell continues to receive most complaints of any carrier, is least improved 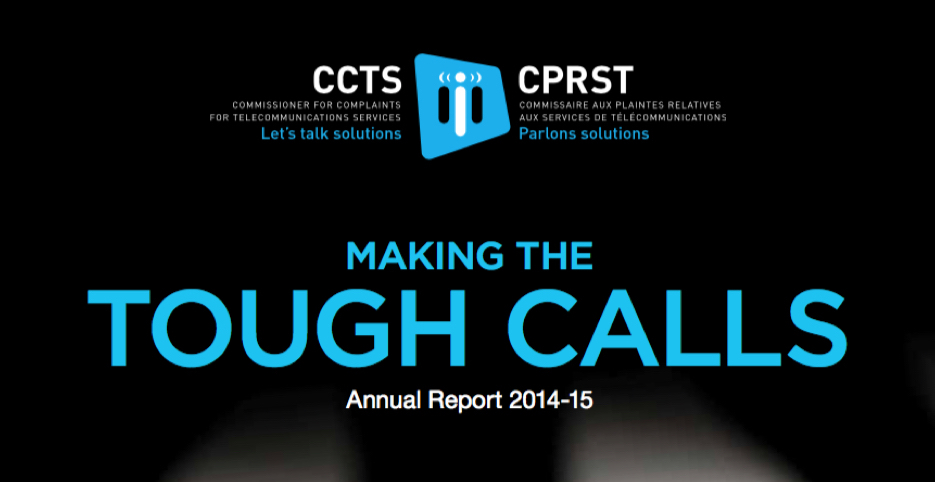 Once again, Bell Canada has made it the top of the Commissioner for Complaints for Telecommunications Services’ (CCTS) naughty list.

In its 2014-15 Report, Making the Tough Calls, the CCTS ranks Canadian carriers based on two important codes of conduct developed by the Canadian Radio-television and Telecommunications Commission (CRTC): The Wireless Code (TWC), and The Deposit and Disconnection Code (D&DC), both of which apply to domestic and small business services.

Seeing Bell at the top of its list for yet another year marks a trend that the CCTS’s Commissioner and CEO, Howard Maker, says is cause for concern.

“I don’t think they should be happy with that performance,” Maker told ITBusiness after the report’s findings were made public. “Bell is struggling with a lot of old legacy systems. You have these old systems, you’re putting more data in them, you’re adding more services, and you’re trying to put them all on one bill. That’s a recipe for problems.”

Rogers once again found itself in second place overall with 18.2 per cent of the total complaints received (half that of Bell). However, unlike Bell, Rogers fared much better in the area of TWC breaches and D&DC grievances, scoring just 1.7 per cent and 0 per cent of all complaints in these areas, respectively.

While both large carriers showed decreases in the volume of complaints received, it was Rogers who fared better: while the total received complaints about Bell dropped by just 1.4 per cent, Rogers’ complaints were down by a much more substantial 24 per cent, double the average decrease of 12 per cent.

According to Maker, that 12 per cent decrease is not only good news, it’s a clear indication that, when they put their mind to it – along with their resources – Canada’s carries can make improvements.

“What we see today working with Rogers is they put resources on it, they put focus on it, and they try to work with us,” says Maker.

As for Bell? Despite the fact the CCTS has “seen some attitudes and processes at Bell that do not lead to friendly customer service and timely outcomes,” Maker remains optimistic that the problems identified in the report can be fixed. “This can be done. We’ve seen concrete examples of it being done.”

According to the report, of the total of 761 complaints logged by small businesses, most tended to focus on contractual issues. And of these, one of the most frequent complaints revolved around the issue of auto-renewal, a process whereby a customer’s contract is automatically renewed unless the contract was specifically cancelled (nearly 44 per cent of all complaints received from small businesses related to this problem).

The following is a list of the top five complaint issues reported to the CCTS by small businesses:

For further details, and to learn more about the work of the CCTS, visit their website at www.ccts-cprst.ca.

Bryan Dearsley
Bryan Dearsley has been involved in the establishment and running of numerous magazines and e-publications. After almost a decade as Associate Editor of CARPNews FiftyPlus (now Zoomer), he turned freelance and now provides editorial services to a variety of print and online publications worldwide, including Microsoft’s ED: Education Discovered and PlanetWare.com (one of the Internet’s longest running travel guides).
Previous articleCFL hunts for a high tech game changer at SportsHack 2015
Next articleIDC predicts smartphone slump, softer ICT growth for Canada in 2016