The Nokia N97 Mini includes most of the features of the Nokia N97 in a smaller form factor.

However, according to a Nokia Canada exec, the Mini shouldn’t be just viewed as a pared-down version of its elder sibling launched last December on the Bell Mobility network.

“I think it’s a great complement to the N97. [The Mini] really addresses what customers are looking for on many fronts,” Chad Saliba, solutions sales manager at Nokia Canada told ITBusiness.ca.

The N97 Mini — unveiled in Canada in June — is being offered exclusively by Rogers Communications Inc.  for $49.99 with a three-year contract, or for $499.99, without a contract.

Users can access the Internet via Rogers’ 3.5G network, and the device also supports WiFi.

I tested the device over several days, and was struck by is very extensive range of features.

It weighs 138 grams, which makes it bulkier than slicker-looking touchscreen phones (such as the iPhone or BlackBerry Storm). But the Mini includes some metal in its casing and sports a slide-out QWERTY keyboard, so the extra heft is a worthwhile trade-off.

These are the mobile Internet devices of the future

The device offers access to a broad spectrum of out-of-the-box apps and services, including:

Apart from pre-loaded apps, you can download others from the Nokia Ovi Store.

Looks-wise the N97 Mini is nothing to write home about.

The minimalist design may make the device easier to use, but does little to heighten its visual appeal. The actual display is 3.2 inches, and on-screen content can be viewed in portrait or landscape mode by rotating the device. Below the display are the Menu, Call and End Call buttons. 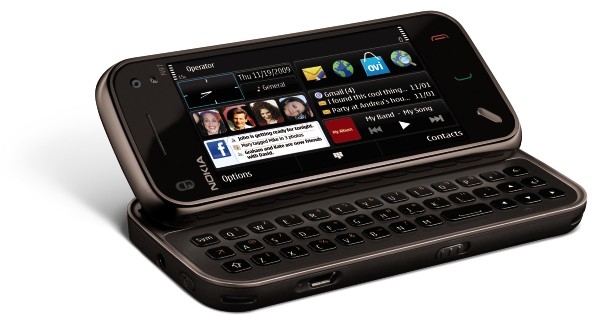 The raised and angled Menu button looks a bit incongruous. The camera lens and LED flash unit at the back of the phone is slightly raised, and this also detracts from the phone’s visual appeal.

However, the Spartan look doesn’t in any way inhibit your ability to enjoy the phone’s impressive and extensive array of multimedia features.

The touchscreen on the N97 Mini is “resistive” and, in theory, not as smooth as the capacitive touchscreen sported by the iPhone or the BlackBerry Storm. However, having tested out all three devices, I can say this difference in touchscreen technology doesn’t make a huge difference to the user experience.

A neat feature of the N97 Mini’s design is the way the screen slides out and locks in place at an approximately 135-degree angle when the QWERTY keyboard is pushed out. This clever piece of engineering allows you to rest the phone on a surface, while using fingers on both hands to type.

Call quality on the N97 Mini is good, with no background sounds or interference.

The Contacts feature too has a lot going for it. Entering the name of the new Contact with the onscreen keyboard, though, was a challenge. You have three or four alphabets and a number to every key and trying to get to the alphabet you want can be a frustrating experience. It’s best to use the slide-out QWERTY keyboard to enter Contact details.

Directly from the Contacts list you can call or text-message by single-pushing the contact’s name, and then pressing the appropriate thumbnail to the right of the list. Pressing twice on a Contact’s name will take you to another screen where – in addition to calling and texting – you can make a video call to the person (if their smartphone also supports this capability).

Setting up Mail for Exchange was also a piece of cake. You can configure it for automatic or manual synchronization with your office e-mail server.

To access your personal email accounts you have the option of adding those to a Nokia Messaging account, which you first need to set up.

Purchase of the N97 Mini includes a subscription to Nokia Messaging. 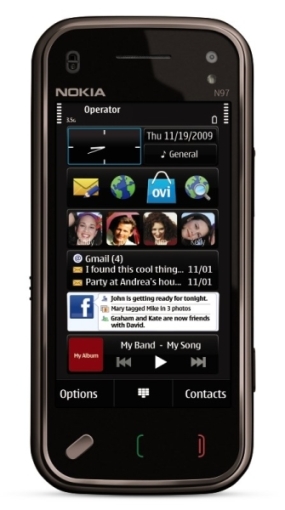 There’s a caveat, however. When you start using the service, you’re told that the cost for data traffic accessed through Nokia Messaging may not be included in the “flat rate” data plan offered by your service provider. So it may be advisable to check with your provider how much extra you would have to pay before using this service.

Nokia Canada’s Saliba, however, noted that in his experience data from the Messaging Service is treated like any other data and would be included in the user’s data plan. “In any case, we optimize services, so as little data as possible is used when accessing Messaging or any of our Ovi services.”

The N97 Mini is loaded with apps and widgets offering you an impressive breadth of functionality. Some are free. With others, like Adobe Acrobat Reader, you get a limited free trial. And yet others, such as QuickOffice Premier, have to be purchased right away.

From the Applications screen you can access mobile versions of Amazon.com, as well as of YouTube, Facebook, MySpace and other social networking sites. You can also search for and download podcasts. When downloading podcasts, or other multimedia material, whenever possible connect to WiFi rather than the Rogers 3.5G mobile network. You’ll save loads of time.

Nokia has used the podcasts widget as a marketing channel. Featured podcasts on the N97 Mini include The Way We Live Next – a Nokia podcast series replete with information about the firm’s newest offerings, technologies, the focus of its recent research et al.

Like the iPhone, the N97 Mini also has a powerful GPS application.

When you open the app, selecting “My position” takes you to a map with your current location marked with a red dot. If you need turn-by-turn directions to your destination select Drive –> Set destination. Then you either do a search for your destination or choose one from History (previous destinations you’ve already mapped out). Your navigation will then begin.

Ovi Maps also provides other useful information — about landmarks, places of interest, restaurants in the vicinity, and much more. The app also offers you traffic data, which is updated online in real time. So when driving to a destination you can check for any road closures and select a different route, if necessary.

Ovi Maps, according to Saliba, is one of the most popular apps on the device.

He said the ability to pre-load and store maps on the device is one of its most attractive features, and distinguishes Ovi Maps from competitors’ products. “With the N97 Mini, I have the maps on the device, use no data and incur no data charges. With competitors’ products you use a good chunk of data each month just to constantly load the same maps.” 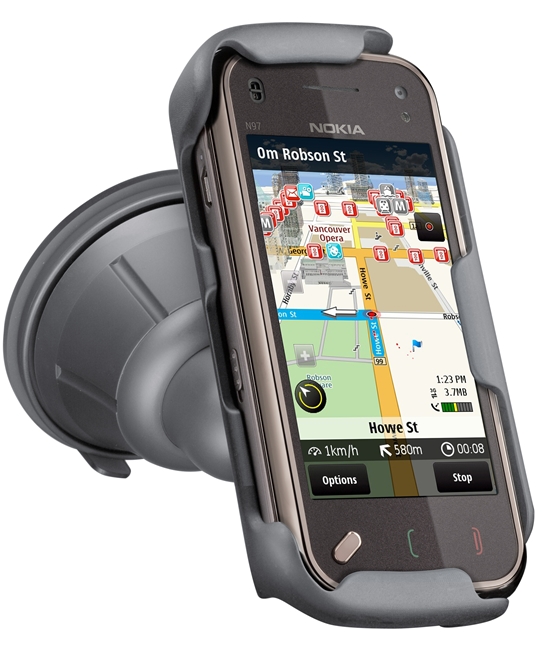 Other cool free apps available on the N97 Mini include:

Vlingo – this service allows you to control the phone with your voice. You speak to your phone to send a text or e-mail message, call someone, search the Web, update your Facebook status, create a note to yourself and more. Here again, there is a caveat. Vlingo uses your data network for speech recognition. While the amount of data used is small (about 1 MB for every time you speak to Vlingo) it all adds up. Besides, in my tests, quite often the words were not understood and the wrong services or apps were opened up from what I required.

Qik – a mobile live streaming Web application that allows you to stream live video from your smart phone – in this case the N97 Mini — to the Internet.  You can share you Qik videos on Facebook, Twitter, Youtube, and many other social networking sites.

JoikuSpot Premium – available as a free 10-day trial on the N97 Mini lets you use your phone as a wireless modem and connect other devices — such as your laptop – to the Internet using WiFi.

To promote the N97 Mini, Nokia Canada recently did separate bus tours of Eastern and Western Canada throughout the month of July. “We took influential bloggers and writers out on these tours,” Saliba told ITBusiness.ca. “Every day of the tour, they used the N97 Mini in challenges we assigned.”

These tasks, he said, highlighted some key features of the device.

“For instance, one of the bloggers on the tour was able to record a review of the device using the 5 megapixel camera right on a roller coaster at La Ronde (a theme park in Montreal).”