While there’s no dearth of mainstream HD consumer camcorders on the market today, Samsung with its S-series models has sought to raise the bar in terms of quality and breadth of features.

Since they were unveiled earlier this year, the firm’s three S-Series HD camcorders –- the HMX-S10, S15 and S16 — have generated a lot of buzz.

Most of it has focused on the WiFi/DLNA capabilities of two of the three models (the S15 and S16) in the series. They enable you to wirelessly upload video and stream footage directly to your TV or a DLNA-enabled PC (the lowest-end HMX-S10 lacks this feature).

While wireless upload is a nice-to-have capability, most videographers – enthusiasts and professionals alike – would be better off uploading footage via the USB 2.0 port — the camcorder doesn’t include a FireWire port.

Actually, the three models could be properly classified as “prosumer” devices. While mainly targeting consumers, they are also suitable for commercial videography projects.

Samsung shipped the HMX-S15 to me for testing.

The price of this mid-range camcorder at Canadian stores ranges from around $999 at Memory Express Computer Products Inc. to around $1,199 – the price quoted to me by a salesperson at the Henry’s store in Mississauga, Ont.

The S15 weighs 0.9 lb and is equipped with 32 GB of internal memory – which translates into nearly four hours of shooting time at a resolution of 1080/60i in SuperFine (SF) mode. 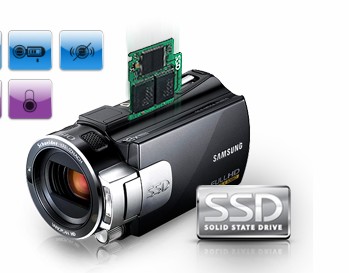 The camcorder sports a 3.5-inch touch-screen LCD.  As there’s no viewfinder, you need to use the LCD at all times when framing your subject or recording – so conserving battery life is crucial.

The S15 offers around two hours of battery juice before it needs to be recharged again, which can be a challenge, especially if you’re outdoors all day without access to a power outlet.

The camcorder’s power cord is just around 54-inches long, so if you plan on plugging it into an outlet for an indoor shoot make sure you have a lengthy extension cable.

The HMX-S15 offers a wide range of resolution choices.

Best results are obtained by using either the XF (extra fine) or SF (superfine) modes.

SF gives you nearly four hours or recording time at 1080/60i resolution using the internal memory alone, more than adequate for most projects. Going a notch lower to F (fine) mode provides around six hours (364 minutes) recording time and the resolution is still pretty good.

In my tests I mainly used SF option, with pleasing results.

Colours were vivid and images crisp, whether it was outdoor footage I recorded (streets, a park, close-ups of people, animals, birds and flowers)  or video captured indoors – within a mall, for instance.

The impressive video has much to do with the camcorder’s high-performance Scheinder Kreuznach HD lenses and its 1/2.33″ 10M Pixel BSI (Back Side Illuminated) CMOS sensor.

According to Samsung, the sensor has twice the sensitivity of conventional CMOS Sensors, reduces image noise and distortion, and enhances recording quality especially in low light conditions.

Ease of use is clearly a priority in this device’s design.  Users who can’t be bothered messing around with a range of discrete settings (for focus, aperture, shutter speed, white balance et al) can let the camcorder handle all of that for them.

The quality of video recorded during the day (in sunny conditions) was compelling.

However, in the case of footage recorded at night my experience was far less satisfying.

Night recordings of streetlight-illumined roads in my neighborhood were grainy, whether I used the “Night” or the “Auto” setting.

Apart from Smart Auto, other user-friendly features on the HMX-S15 include a touch panel that enables playback and recording with a single touch, and an onscreen menu to drill down into more granular settings.

Those who invest the time and trouble (and believe me it does take a lot of both) to familiarize themselves with the myriad capabilities of this device will find it a rewarding experience.

While a host of features are packed into the compact unit, quality and performance of these of vary widely.

Performance-wise, I’d place the S15’s “zoom” function way up on the totem pole. The 15x optical zoom allowed me a lot of leeway, delivering good video, both with wide angle shots and close-ups.

(Greater optical zoom range is among the most sought after features in HD camcorders today. Samsung and other major manufacturers are striving to respond to this market need. For instance, Samsung’s latest H203 camcorder offers 20x optical zoom, and is also equipped with Scheinder Kreuznach HD lenses).

What pleasantly surprised me when testing the S15, though, was the digital zoom quality.

While most HD camcorders include a digital zoom feature, advanced users tend not to use it much, as it usually degrades video quality, often to the point of producing unusable footage.

This is emphatically not the case with the HMX-S15.

In my tests, the digital zoom function (or intelli-zoom, to use Samsung jargon for the feature) didn’t notably reduce video resolution and clarity.  Colours were only slightly less vivid when I activated the feature but the trade-off was worthwhile, considering the extra magnification provided.

Not all S15 features fared as well, though.

For instance, the Tele Macro and Smart OIS (optical image stabilizer) functions didn’t seem to make a significant difference to the final output.

The camcorder manual recommends use of a tripod when recording in this mode, as the shutter speed may be slower. In my tests, activating this feature didn’t perceptibly improve picture quality of close-ups.

The same goes for the Smart OIS feature. When turned on, we are told, “minute lens shifts compensate for shaky hands and body movement”, the end result being a more stable picture.This wasn’t my experience, however. For instance, my hand shook a bit when recording video of roses in our front yard (yes, they’re still in bloom). In the footage the shakiness is noticeable — OIS didn’t do much to minimize the impact.

A feature that did work very well was backlight compensation.

All in all, despite a few glitches, I’d rate the HMX-S15 a good buy, not so much because of its much-publicized WiFi/DLNA capabilities, but for other features a videographer – whether enthusiast or professional – would find more useful.

Nobody talks about WiFi 6, but they should, says Martello CEO