Adobe Reader X – the latest version of this freeware offering — will be downloadable from Adobe’s Web site next month.

Acrobat X will be available in Canadian stores at the end of November 2010. Prospective customers are being offered the option of pre-ordering online at the following prices:

Security in a sandbox

“Running an application in a sandbox is like having it operate within a walled garden,” Rick Brown, Adobe senior product director for Acrobat told ITBusiness.ca. “Hackers may execute malicious code, but not being able to exit the sandbox, they can’t accomplish anything really harmful.”

For this reason, he said, a sandboxed application is a lot less interesting as an attack target.

“As far as I’m aware – besides Adobe Reader X – only two other client apps are sandboxed, Google Chrome and Microsoft Office 2010.” 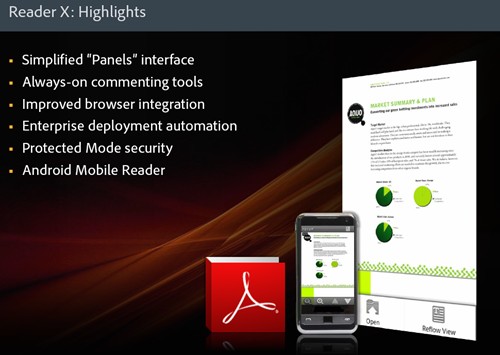 Adobe’s Acrobat.com beta a bonanza for businesses — and it’s free

Conventional approaches to security focus on code hardening through ethical hacking, he noted. “We have people in Adobe who do this. They spend all day trying to hack our own software — looking for code vulnerabilities and eliminating them.”

He said sandboxing provides that additional layer of security. “Essentially we’re trying to run harder and faster than the bad guys.”

Actions are custom sequences in Acrobat X that companies can create and distribute to end users for tasks the latter perform on a regular basis.

Some Action sequences ship right out of the box, such as Publish Sensitive Documents.

It enables users to redact sensitive information in a PDF document by taking them through a series of steps – such as Mark for Redaction, Apply Redaction, Remove Hidden Information, Reduce File Size, and so on.

“This Action sequence helps knowledge workers, who may not be technology savvy, take a task like redaction – that’s complex and prone to error – and perform it quickly, easily and accurately,” Brown said. 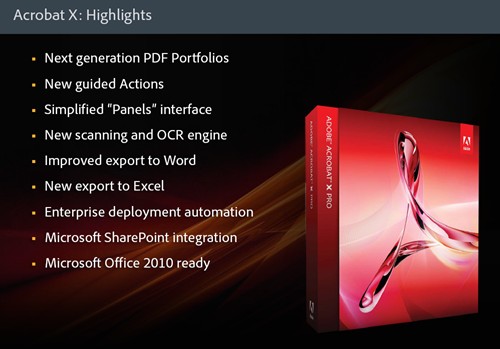 And the payoff is huge, he said. “About twice a year someone in government distributes a document publicly, not realizing there was sensitive information in it or because they didn’t know how to redact or remove that information.”

He said the Actions tool can help them locate and remove such data.

Brown clarified that even with the tool, some intervention would be required on the part of the employee to identify the information that needs to be obfuscated or redacted.

“It’s not that people wouldn’t know a piece of information is sensitive and needs to be redacted. It’s more likely they don’t know how to do it properly, and here’s where guided Actions would help them.”

And these Actions aren’t limited to the realm of security, the Adobe executive noted. “They extend to other areas, such as compliance. For instance, U.S. courts require that electronic documents be sent in PDF/A format. A legal firm could set a guided Action to ensure compliance with this requirement.”

At least one Canadian Acrobat customer is enthusiastic about the guided Actions feature in Acrobat X.

“In our firm, we execute routine business tasks in a number of areas on a regular basis,” said Ron Usher senior counsel at Bell Alliance, a Vancouver-based law firm focusing on real estate and estate planning. “The ability to accomplish those tasks with a few clicks would save us a lot of time and labour.”

“As a law firm we have an obligation to protect confidential client information, which is why we would never send out a Word document, for example.”

He said since his firm was launched five years ago, it has been an Adobe Acrobat user and he would look seriously at any Acrobat enhancement that tightens security even further. “The redaction feature in Acrobat X appears to do just that.”

Meanwhile, Adobe’s Brown also demoed how a scanned document, as well as native electronic PDFs, could be converted into other formats, such as editable Microsoft Word or Excel documents.

“Thousands of PDF files on the Web are chalk-full of data and tables business workers may want to reuse in projects they are working on,” Brown noted. They can convert those PDFs into an editable Word file, or a table can be exported as an editable Excel spreadsheet.”

Adobe has also beefed up the capabilities of Acrobat.com, its suite of hosted applications that allows users to create, collaborate on, and share documents over the Web.

One new Acrobat.com service is SendNow that enables the transfer of large files electronically over the Web. 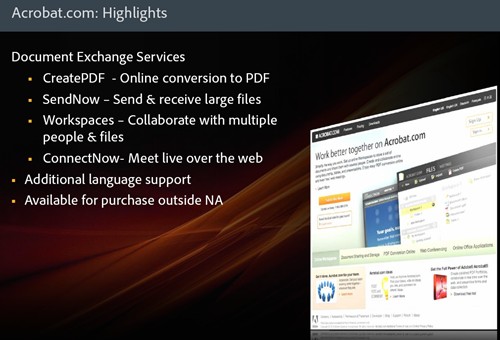 Adobe’s Brown demoed how — when transmitting a file via SendNow — the user can set certain variables such as:

“Companies often impose limitations on the size of e-mail attachments.  If a file exceeds that size, it may get blocked in the firm’s gateway and never reach the intended recipient’s Inbox. With SendNow that barrier is surmounted.”

He said the SendNow service is integrated with Adobe Reader, so files can be sent from within Reader as well as from the browser.

It also helps you system manage a document, Brown said. “For instance, in my e-mail program, SendNow will notify me that my file was successfully sent, and when someone downloads it I get an e-mail notification about that as well.”

The integration between Acrobat.com and Adobe Reader X extends to other services as well. “We’ve had a hosted service called Create PDF on Acrobat.com for a while,” Brown noted. “Now this service is can be accessed within Reader.”

Vidyard releases free video-making browser extension anyone can use

Microsoft will offer Windows 10 as free upgrade for first year