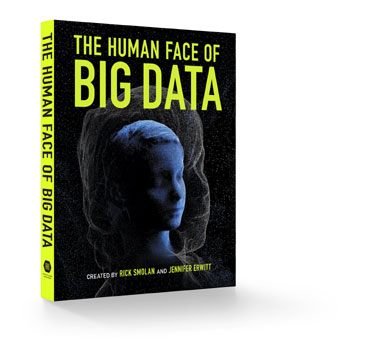 For almost two decades, Rick Smolan and Jennifer Erwitt, cofounders of Against All Odds Productions, have produced a series of ambitious global projects in collaboration with hundreds of the world’s leading photographers, writers, and graphic designers, including the acclaimed Day in the Life series, 24 Hours in Cyberspace and The Power to Heal. Now, Smolan and Erwitt have teamed up with internationally recognized digital designer and photographer Dan Marcolina, to produce the groundbreaking book and interactive iPad app, The Human Face of Big Data; sponsored by EMC, Cicso, FedEX, SAP, VMWare, Orginate, and Tableau.

Big Data is already enabling us to provide a healthier life for our children. To provide our seniors with independence while keeping them safe. To help us conserve precious resources like water and energy. To alert us to tiny changes in our health, weeks or years before we develop a life-threatening illness. To peer into our own individual genetic makeup. To create new forms of life. And soon, as many predict, to reengineer our own species. And we’ve barely scratched the surface… 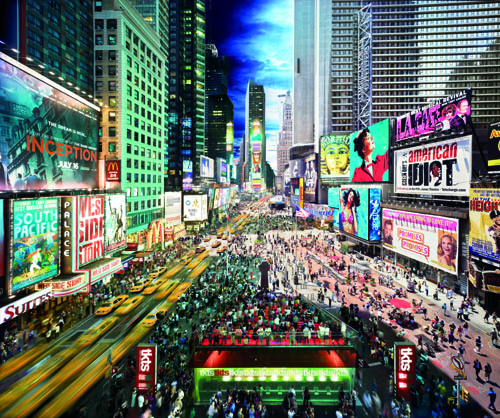 ©Stephen Wilkes 2012 / from The Human Face of Big Data

The average person today processes more data in a single day than a person in the 1500s did in an entire lifetime.

Look to the left, and you see Times Square at dusk. Look to the right, and you see the same location at midmorning. Internationally acclaimed photographer Stephen Wilkes’s time-altering image of New York’s Times Square is part of his body of work titled Day to Night. The image was created by blending more than 1,400 separate photos taken over the course of 15 hours—a meticulous process that took him nearly three months. 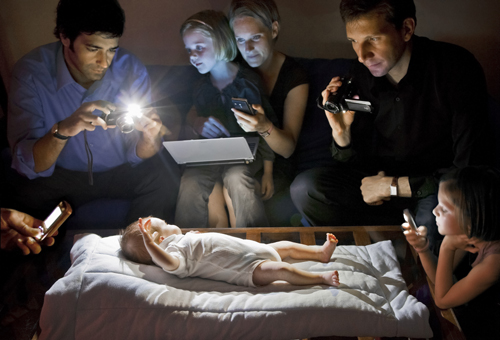 During the first day of a baby’s life, the amount of data generated by humanity is equivalent to 70 times the information contained in the Library of Congress.

According to BabyCenter.com, today one in three children born in the United States already have an online presence (usually in the form of a sonogram) before they are born. That number grows to 92 percent by the time they are two. In 2012 the average digital birth of children occurs at approximately six months, with a third of all children’s photos and information posted online within weeks of their birth. What will it mean to live in a world where our every moment, from birth to death, is digitally chronicled and preserved in vast cloud based databases, forever? 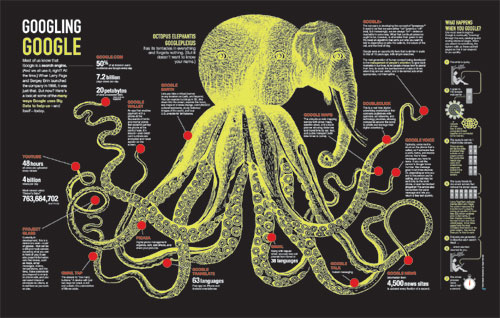 ©Nigel Holmes 2012 / from The Human Face of Big Data – Click for larger infographic.

Octopus Elephantis Googleplexus has its tentacles in everything and forgets nothing. (But it doesn’t want to know your name.) Most of us know that Google is a search engine. (And we all use it, right? All the time.) When Larry Page and Sergey Brin launched the company in 1998, it was just that. But now? Here’s a look at some of the many ways Google uses Big Data to help us – and itself – today. 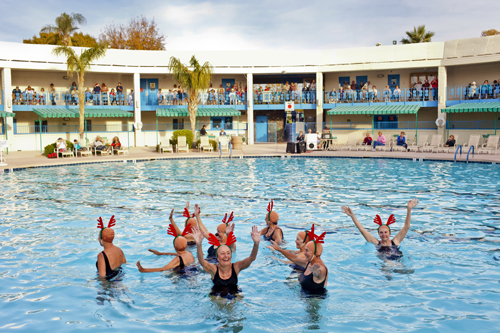 Above, energetic members of the Aqua Suns synchronized swim team of Sun City, Arizona, celebrate their retirement community’s 50th anniversary. These women epitomize the emerging concept of “active aging,” which means continuing participation in social, economic, cultural, spiritual, and civic affairs, not just maintaining the ability to be physically active.

Experts predict that in the not-too-distant future, inexpensive devices will be widely used to measure glucose levels, blood pressure, and other vital signs, serving as an early warning system that alerts their wearers to any troublesome change in their baseline. Such tools may play an important role in helping reduce the rising cost of health care around the globe. 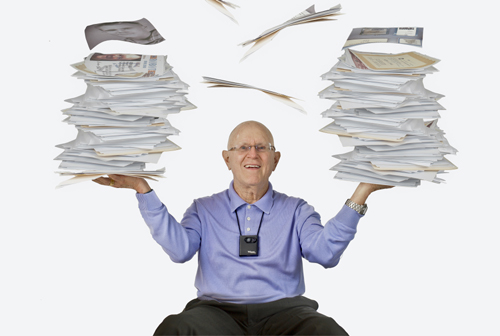 Gordon Bell’s entire life has been dedicated to engineering and computers; he was the architect of Digital Equipment Corporation’s VAX, one of the most popular computers ever, and he played a key role in the development of the Internet. Today, Bell, 78, is using those tools to chronicle every moment of his life—in the service of helping the rest of us to live ours more effectively.

A dozen years ago, as a fellow at Microsoft, Bell decided to try an experiment. He wanted to go paperless so he could work virtually—a novel idea at the time. First, he set out to digitize his books and papers. That gave way to digital documentation of all his personal photographs and memorabilia, a vast autobiography he calls MyLifeBits. Today, it involves, well, everything else: conversations, keystrokes, his geographic location, what he watches on TV—even real-time records of his heartbeat and cholesterol. A SenseCam that Bell wears around his neck snaps photos every few minutes. To date, Bell has logged 200 gigabytes of data—one gigabyte a month—including about 100,000 photos and a quarter-million emails. 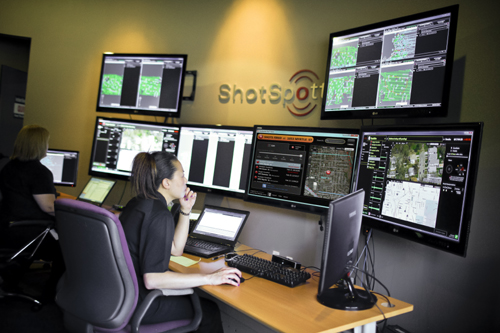 Today, more than 70 cities around the United States use ShotSpotter to accurately pinpoint the locations of shootings within their jurisdictions. The technology has become one of the most powerful tools available to crime fighters and is a classic example of the power of Big Data.

Using sophisticated acoustic sensors, high-speed telecommunications, and powerful computers, staff at ShotSpotter’s offices in Mountain View, California (top photo), can pick up, with nearly 100 percent accuracy, the sound of gunfire across the country—as this Wilmington, North Carolina, officer demonstrates (middle photo)—and pinpoint that shot not just to a spot on a street map, but to the precise outside location, all in just seconds. And instead of police arriving on the scene a half-hour later, they can be there in under two or three minutes. 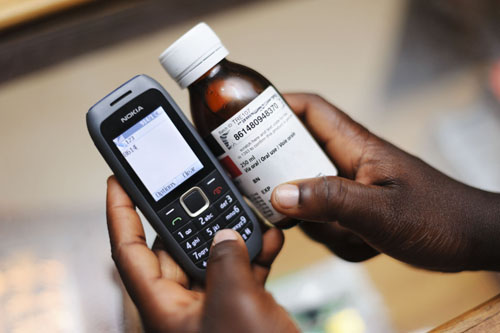 In Ghana, as in much of the developing world, neither the patient nor the pharmacist can be sure the pills are real. The World Health Organization estimates that more than half of the drugs on shelves in many parts of Africa are counterfeit. The pills are sold in shrink-wrapped, sealed bottles that appear to be from reputable pharmaceutical companies, but they contain only sugar at best. At worst, they contain substances that can do harm: an estimated 700,000 lives are claimed globally by counterfeit drugs.

That’s why Bright Simons founded mPedigree, a nonprofit that aims to make drug counterfeiting tougher by making it easy for patients to find out instantly if the medicine they are about to purchase is real or fake. mPedigree teamed up with Hewlett-Packard to create a cloud-computing drug verification system that maintains the integrity of drugs from manufacture to the moment they go home with the patient. At the pharmaceutical plant, each bottle is sealed and labeled with a scratch-off code bearing a unique verification number. At the pharmacy, patients, such as the one in the photo at left, can type the label’s 12-digit code into a text message that is sent to HP’s database. A message appears instantly on her phone telling her if the drugs are real or counterfeit. 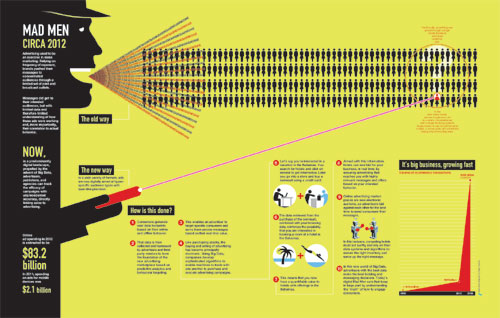 ©Nigel Holmes 2012 / from The Human Face of Big Data – Click for larger inforgraphic.

Advertising used to be an exercise in mass marketing. Relying on frequency of exposure, brands pushed their messages to concentrated audiences through a  limited set of print and broadcast outlets. Messages did get to their intended audiences, but with limited data and therefore limited understanding of how these ads were working and, more importantly, their correlation to actual behaviour.

Now, in a predominantly digital landscape, propelled by the advent of Big Data, advertisers, publishers, and agencies can track the efficacy of campaigns with unprecedented accuracy, directly linking sales to advertising. 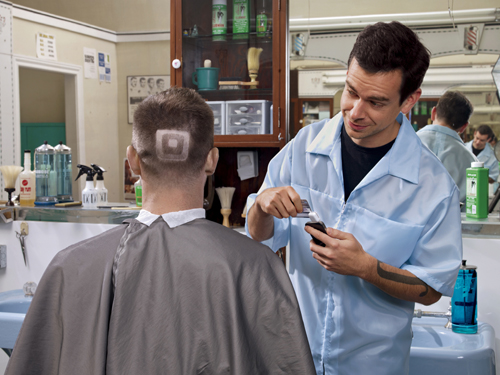 The announcement, in early August 2012, that Starbucks not only would soon begin accepting Square smartphone payments from customers at its stores, but also would invest $25 million in the young company (bringing its market value to $3.25 billion), cemented Square’s reputation as one of the fastest-growing tech start-ups in history.

No one was surprised—not with Jack Dorsey (as barber, above) at Square’s helm. Dorsey, already a tech superstar as a founder of Twitter, is rapidly becoming an industry legend. More than one million small businesses and individuals—from florists to T-shirt sellers, Girl Scouts to politicians—are using Square to accept credit card payments, something most of them have never been able to do before. Now they merely have to download Square software and attach a tiny (square-shaped, of course) magnetic strip reader to their iPad or smartphone, and it becomes a virtual cash register. The flat 2.75 per cent per swipe processing fee also helps simplify the process. 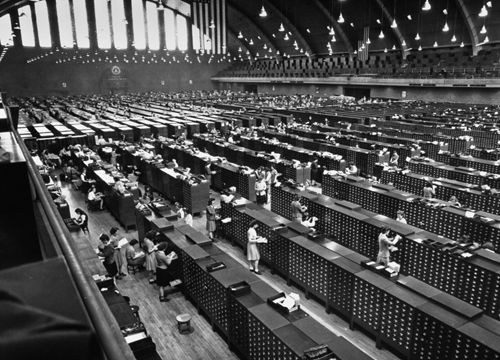 The image above is the cutting edge of Big Data, circa 1943. This is the records department of the Federal Bureau of Investigation in Washington, D.C. Here, as Time magazine explained in its 1949 cover story on FBI director J. Edgar Hoover, millions of confidential files—including 112,500,000 fingerprint files, a legal library containing 85,000 volumes of law documents, and, in Time’s words, “elaborate crime-busting files”—were stored in these massive file cabinets and tended by scores of research secretaries.

We now know that these huge files were used not only by the FBI for its crime-busting activities, but also by Hoover to gather secrets about—and power over—U.S. presidents and other public figures. Thus, whatever their official image, these file cabinets gave Hoover the greatest private cache of personal information about other individuals of any human who ever lived. 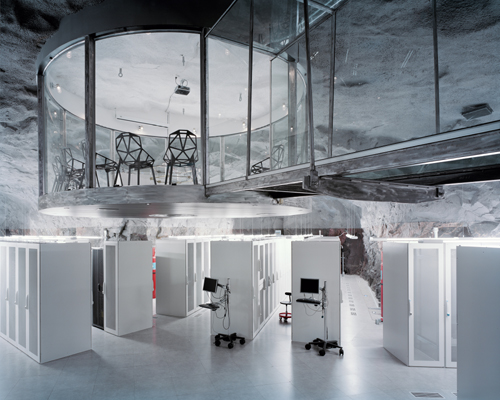 ©Christoph Morlinghaus/CASEY 2012 / from The Human Face of Big Data

The image above was taken recently at the WikiLeaks data facility. Despite its surface similarity, this data center—tucked into a Cold War–era nuclear bunker 100 feet underground near Stockholm, Sweden, with a design consciously inspired by early James Bond movies—might be seen as the exact opposite of the old FBI records department. Indeed, it is dedicated to the controversial goal of making sure that there are no government secrets ever again. Such has been the success of WikiLeaks at dumping heretofore secret government records and documents into the great public square of the Internet that its founder, Julian Assange has been castigated as an international outlaw and is pursued by governments wherever he goes.

Check out these renderings of Google’s proposed new campus

Secrets of Salesforce, FreshBooks, and other tech stars on the 2018 list...