On Aug. 19, Steve Ballmer stepped down from Microsoft’s board in an open letter to CEO Satya Nadella. Ballmer cited his new ownership of the NBA team LA Clippers, civic obligations, and teaching as filling up his schedule and not leaving the time he’d need to contribute as a board member. Ballmer is still the company’s number one individual shareholder and writes in his letter than he plans to continue to benefit from that position. He wishes Nadella all the best as well: “There are challenges ahead but the opportunities are even larger. No company in the world has the mix of software skills, cloud skills, and hardware skills we have assembled. We draw talent as well as any company in the world. We have the profitability to invest in long-term opportunities and still deliver superior shorter term performance. You’re off to a bold and exciting start.”

Steve Ballmer wrote an e-mail Aug. 23, 2013 to Microsoft Corp. employees about his plans to retire within 12 months’ time, after a new CEO was selected. After 13 years at the company’s helm, Ballmer wrote that it was the right time to leave because Microsoft was taking a new direction as a devices and services company. “We have grown from $7.5 million to nearly $78 billion since I joined Microsoft, and we have grown from employing just over 30 people to almost 100,000. I feel good about playing a role in that success and having committed 100 per cent emotionally all the way,” Ballmer wrote. Nadella (at left in the image above) was selected as Microsoft’s new CEO Feb. 4, 2014.

Steve Ballmer announced alongside Nokia CEO Stephen Elop that the Finnish smartphone maker would focus all of its efforts solely on the Windows Phone platform on Feb. 13, 2011. The deal was seen as a huge win for Microsoft at a time when Windows Phone 7 had been floundering in market share a few months after its launch, facing tough competition from Google’s Android and Apple’s iOS. Of course, the partnership would evolve and turn into a full-out acquisition of Nokia by Microsoft that was announced in 2013 and closed April 25, 2014. The two CEOs appeared on stage together at Mobile World Congress in February 2011 to talk about the partnership. “Nokia’s involvement with Windows Phone will drive volume, will create new innovations and new products, and will accelerate the adoption of the Windows Phone platform,” Ballmer said.

In the ongoing battle between Apple Inc. and Microsoft, Ballmer’s reign saw the debate move beyond the Mac vs. PC and into a range of other devices, namely smartphones. While he wasn’t afraid to throw down against Apple products, some of his barbs would later come back to bite him. Take for example an interview with Business Insider just before the release of the first iPhone in June 2007. “There’s no chance that the iPhone is going to get any significant market share. No chance. It’s a $500 subsidized item.” Just after stepping down as Microsoft’s CEO, Ballmer reflected that Microsoft missed the mobile market and he’d do it differently if given the chance to go back in time 10 years. He also said Microsoft’s acquisition of Nokia was an important move.

Perhaps one of the most important relationships between executives in the technology world has been the one between Steve Ballmer and Bill Gates. When asked about their relationship in 2007 during an interview with the Daily Telegraph, Ballmer described their connection as a “husband-wife-brother thing” and then said that “we participated together in giving birth to this amazing thing called Microsoft … We happen to have two children that are a little older, and they are great kids, they are still developing. They are in high school, they are wonderful, they have their whole future in front of them. That is our desktop – Windows and Office – and our server business. Then we have got these two young kids. They are four or five, they are really at a formative stage, and they are building their muscles. That is where we are in online and devices.”

On Nov. 15, 2001, Microsoft Corp. released its first entry to the video game console market with the first Xbox. The console sold more than 24 million units in its time on the market and has since seen two even more successful consoles released. The Xbox 360 was released in 2005 and has sold more than 77.2 million copies, and the newest Xbox One console was released Nov. 22, 2013. The Xbox entertainment and services division is one of six new businesses that Ballmer is credited with forging for Microsoft, and resulted in billions of dollars of profit for the company while fending off competitors such as Sony in the video games market. But it took time to reach profit with Xbox, and Ballmer joked about the risk he was taking at Comdex in 2001 just as the console was poised to hit store shelves: “We’re pretty enthused. This is the craziest darn thing we’ve ever done, you know, spend hundreds of millions of dollars to build a product that you lose money on every unit you sell, and I don’t know, you make it up in volume or something.”

In January 2000, Steve Ballmer started the new millennium in the number one spot at Microsoft as CEO. The first person to take control of the company from its founder, Bill Gates, Ballmer still worked within Gates’ shadow as he remained the chairman of the board and held the title of chief software architect. Ballmer’s style of management was to control the number of new products that would be developed, requiring a stringent business case be made for each one developed. He later created new metrics and score cards to measure customer satisfaction and Microsoft’s sales success. In one of his first public speeches as CEO, Ballmer attempted to distance Microsoft from its most famous product in Windows and its reputation as being a PC company. “We’re people who love software and see software as the key to transforming things in the so-called digital economy.The second thing I would say we are is a company who has lived and will continue to live by creating opportunities for others, for partners.”

Steve Ballmer was always noted for his bombastic presentation style and was sometimes said to have a heated temper. Stories have appeared in media documenting interesting incidents, such as Ballmer snatching an iPhone out of an employee’s hands on his way to deliver a speech on stage and then pretending to stomp on it. Another media report quoted an employee that was departing Microsoft for Google, saying Ballmer threw a chair across the room and vowed revenge against Google for the incident. Perhaps that most viral of his energetic displays was captured in this video from a Microsoft developer conference held early in his reign as CEO and has been inscribed in legend as the “monkey dance.” 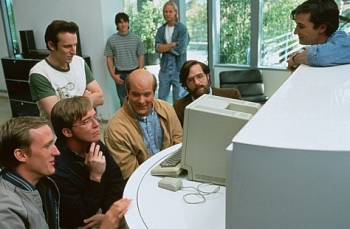 Steve Ballmer was depicted by actor John DiMaggio in the 1999 docudrama Pirates of Silicon Valley, which aired on TNT and was available as a video rental. The movie explores the journey of main characters Bill Gates and Steve Jobs as they clamour to claim the leadership of the personal PC revolution. Since Ballmer was one of the first 30 employees at Microsoft and played a key role in its early days, he appears in a large portion of the movie and even narrates some scenes, including an encounter between Gates, and IBM executives, and himself. “Here we were, this two-bit outfit, telling IBM we had the answer to their problems. The DOS? The Disk Operating System? To make all those zillion IBM computers compute? We didn’t remotely own anything like what Bill was selling them. Nada. Zip.”

SUBSCRIBE
Previous article
R.I.P to 10 dead tech products
Next article
Marketing (and life) tips from the stars at Adobe Summit

Dual-lens camera, wireless earbuds, and 8 other iPhone 7 features you need...

Apple iOS 8 unveiling: what you need to see