Sony Corp. is one of the original Android OEMs, and it released its first Google-powered phone in 2008. Although it’s not seen as much success as companies like Samsung in North America, for the past few years Sony has been putting out some excellent devices. The Xperia phones use Sony’s Omni-Balance design language, resulting in a series of attractive devices that have a similar look and feel. They all have a squared-off shape, metal sides, glass backs and are resistant to the elements, a feature not found on many other smartphones.

We liked 2014’s Xperia Z2 enough that it was one of our Top 10 Smartphones for Business last year, and when we looked at it successor, the Xperia Z3, we were also impressed. Now we have the latest Xperia, the Z5, in our hands, and like its predecessors, we also think it’s one of the best smartphone currently available. It further improves on what we liked about the Z2 and Z3 by incorporating an updated camera, faster octa-core processor, fingerprint reader and a refined design that fixes one significant issue we had with the older Xperias – the slippery glass back. 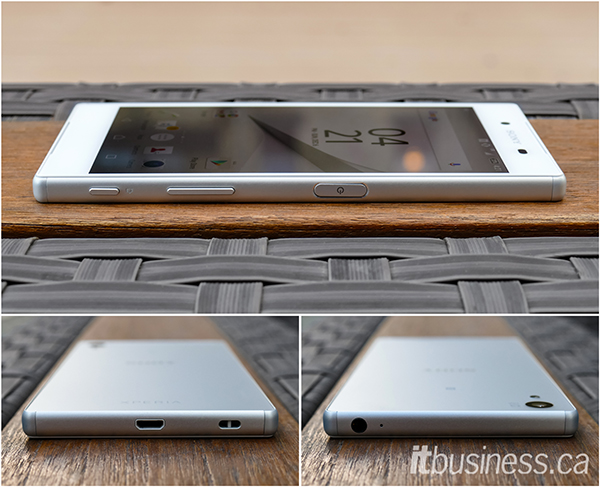 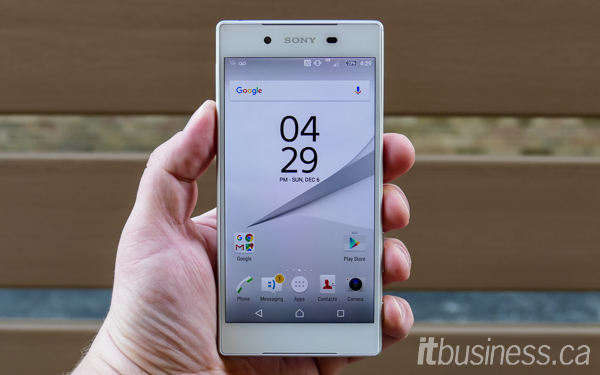 The Xperia Z5 is certainly an attractive phone even if it doesn’t look too different than previous models. However, there have been some key improvements to its design. Firstly, gone is the glossy glass back that was a huge fingerprint magnet (quickly turning the Z3’s back into an unsightly mess) and was also very slippery. The Z3 was prone to sliding off uneven surfaces and that could easily end in disaster. The Z5 has a more practical frosted glass back and a slight lip around its edge which both prevents the phone from sliding around and lifts the glass off the surface below to prevent scratches.

Size-wise, the Z5 is almost identical to the Z3. So while we wouldn’t call it a small phone by any means when compared to some of the other phones we’ve recently reviewed (Nexus 6P, LG G4), Sony’s smartphone is a lot easier to handle than them, especially when using it with one hand.

The Z5 still has metal sides and buttons like its predecessors, though the sides are a little flatter on this year’s model. One significant change is that despite retaining the same impressive water and dust resistance rating as the Z3, the Z5’s USB charging port is no longer covered by a door and awkwardly positioned on the side of the phone. It’s on the bottom like every other smartphone and open to the elements. Even though the port is water resistant, you’ll still want to avoid plugging the charger in if the phone is wet.

Unlike most other 2015 flagship phones, the Z5 still only has a Full HD (1080p) display and that may disappoint some. At 5.2-inches, though, it’s on the smaller size for a 2015 Android device, so it has a crisp PPI of 428 and you’ll have to look very closely to see a difference between it and the QHD displays of its competitors. One big advantage Sony has by using a Full HD instead of QHD screen is that its power drain is substantially less, which means that the Z5’s battery life is excellent, as you can see in the chart below. However, it isn’t as good as the Z3’s, which was outstanding.

Looking at the chart above, you can see that the Z5’s octa-core Snapdragon 810 SoC allows it to perform at the same level as other leading flagship phones. Like Huawei, Sony has also been able to tame the 810’s heat output, so it isn’t an issue on the Z5. It has a generous 32 GB of internal storage, a good step up from the Z3’s 16 GB and, of course, it still has a microSD slot so you can add more.

One big hardware addition to this year’s model is the fingerprint reader, a feature common to most 2015 flagship smartphones. Unlike other vendors who locate their sensor below the screen on a home button or the back of the phone, Sony has ingeniously incorporated it into the side power button. Unlocking the phone then is simply a matter of pushing the button with your thumb and briefly holding it there. 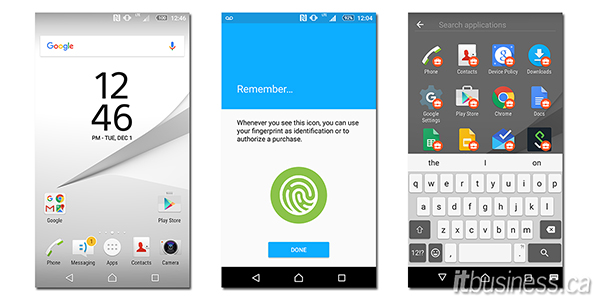 The Xperia Z5 runs Android Lollipop 5.1.1, so is a little behind the curve now that Android 6.0 is out. The Sony UI that runs on top is attractive and fairly unobtrusive. Although it’s certainly not stock Android, Sony’s changes are minimal and are mostly visual, such as the colour scheme (which can be changed with themes) and icons.

As a Sony phone, you will find quite a few pre-installed Sony applications that you may or may not find useful, and there are certainly more than necessary. Thankfully most can be uninstalled, not just simply disabled. Unfortunately, since the Z5 is only available through a carrier, the pre-installed carrier bloatware such as Bell’s apps cannot be removed.

Sony was wise enough to stick with Google’s Android for Work to allow for the separation of work and personal data on the Z5 when it is being used for business, and the Android for Work profile can be managed by most leading EMM solutions such as Airwatch and MobileIron.

The Xperia Z-series of phones have been using the same camera hardware since 2013, with only minor upgrades differentiating each model. It’s good to see then that the Z5 has a new 23MP Sony IMX300 Exmor RS sensor mated with a wide aperture f/2.0 lens, allowing for good low light pictures, as you can see from the image below. Sony has also added fast phase detect autofocus to the Z5, and it works as advertised allowing it to focus on a subject incredibly quickly. The camera software has also been updated and is much improved over the Z3’s. 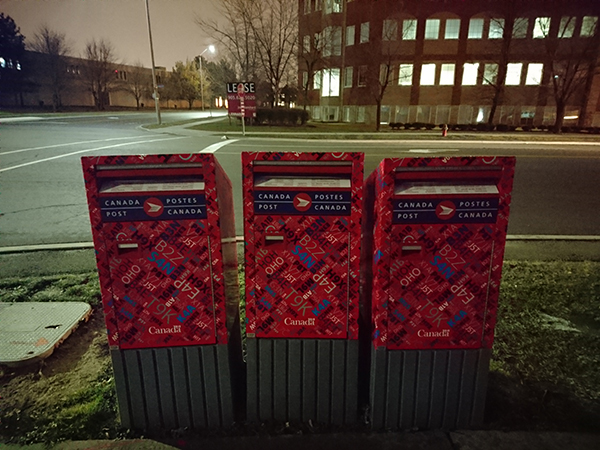 Despite the refinements to the Z5’s design, it does still look a little too similar to previous Xperias and we think that perhaps it’s time Sony tried something different. Also, even with the sensor upgrade, the Z5’s camera still lags behind ones found on other leading devices like the Nexus 6P and Galaxy Note 5, which is odd when you consider that both those phones use Sony image sensors too.

It’s also disappointing to see a new phone released not running the latest version of Android, and although we are confident that Sony will update the Z5 to Marshmallow, the question is how long will that take. The fingerprint reader is a little fussy sometimes and doesn’t always register your print making you scan multiple times before you can log in. Hopefully, this is something that can be fixed with a software update. Lastly, the Z5 is unfortunately only available on one national carrier, Bell Mobility. 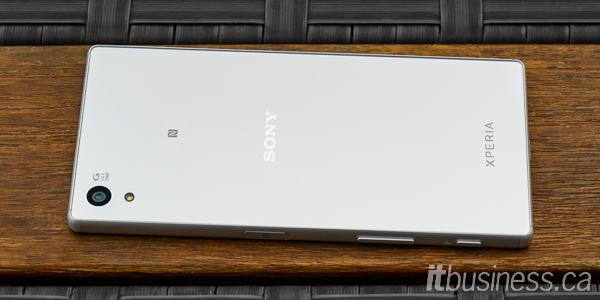 A refined Xperia at a great price

Overall, notwithstanding the shortcomings mentioned above, the Sony Xperia Z5 is an excellent smartphone and certainly one of the best released this year. It has an attractive design, is made from premium materials, has excellent performance thanks to its powerful SoC, and has some of the best battery life of any 2015 smartphone. Although its camera isn’t as good as some of its competitors, it’s by no means bad and will satisfy most.

There is, however, one big advantage that the Z5 has and that’s its value for money since it’s available for as low as $50 on a contract and is $650 outright, which is very reasonable for a flagship smartphone in Canada today. The Xperia Z5 is available in Graphite Black and White across Canada from Bell Mobility and in Saskatchewan from SaskTel.