Android is the most popular OS globally and notably, unlike iOS and Windows Phone, is an open platform. This has led to myriad versions of Android with different UI’s and UX’s that vary in quality from the huge number of OEMs making Android phones. Out of all this variety, there is one version, stock Android, that represents the purest form of Google’s vision for its OS, and each year it releases a selection of Nexus devices designed to showcase the latest version.

In 2013, Google launched the 5-inch screened Nexus 5, and it proved to be an excellent and very popular device. It ran the latest version of Android, had great specifications, and moreover was also very reasonably priced. Then in 2014, it followed up with the 6-inch Nexus 6 that wasn’t as well received due to its size and higher price.

For 2015, Google has wisely now decided to offer two Nexus phones. First there is the Nexus 5X, which is a less-expensive all-plastic replacement for the Nexus 5 and second there is the premium metal Nexus 6P that we are looking at here. Both these phones are the first devices to run Android 6.0 Marshmallow. Also of note is that the 6P is made by Huawei, which is a big vote of confidence in this Chinese OEM from Google and its first prominent device launched in North America. 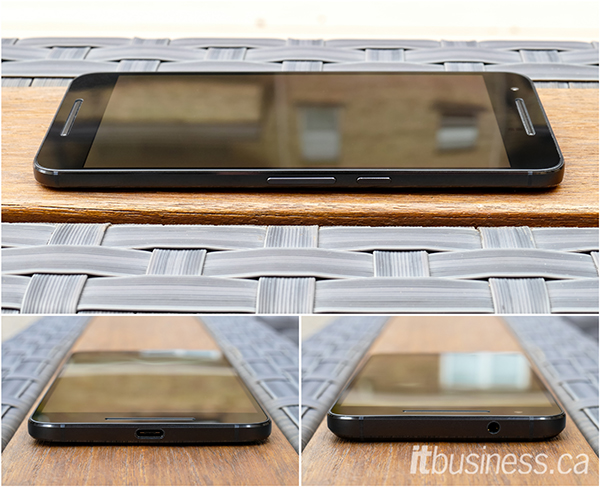 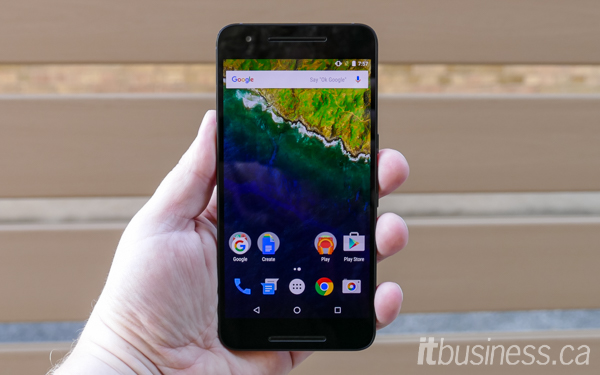 The 6P is a handsome phone and is the most attractive Nexus phone released so far. It’s an all-metal device, apart from a short plastic cover at the bottom of the back and the plastic camera area at the top. This upper section also houses the wireless antennas. Although it bulges out of phone slightly, it doesn’t detract from its overall look. The front of the 6P is covered in Gorilla Glass 4, and you can see the dual front-facing speakers at the top and bottom, a much-appreciated feature absent from many other smartphones.

The Nexus 6P has a crisp WQHD AMOLED 5.7-inch display and has a screen-to-body ratio of 74%. This means that despite its big screen, it is still fairly compact, and comparable to the Samsung Galaxy Note 5, another phone with a 5.7-inch display that also feels a lot smaller when used. Like the Note 5, the 6P has a fingerprint reader, though since this is a Nexus phone the are no physical Android navigation buttons (they are all on-screen) on the front to house it. Instead, the Nexus Imprint sensor is located on the back of the phone where your index finger naturally rests when you hold it. It isn’t a button, just a sensor, so you only need to touch it to both wake up and unlock the phone, which it does in an instant. For security, all your encrypted fingerprint data is only stored on your phone and never shared with Google or any installed apps.

The internal specifications of the Nexus 6P are top of the range. It uses an octa-core Snapdragon 810 SoC and although this chip has a reputation for running hot, on the 6P it looks like Huawei has tamed it, so this is no longer an issue. It comes with 32, 64 or 128 GB of internal storage, but as with previous Nexus phones, there is no microSD slot.

Looking at the performance table above, you can see that the Nexus 6P is only second to the Galaxy Note 5 is overall performance. It is, therefore, one of the most powerful smartphones you can buy today. Its battery life is also impressive, coming close to the time recorded by the Note 5. Keep in mind the PCMark test runs a benchmark continuously to test the battery, so the figure above is not reflective of real-world battery life, which from our experience can easily exceed one full day.

For charging the 6P uses the new USB Type-C port, which has a reversible connector. Although it doesn’t support Qualcomm’s Quick Charge technology, the included 5v/3A 15W charger does rapid charge the phone in a similar fashion. 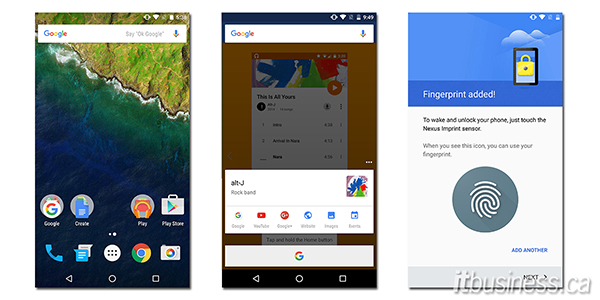 As a Nexus phone the 6P, of course, runs the latest version of Android and will also be one of the first devices upgraded to the next version when it is released. Nexus phones also get monthly security updates directly from Google, unlike other Android phones that require both their manufacturer and the carriers to validate them first.

At first glance, Android 6.0 doesn’t look too different than 5.0, but Marshmallow has some important new features and improvements.  It natively supports fingerprint scanners, such as the abovementioned Nexus Imprint reader, and its security has also been improved, with boot verification, controllable granular application permission settings and full-disk encryption is turned on by default.

Along with its security improvements, Android 6.0 has a new vertically scrolling app drawer that shows your most used apps at its top, and there is a new contextual search feature called Now On Tap. This feature searches for information based on the content of what you are currently doing, be it listening to music or composing an email. For enterprise device management and for separating your personal apps from your business apps the 6P uses Google’s excellent Android for Work offering, which can also be managed by third-party EMM tools too. 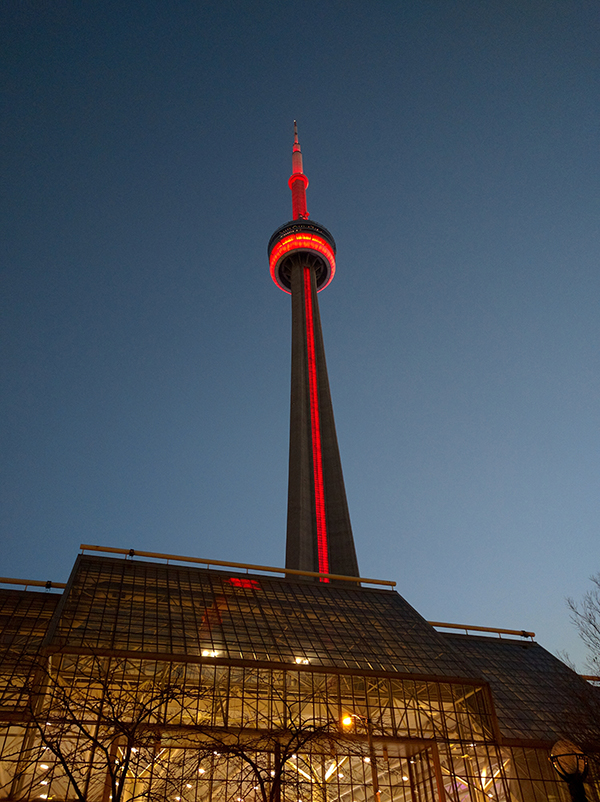 The cameras of previous Nexus phones have never impressed, but with the 6P it looks like Google and Huawei have decided to rectify this. The 12.3 MP Sony sensor used on both the 6P and Nexus 5X has very large pixels (1.55 µm), which means its performance in low light is excellent, and this sensor has been combined with good optics and fast laser autofocus. We were very impressed by the 6P’s camera, and its results were some of the best we’ve seen from an Android phone.

As you can see, there is a lot to like about the Nexus 6P, so we have very little complain about. The lack of microSD storage might be an issue for some, but with the option to buy it with 64 or 128 GB of storage, this isn’t a big problem. It is unfortunate, though, that as of now Canadian carriers are only selling the 32 GB model. The bigger capacities can only be bought directly from Google.

The 6P’s display is also not as bright as some of its competitor’s, and although the camera hardware is very good, its camera software is pretty basic. Thankfully there are good third-party camera apps that can be downloaded from the Play Store. 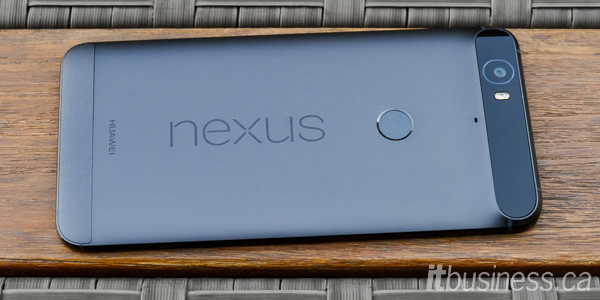 The best Nexus yet

Along with the Galaxy Note 5, the Nexus 6P is the best Android smartphone you can currently buy. The Samsung device is a slightly more powerful, has slightly better battery life and has better camera software, but is more expensive. The 6P is a better value, and is a Nexus device, so will always run the latest version of Android, and Huawei has produced a beautiful, powerful showcase for Google’s vision of what an Android smartphone should be.

The Google Nexus 6P is available from Google directly starting at $699 and from Bell, Rogers, Telus, Wind Mobile and Videotron starting at $100 on a 2-year term.