Over the years, LG has produced smartphones that have come close to competing with the best devices the big two (Samsung and Apple) have to offer but there’s always been something that prevents them from being on the same level. For example, although last year’s LG G3 was a very good phone, it was let down by its display and below average battery life. Despite that, we did still think it was one of 2014’s Top 10 smartphones for business, and it was a big improvement over 2013’s G2, demonstrating that LG is steadily refining its offerings.

This year’s flagship phone is the LG G4, which at first glance looks a lot like the G3. However, under the hood there have been some notable improvements. LG has also focused on making the G4’s camera one of the best of any smartphone, and it also bucks industry trends and still includes a microSD slot and a removable battery.  We do think that the G4 is one of the best smartphones of 2015, and you can read on to see if LG has finally produced a phone equal to the latest from its bigger rivals. 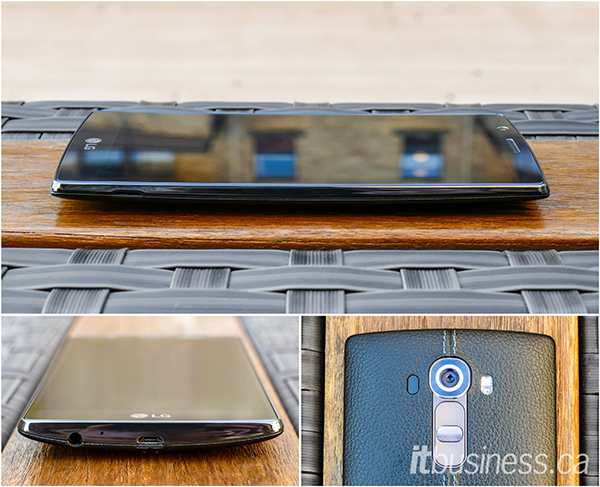 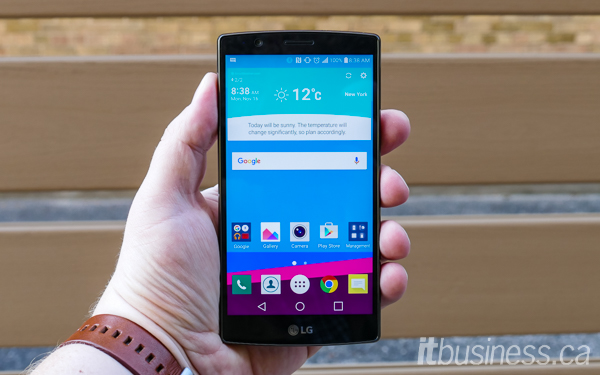 As mentioned above, the G4 does look a lot like its predecessor, and unlike its competition, LG has not significantly changed the design of its 2015 lineup. The G4 is still an all-plastic phone so you won’t find any of the metal or glass used on Samsung’s latest devices. Eschewing the use of premium materials isn’t necessarily a bad thing, since you can still craft a quality product without using them, and sticking to its design guns allows LG to still incorporate a removable back which facilitates the removable battery, a rarity on 2015 phones.

In one concession to the demand for a higher-end finish, the G4 comes with both a plastic and a handsome hand-stitched black leather back (pictured below). You’ll also see that the G4 still has the characteristic power and volume buttons below the camera on the back of the phone. Their position may seem odd at first, but once you get used to them, they feel very natural to operate with your index finger when holding the phone.

Despite its big 5.5-inch screen, the G4 is a still quite a compact device (for its size), with a good screen-to-body ratio, and it is practical to use in one hand. You’ll also notice that the G4’s screen has a gentle vertical curve, a feature unique to LG’s phones, which also helps make it easier to use in one hand.

The WQHD screen itself uses LG’s new IPS Quantum technology, which LG says makes it brighter, have better contrast, more color accurate, and more power efficient than the one found on the G3. Our testing does show that it is brighter than the G3’s and it is also better matched to the rest of the phone’s hardware.

Internally, the G4 uses a hexa-core Snapdragon 808 SoC, which while not the fastest mobile processor available, is still very powerful and more than sufficient to power the G4. Still, when looking at some of the performance results below, you can see it doesn’t quite match up to some of its competitors, but it’s significantly faster than the G3. It has 3GB of RAM and 32GB of storage, which should be enough for the average users, but for those that it is isn’t, the G4 has a micro SD slot.

Looking at the battery life results above, you can see that the G4’s has improved over its predecessor’s and is about on par with the Galaxy S6. The new Xperia Z5 does beat all the phones being compared, but that is thanks to its 1080p screen that uses a lot less power. Even though the G4’s battery life isn’t the greatest, it does have the benefit of a replaceable battery, so if you carry a spare, it’s just a quick swap to get back to 100%, something none of the other 2015 phones above can do. It also supports Qualcomm’s Quick Charge 2.0 tech for rapid charging. 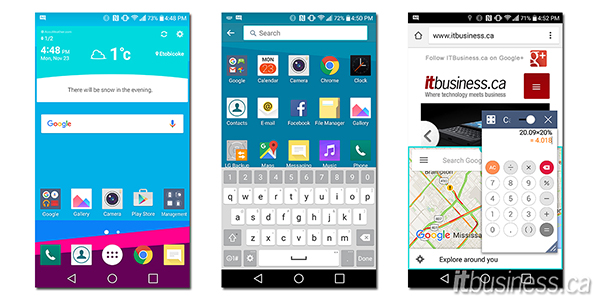 On the software front, the G4 runs Android 5.1 (Lollipop) with LG’s UX 4.0 skin, which mostly adheres to Google’s Material design guidelines, and looks similar to the UI of the G3, with some additional refinements and incorporation of Lollipop’s notification system. LG, like Samsung, has learned not to overload its current phones with useless applications, and the ones LG does include are useful and work well. The G4’s software has a dual-window multitasking mode and useful resizable QSlide mini-apps like the calculator shown in the third screenshot above.

One of the G4’s biggest upgrades from the G3 is its camera. Although the G3’s camera was good, it was outclassed by much its competition because it used a dated sensor. In contrast, the G4 uses one of Sony’s latest smartphone camera sensors and pairs it with a wide aperture f/1.8 lens (the widest of any smartphone), laser autofocus and colour spectrum sensor for more accurate white balance. This potent hardware is combined with an easy to use automatic mode and one of the most advanced manual modes of any smartphone. You can adjust ISO, white balance, shutter speed, exposure and manually focus on the G4. This combination of excellent camera hardware and software means the G4 takes some of the best smartphone photos we’ve ever seen. 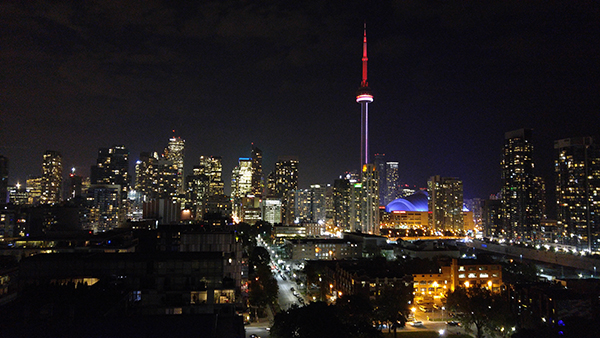 The G4 doesn’t come with a fingerprint scanner, a very useful authentication feature most other 2015 flagship smartphones come with and one that we’ve grown accustomed to using. LG’s UX 4.0 Android skin is still a step behind in looks and performance compared to the latest version of TouchWiz on the Galaxy S6 and Note 5. Additionally, the G4 is stuck on Android 5.1, and won’t be updated to 5.1.1. Instead, LG is moving it straight to Android 6.0 (Marshmallow), but that update won’t arrive until Q1 of next year. Software update speed is not one of LG’s strengths. Lastly, even though the G4 is listed as a compatible device on Google’s site, the Canadian models don’t seem to support Android for Work for device management and application containerization. 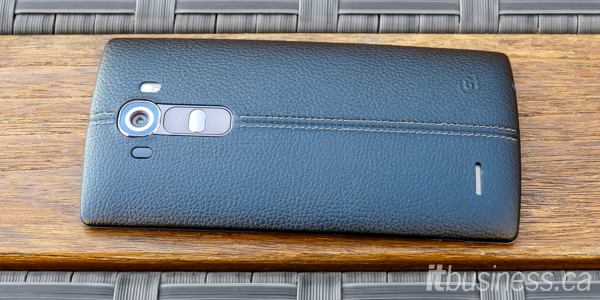 The LG G4 is a well-made powerful phone that still includes features like a removable battery and a microSD slot, and it has one of the best cameras we’ve tested. Although there are a couple of other phones we’d rank a little higher than the G4, we certainly still think that it is one of the best smartphones currently available, and it’s also less expensive than the latest from Samsung and Apple.