Even though Lenovo now owns the company instead of Google, for some years Motorola’s Moto series of smartphones have been the closest you can get to a stock Android device without going with a Nexus. Although its top-end Moto X Pure decided to skip Canada in 2015, the excellent entry level third-gen Moto G and the Moto X Play were sold up here, with the Play being one of our 2015 Top Smartphones for Business. As a mid-range phone, the Play wasn’t made from any premium materials or equipped with the fastest hardware, but we still found it performed well, had outstanding battery life, and ran almost stock Android, which our opinion is still the best version of Google’s OS.

The 2015 Moto G was also a good device but didn’t quite make the cut, being just a little too low-end to be considered for our Top 10.  However, for 2016 Motorola has updated the fourth-gen Moto G to be more of a mid-range smartphone, with a larger screen and higher-end specifications that basically supplants the Moto X Play in Motorola’s lineup this year. Again, although it can’t hold a candle to the best that HTC, LG, and Samsung have to offer, it’s also significantly more affordable and for business users on a budget, the Moto G4 Plus is our current smartphone of choice. 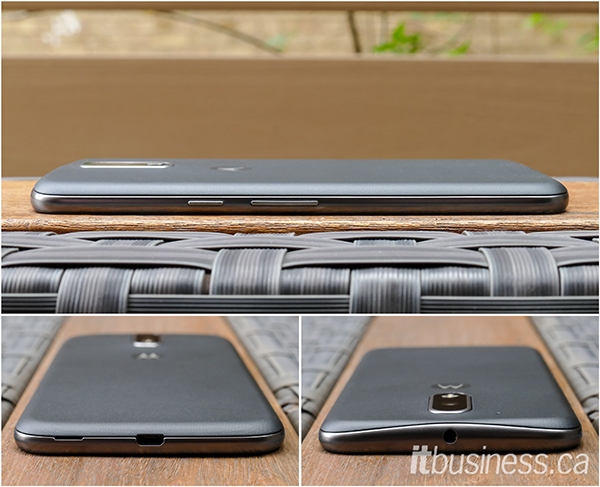 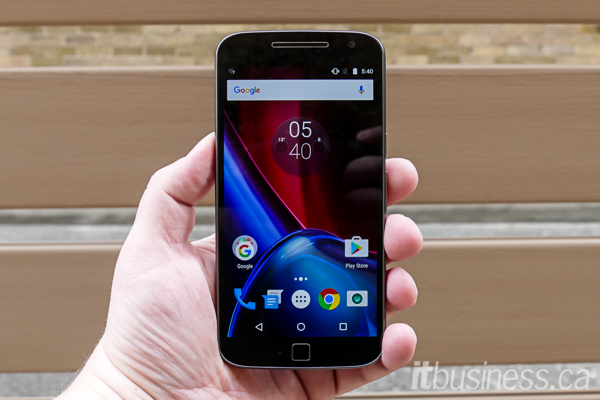 As a mid-range smartphone, don’t expect to see any premium materials here — the Moto G4 Plus is an all-plastic affair. However, like the Moto G3 and X Play, the G4 Plus is still a solidly crafted device whose appearance belies its budget nature. Its design does eschew the attractive metal band that ran down the middle of last year’s models but it retains the Motorola logo dimple on the back, which becomes a comfortable place to rest your index finger when holding the phone.

Like the Moto X Play, the G4 Plus has a 5.5-inch full HD LCD panel, so it’s perhaps not as crisp as the QHD displays found on the current top-tier smartphones, but it’s still a good looking screen. Its colour accuracy looks solid, and it is quite bright, topping out a 460 nits, making it usable under bright sunlight. Size-wise, the G4 Plus is a tad taller and wider than the X Play, but is noticeably thinner – the Play was one of the chunkiest phones we tested last year. It’s, of course, considerably bigger than the 5-inch Moto G3, but we feel that 5.5-inches is now the sweet spot for smartphone screen size. 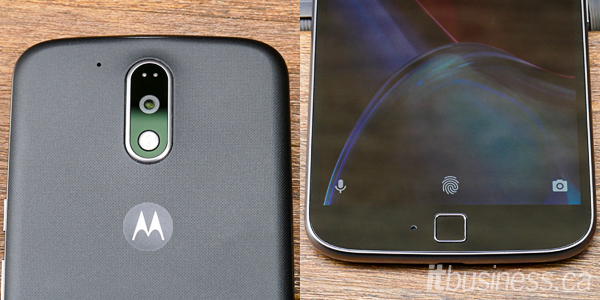 The big hardware addition for 2016 is a fingerprint reader, located below the screen. With the growth in the use of mobile payment solutions and also the ability to use biometrics to secure sensitive work data on mobile devices, a fingerprint reader is almost a necessity for a modern business smartphone, so it’s good to see one on a more affordable device like this. Unlike most other phones, it’s square rather than circular, but this difference did not seem to impact its accuracy. Of note, despite its location, it doesn’t also function as a home button, with the Moto G4 Plus still using the standard Android on-screen soft buttons.

When it comes to performance, you can’t expect a $400 phone to be at the same level as devices that cost double, and the numbers above reflect that. However, the Moto G4 Plus does outperform Motorola’s 2015 Canadian flagship, the X Play, and when you compare its PCMark system score, the G4 does quite well. In day-to-day use, especially with business applications, you’d be hard-pressed to see any difference between the G4 Plus and its pricier rivals.

The Moto G4 Plus has a substantially bigger battery than the less power-hungry Moto G3, and a noticeably smaller one than the huge 3,630 mAh cell of the Moto X Play, yet the G4 Plus has better battery life than both of those devices. In fact, we praised the X Play for having battery life that was able to “surpass by far every other smartphone we’ve tested this year,” and it looks like Motorola has managed to repeat that feat with the G4 Plus this year. 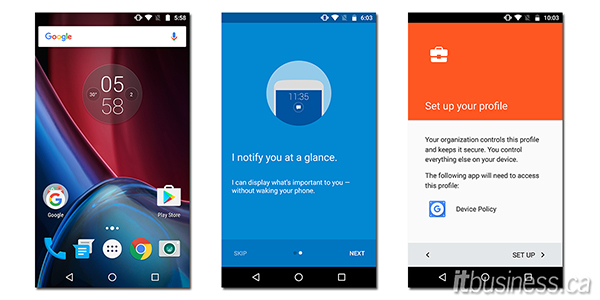 On the software side, the Moto G4 Plus runs an almost stock version of Google’s latest OS, Android 6.0.1. In previous years, Motorola’s phones have been some of the first to get updates to the newest version of Android after Google’s Nexus phones, and we assume it will be no different this year. The G4 Plus also includes some of Motorola’s useful additional software, Moto Actions, which adds some limited gesture control to Android, and Moto Display for always-on screen notifications. The Moto G4 Plus supports Android for Work for mobile device management (MDM) if you plan to use the G4 Plus as a BYOD or COPE smartphone.

The cameras on last year’s Moto G3 and X Play were good. But not great. The Moto G3 reused the sensor from the 2014 Moto X and produced decent pictures for a phone at its price point, and the X Play’s 21 MP Sony IMX230 sensor performed well in good light but suffered in low light. For 2016, Motorola has impressively equipped its mid-range phone with an excellent camera. Its large 16 MP 1/2.4” Omnivsion OV16860 sensor performs well in all lighting conditions, and Motorola’s camera software has received a big upgrade with the option for full manual control now. Its score of 84 in DxOMark’s Mobile camera test is the same as that of the Nexus 6P and iPhone 6S, both devices with cameras we’ve previously praised. 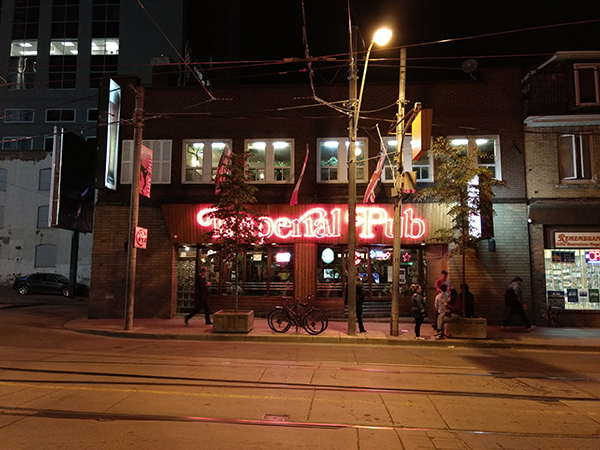 We’re not going to knock the G4 Plus too much for its performance, because, after all, it’s a mid-range phone, but it would have been nice if Motorola could have equipped it with something perhaps a tad better on the GPU side. If you look at our benchmark results chart above, it didn’t do very well in the graphics tests. Motorola also bizarrely left off NFC, so although the Moto G4 Plus has a fingerprint reader, it’s not going to work with tap-and-pay payment solutions. The fact that the reader doesn’t act as a home button is annoying too because of its placement, and we often found ourselves trying to push it to no avail. Furthermore, we do think that the G4 Plus’ design has lost a bit of the personality of Motorola’s 2015 devices – the G4 is perhaps a bit generic looking. Lastly, the G4 Plus is missing the useful Moto Voice control feature found on the Moto X Play. 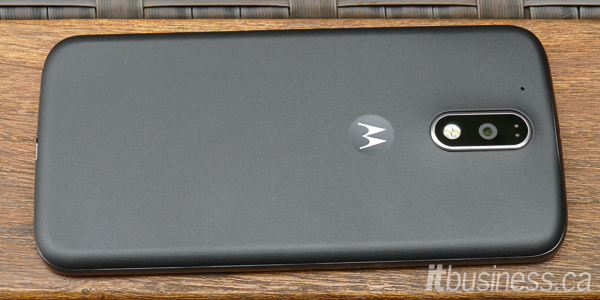 As they did in 2015, Motorola has delivered one of the best smartphone values available today, and for Canadian business users on a tight budget looking for a new phone, or IT departments looking to purchase their employees new devices without going over their quarterly budget, the Moto G4 Plus is an excellent choice. It is available from Koodo, Rogers, SaskTel, Telus, Wind Mobile, and Virgin Mobile, priced at $400 outright and from $0 on a 2-year term.