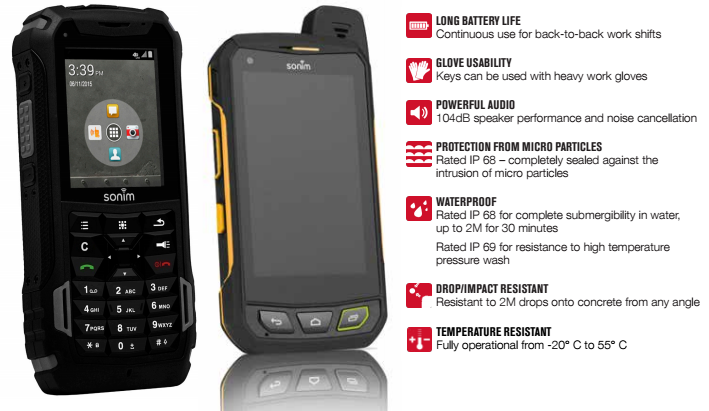 Designed to work in extreme environments like the Alberta’s oil sands, the new XP5 and XP7 smartphones from Sonim Technologies are resistant to dust, water, oil and chemical, temperature, extreme pressure and drops onto concrete higher than two metres.

Even if you don’t deal with these extreme situations regularly, you can be at least sure that these phones will survive falling into any snowbank this winter.

Both phones feature Push-to-Talk buttons for instant communication with team members. The phones also provide other features like powerful audio so that communication is clear in noisy environments

The Sonim XP5 is more of a traditional “candybar” mobile phone featuring a dial pad and a 2.4-inch screen protected by Gorilla Glass 3. Its 3180 mAh lithium-ion battery provides enough power for 25 hours of talking, and 25 days of standby.

The Sonim XP7 is a smartphone with the Android 4.4 Kit Kat OS. Its 4-inch touchscreen uses Corning Gorilla Glass 2 with glove touch so you don’t have to take your gloves off to use an app or make a call. The 4800 mAh battery provides 40 hours of talk and 1,000 hours of standby.

They also come with a three-year comprehensive warranty.

Both phones are also fully operational in environments as hot as 55°C but also as cold as -20°C, which is good because, as Game of Throne’s House Stark says, winter is coming.

The Sonim XP5 is available from Rogers at $69.99 with a 2-year contract, and with Bell and Telus charging around $200. It’s available for around $400 from these carriers with no contract.

David Hamiltonhttp://davidihamilton.com/
As a journalist, I delve into topics where technology and society collide. I’ve written for Canadian newspaper The National Post, and posted more than 3,000 articles on technology related to the Internet as a staff writer for trade publication the Web Host Industry Review. And I host and produce a podcast called Techish.
Previous articleTop business smartphones for 2015: LG G4
Next articleMississauga’s city council rubber stamps new IT master plan