Apple Inc.’s annual iPhone update for 2015 came in the form of the iPhone 6S, with no major differences to speak of compared to the iPhone 6, but it didn’t really need to do that much to remain one of the absolute best products in the category.

In fact, this device is reinforcing the growing consensus that “S” model iPhone devices are the ones you should buy, if you’re in the market for an iPhone at all. While the year we step up another full number and get a new design is flashier and more interesting, the next year when Apple finely tunes the inner workings and hones the product’s interface are when you get the best value. This year, you even get the added feature of Force Touch, which has a lot of potential to change the way you interact with your device in the near future – even if not immediately.

I reviewed the iPhone 6S Plus after using the iPhone 6 Plus as my main mobile device for more than a year. My experience was pretty much the same with the 6S as it was with the 6 – relishing the long-lived battery life, gaping at content on the big screen, and enjoying all the apps that you can shake a stick at. Read on to hear about what sets this iPhone apart from last year’s model and the rest of the competition. 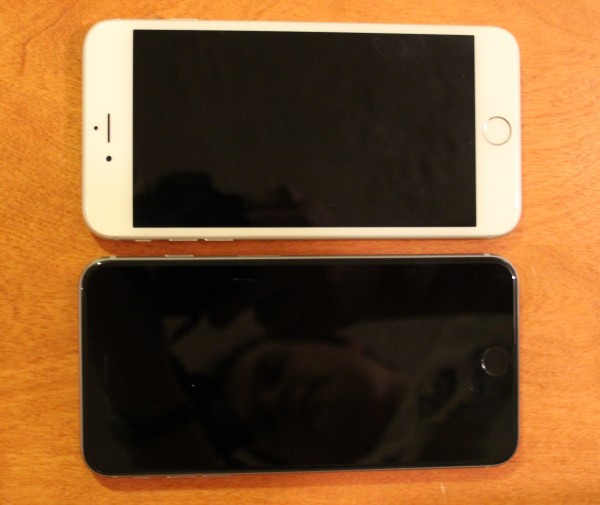 Force touch is a great new addition, and also will lead to great opportunities for Star Wars related puns as The Force Awakens is released later this month. (If your friend has a new iPhone 6S, try whispering in your best Obi-wan impression “Luke, use the force touch, Luke.”) It takes only seconds to learn and I found its use immediately apparent as soon as I learned how to use it.

A harder press on your messages icon reveals some of your most-often used contacts so you can more quickly launch the window. The same happens on your phone icon, so you can quickly call some of your favourites instead of extra taps or typing in a contact name. As more developers learn of this feature, I think it will prove to be just as useful as the context menu in Windows, brought up by the right-button mouse click. It’s a brand new feature, so most apps haven’t taken advantage yet, but expect to see it soon enough.

Beyond this feature, there’s not much different about the iPhone 6S or 6S Plus compared to the previous year’s models. Also new with iOS 9 is the ability to activate Siri just by calling out with your voice, and this is available to iPhone 6 users as well. The 6S models are really about incremental improvements, and building a more robust device that is sure to please its owners.

There’s a reason that Apple is able to charge a premium price for the iPhone, even in a market where competition is now rife. The company that was the innovator for the modern smartphone experience has a mastery over delivering a simple, fast, and yes – delightful experience when you’re using the iPhone. The technology feels like it melts away as you accomplish what you intended and enjoy content on the gorgeous screen.

One of the best features of the iPhone continues to be its camera. Apple’s branded iSight camera is upgraded to take 12 megapixel stills and capture “4K” video. It continues to offer optical image stabilization, one of the most important features of making handheld shots with a small device look good.

bring your desired subject into focus. Autofocus will usually do even that for you, and then it’s a quick tap on the on-screen shutter button to capture the image. There’s no delay between your tap on the screen and the photo being captured, which you will see with many devices, and this instantaneous response results in very satisfying photography.

Having just come from using an iPhone 6 Plus, I noticed the newer hardware is a lot faster to respond. A new CPU makes everything just that much snappier, including the time it takes to unlock the device with the fingerprint scanner. Running multiple apps at a time proves to be no problem and you can quickly switch between running apps with a double-click of the home button. Even booting up the iPhone 6S is fast, taking only seconds before you can start using it.

Games also run well, some with graphics that will surprise you as being capable of running on a mobile device. Do keep in mind that running a 3D-graphics intensive game will really drain the battery faster than usual, though, as I discovered when playing Telltale Games Game of Thrones. 

The iPhone’s real strength is its great selection of high quality apps. Whether you’re looking for social networking, news, live TV streaming, productivity, or music, it’s all at your fingertips through the App Store. If you didn’t get at least the 64 GB option, you’ll probably find yourself filling up the hard drive with apps quickly.

Apple’s eco-system is often its best strength, but sometimes its resolute protection of that eco-system is to its detriment. Where Apple has designed specific services or e-commerce channels for iOS users, it doesn’t allow others fair chance to compete – even if that’s what the user really wants.

Take for example Kobo, my e-reader store of choice. Because Apple sells e-books through its own iBooks channel, Kobo users can’t buy e-books from an iOS device. You can download a preview of a book, and access any book that is already in your collection, but you’ll have to take to the web to buy a new addition to read. This limitation isn’t a problem on Android devices.

Then there’s my Pebble Time smart watch. If I had an Android, I could respond to text messages by dictating with my voice. But Apple keeps a tight grasp on this service for wearables, limiting it to only the Apple Watch. So while my hardware is capable of delivering such a service, Apple is choosing to limit my options because it wants me to buy hardware of its own manufacture. I don’t think that’s fair, and it feels like Apple is being overly pushy in controlling how I want to set up my own personal technology style.

Similarly annoying is the iPhone’s constant nagging for you to turn on iCloud, even if you choose to use a different cloud storage system and backup your device on a computer through iTunes.

Plus, there’s limits to the customization of this device. There’s still no widgets available, and you can’t open any apps in a split screen mode yet. These are things Android users take for granted.

Read the next review:
Top business smartphones for 2015: LG G4

The price of a new iPhone is enough to make most people think twice. But a good subsidized plan from any of the major incumbent carriers helps soothe such concerns.

If you want a reliable and easy-to-use device that will deliver what you want, when you want it, you can’t go wrong with the iPhone. On the other hand, if you’re a technology connaisseur that wants to control every aspect of your experience in a specific way, then you might meet some frustration when running into Apple’s arbitrary limitations.