We set out to review the top 10 business smartphones for 2014 so you know what device is right to buy for you. While some of devices didn’t quite make the cut to our top 10, we felt they were worth a series of five shorter reviews. We continue our reviews here with the Sony Xperia Z3.

The Xperia Z3 is the latest premium smartphone from Sony. It’s the successor to Z2, which we reviewed when it was released earlier this year. The Z3 continues to use Sony’s Omni-Balance design, and like previous Xperia Z models, has metal sides, a glass back, and is resistant to the elements. The Z2 is one of our Top 10 Smartphones for Business for 2014, so let’s see if Sony’s latest is as good as its predecessor. 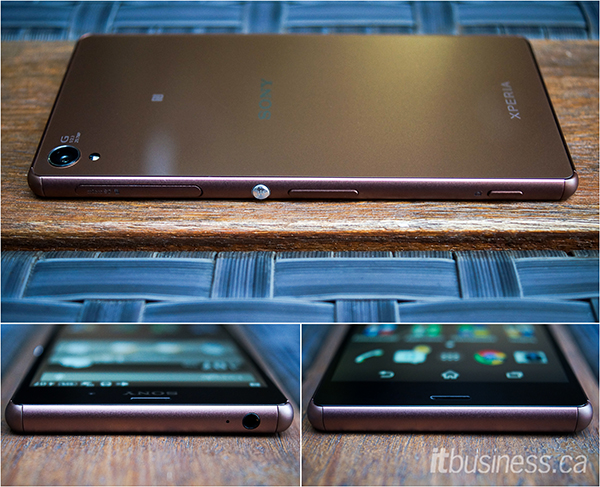 The Z3 uses the latest iteration of Sony’s Omni-Balance design language and features curved all-metal sides, rather than the flat ones of previous models. This rounded shape makes the Z3 more comfortable to hold than its predecessor. While it still has a glass back that is inherently fragile, the corners of the Z3 are now plastic, designed to absorb any impact and prevent damage if it is dropped on its corner.

It is still a fairly big phone, but the latest Xperia has gone on a diet and is a little more compact, thinner and lighter than the Z2, despite having the same 5.2-inch screen size. We also like that it is available in more than just the standard black or white colours that so many other current smartphones come in. We tested the very attractive copper model, available from Bell, Rogers, and unlocked from Sony. 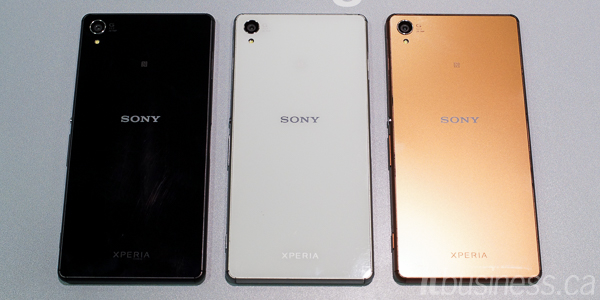 Like its predecessor, the Z3 is a waterproof phone, but it has been upgraded to be IP65/IP68 rated, making it even more resistant to dust (enough that it can be called “dust proof”). This feature allows you to use the Z3 in inclement conditions without having to worry about it getting damaged.

The Z3’s screen is a 5.2-inch 1080p IPS LCD display that uses Sony’s Triluminos technology to display a wider range of colours that other LCD phone screens. It is very crisp, has great viewing angles and is also very bright, much brighter than the Z2’s display, which was its one failing.

Internally the Z3 is powered by the same Snapdragon 801 SoC (system on a chip) that so many other 2014 flagships phones use, including the Z2. However, the Z3 has been upgraded to use the fastest 2.45 GHz AC variant. While it still has only 16 GB of internal storage, it has a microSD slot so you can add additional storage.

Even though the Z3’s 3,100 mAh battery is slightly smaller than the Z2’s 3,200 mAh, we tested it to have longer life than its predecessor. The 18 hours of life we recorded using the BatteryXprt test ranks the Z3 as one of the longest lasting smartphones we’ve tested. 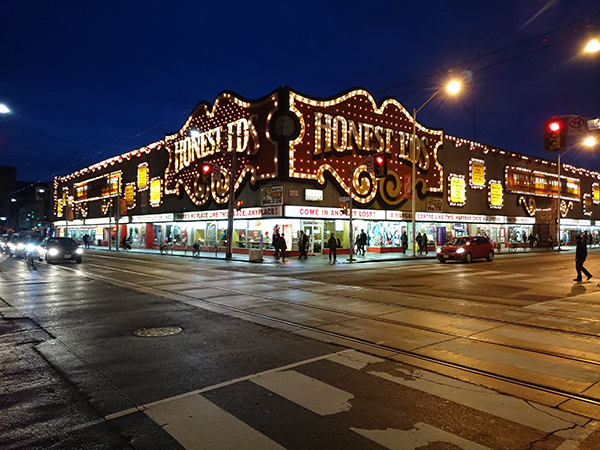 The Z3’s camera uses the same 20.7 MP Exmor RS sensor as the Z2, but has a new wider 25 mm lens that can capture more of what you see. It can also shoot up to ISO 12,800, allowing it to take usable (albeit very grainy) pictures in very low light conditions. You can see a low light sample from the Z3 camera above.

For connectivity, the Xperia Z3 supports up to 10 LTE bands, which means it can be used worldwide. Since you can buy it unlocked from Sony, you can also use it on almost any cellular carrier worldwide. 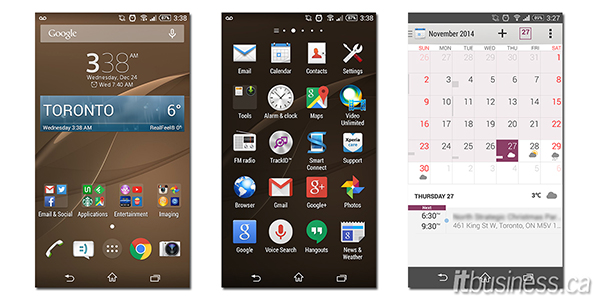 The Z3 runs Android 4.4.4, and the Sony UI running on top of it has been updated with new larger icons that make it look a little more like stock Android. Other than these small tweaks, there have not been that many changes of the software side since the Z2. Sony’s UI is attractive, fast and fluid, and features a number of additional management and security features making it a good choice for business users, either SMB or enterprise. You can read more about Sony’s software in our full review of the Z2.

Lastly, while its outright price is still comparable to other 2014 flagship phones, it is nice to see that on a two-year term the Z3 is a little more reasonably priced than its competition. Also, unlike the Z2, the Z3 is available on multiple Canadian carriers.

While the Z3’s glass-backed design is very attractive, it does have drawbacks. To start, it is very slippery and if you place the Z3 on a flat surface that isn’t completely level it can quite easily slide off, often onto the floor. Also, no matter the type of glass it is made from, it is still going to be more susceptible to damage than a plastic or metal back. A case is a must-have for the Z3, which ends up hiding its good looks.

The Z3’s screen is very bright, but its colour balance is too cool, casting a blue tone over everything. The camera, while upgraded from the Z2’s, still suffers from inconsistent performance when using the default ‘Superior Auto’ mode. You have to work a lot harder to take good pictures with it than the cameras on other high-end smartphones.

While the Z3’s Sony UI is fast and fluid and doesn’t make too many changes to the core Android experience, its appearance is starting to get a little dated. This is especially apparent when you compare its look and feel to the latest version of Android, 5.0 Lollipop. 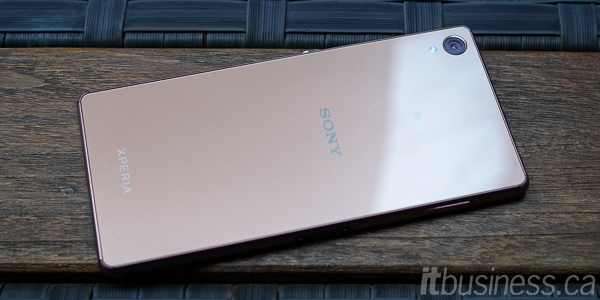 Read the next review:
Nokia Lumia 635: here’s what you sacrifice for this budget smartphone

The Sony Xperia Z3 is an excellent smartphone and a great choice for business users. In fact, if we were to update our ‘2014 Top 10 Smartphones for Business’ series, we’d replace the Z2 on the list with the Z3. It features everything we liked about the Z2, with a more attractive design, brighter screen, and improved camera. What’s more, unlike the Z2 that was only available on one carrier in Canada, the Z3 is available on Bell, Rogers, Telus and Wind Mobile.