Nokia Lumia 635: here’s what you sacrifice for this budget smartphone

We set out to review the top 10 business smartphones for 2014 so you know what device is right to buy for you. While some of devices didn’t quite make the cut to our top 10, we felt they were worth a series of five shorter reviews. We continue our reviews here with the Nokia Lumia 635.

When it launched last year, the Nokia Lumia 635 was the first smartphone released with the latest version of Windows Phone 8.1. While it is an entry-level device, it is a great choice for business users looking for a reliable basic and inexpensive LTE smartphone.

Let’s see what we liked and didn’t like about it.

For an inexpensive phone, the Lumia 635 is surprisingly well-made, despite an all-plastic exterior. While it is a little bland looking, the fit and finish is very good. There are also optional coloured backs that can make it a little more exciting to look at – our pictures have the green one installed. It’s quite compact when compared to most current smartphones, including the Lumia 830 which we recently reviewed.

The 635’s screen is 4.5-inches and the resolution is only 854 x 480. While this pales in comparison to most other current smartphones, the screen still looks reasonably crisp (at 221 ppi) simply because it is on the smaller side at well under 5 inches. It is very good quality, being a bright ClearBlack IPS display with good viewing angles. It’s also covered in scratch-resistant Gorilla Glass 3. A lot of other budget smartphones have sub-par screens to save costs, and thankfully the Lumia doesn’t.

Internally the Lumia 635 is reasonably powerful (at least for an entry-level device), with a 1.2 GHz quad-core Snapdragon 400 SoC, which is the same as found in the much more expensive Lumia 830. While it only has 8 GB of storage, there is a microSD slot to add up to 128 GB more.

The removable battery is small, at 1,830 mAh. However, the combination of Windows Phone’s power efficiency and the not exactly taxing hardware means the battery life of the Lumia 635 is still very good. Also, the call quality of the Telus model we tested was excellent. 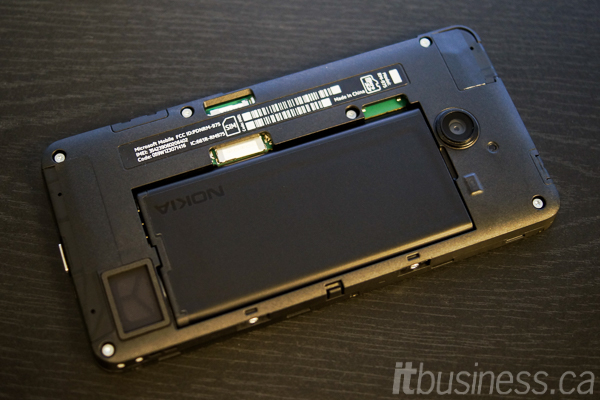 On the software side, the Lumia 635 runs Windows Phone 8.1, which is a significant upgrade to Windows Phone 8. While the basic concept of a home screen with active Live Tiles that display important information has not changed, 8.1 adds a number of features that bring it in line with the latest versions of Android and iOS. There are now additional tile sizes to improve the home screen layout, and a pull-down ‘action centre’ that displays important notifications.

Being a Microsoft phone, for business productivity the Lumia 635 is focused on Microsoft’s suite of solutions for email and document creation. If your organization runs on Microsoft (like most Canadian business do), then a device running Windows Phone 8.1 is a great choice. But if your work uses Google Apps, then Windows Phone probably isn’t the right mobile OS for you.

At $200 outright from Fido, Koodo, Rogers, and Telus it is very well-priced. It is good that you can also buy it unlocked directly from Microsoft. 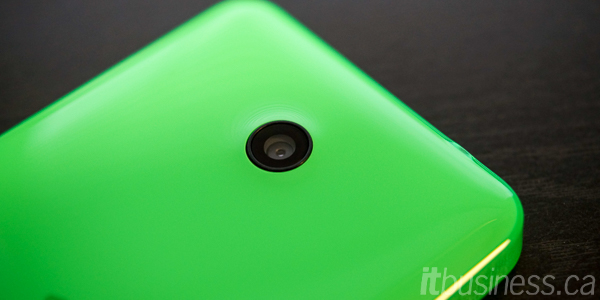 Many of the issues we have with the Lumia 635 can be put down to the fact that it is such an inexpensive device. You simply can’t expect its hardware to be comparable to devices that cost two or three times as much.

Still, its 5 MP camera is not very good at all, which while unsurprising, is made worse by the fact that Nokia didn’t even see fit to include a flash. Surely it wouldn’t have added much to the price of the phone. There is also strangely no front-facing camera, something most other budget phones still manage to include.

While the third-party application situation has improved markedly over the past year, Windows Phone still lags behind Android and iOS significantly, both in selection and app quality.

Lastly, the Lumia 635 has not yet received the already released ‘Update 1’ for Windows Phone 8.1. This update adds a few more useful software features such as the localized for Canada version of Microsoft’s Cortana voice assistant. 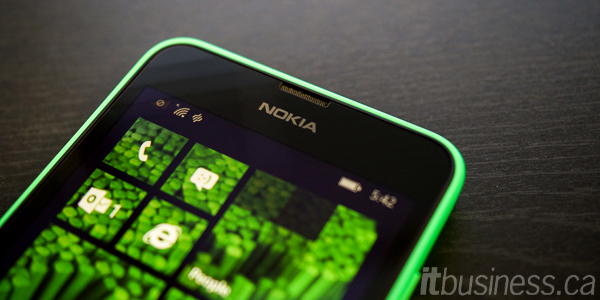 The Nokia Lumia 635 is a great smartphone for business users on a tight budget. Despite its price, it still well made and reasonably powerful. Of course, there are corners that had to be cut to get its price down (namely the camera), but the screen is still decent and the battery life good.

Windows Phone 8.1 is a good mobile OS that for most business productivity tasks is as good as competing OSes. While the Lumia 635 isn’t one of our Top 10 smartphones for business, it deserves an honourable mention.