However, at the Ideas for Life event organized by the electronics firm in Toronto last week I did get to briefly check out the soon-to-be-released high-definition camcorder, and hear Panasonic execs talk about its features.

They explained some of the new technologies in this camcorder — and how these dramatically enhance video and audio quality.

The HDC-TM700 will be available in Canadian stores April 1. Its retail price of $1,099 would put it within the range of many consumers, but judging by its features it would be a good buy for professional videographers as well.

“As an iA-enabled unit, it will detect your shooting situation and optimize the settings,” said Shawn Cleyford, product manager for camcorders at Panasonic Canada Inc. “A user can be confident that whatever they shoot through the lens will come out clean, crisp and clear.” 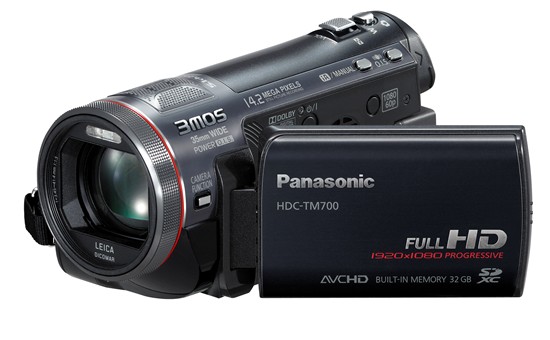 The HDC-TM700 is a three-chip or 3-MOS camcorder. Essentially, this means it uses three sensors instead of one. The system provides an effective separates the light received through the lens into the three primary colours – red, green and blue – each processed by its own image sensor.

What is new this year is the introduction of pixel mix video processing technology into Panasonic’s 3MOS camcorder lineup.

According to Cleyford, this feature has doubled the HDC-TM700’s sensitivity over last year’s TM300. The improvement, he said, is very recognizable.

One of the most enthusiastically promoted features of the TM700 is its ability to do what Panasonic execs call “true 1080p recording.”

Cleyford explained the concept at the Ideas for Life event.

A traditional HD camcorder, he said, records 1080 lines using an interlaced technique. “This could result in motion tearing, uneven or jagged lines in your images if you’re trying to capture high-speed video,” he said.

The HDC-TM700 has 32 GB of internal memory as well as an SD Card slot compatible with the new SDXE format. “We’ve added a manual ring and the viewfinder that was very popular in last 300 series.”

The big brother to HDC-TM700 is the HDC-HS700. The core features in both are the same but the HS700 includes a 240GB hard disk drive, while still maintaining the SD card slot.

Panasonic has also incorporated some new technologies in the memory cards it’s bringing to market this year.

She said over the next few years, the capacity of these cards would go all the way up to 2 terabytes.

The cards, Clark said, function in extreme temperatures – from minus 25 degrees C all the way to 85 degrees C. They are also physically durable, she noted. “We took the SD Association’s minimum strength benchmark and doubled it. Our cards are twice stronger than what they need to be.”

She said all the new cards have a new controller that supports minimum sustained transfer speeds of 10MB/sec. “With that speed you can optimize all the functions of whichever camera you pick up – whether it’s hi-def recording or reverse mode.”

A new refresh function within the same controller cleans up Flash memory errors that occur with usage. “Every time you use the card, the controller will automatically refresh the data and keep the card clean.”

Another new function dubbed ‘Power Fail Resistance’ has also been added to the cards.

“But when cards sense a power failure, they back up the data you’re recording on to a safe area within the card. In addition, they correct anything that got damaged.”

Joaquim P. Menezes
Previous article
How to do business in the Cloud with your feet on the ground
Next article
Microsoft stands by Windows 7 security claims after Pwn2Own hack

Why does soccer hate video replay? – Tech in Sports Ep. 28