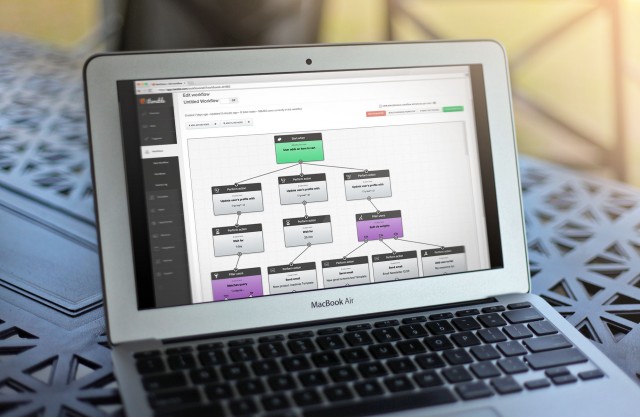 While Iterable’s existing platform was capable of A/B testing for e-mail campaigns, comparing response rates of different messaging, Workflows allows marketers to test the messaging of different series of messages in a “drip” campaign. Drip campaigns are launched by a trigger event–newsletter signup, shopping cart update, purchase, or other event.

Using Workflows, marketers can drag-and-drop design of drip campaigns, customizing time delays and filtering recipients by criteria as they move through the campaign. Workflows can also prevent recipients from being subscribed to multiple campaigns and control the number of e-mail messages received to keep campaigns from flooding customer inboxes.

” If you’re a non-technical marketer, Iterable allows you to run marketing experiments, split tests, customized batch emails, and list segmentation without bothering your developers. If you’re a developer, the API is sophisticated enough to build complex algorithms to maximize the efficiency of your lists,” Matthews said.

Iterable says its campaign platform is easier to use than those of competitors ExactTarget and Oracle Corp.’s Responsys, requiring no SQL programming. The company also says Workflows is more versatile than Sailthru, which can’t create multi-step drip campaigns based on events like shopping cart abandonment. Workflow campaigns can also be edited on the fly, a capability the company says no other e-mail campaign platform can boast.

Food and Beverage industry should take a note from Amazon, report insists