The day after I stayed up until 3:30 AM to watch Donald Trump become the U.S. president-elect seemed like a perfect time to escape into virtual reality with Google’s Daydream View.

Available today for $90, the fabric headset designed to work seamlessly with Google’s Pixel smartphone is meant to be paired with the Daydream app, also now available in Google Play. You could think of this headset as a luxury version of Google Cardboard, or a direct competitor with Samsung’s Gear VR. The concept is exactly the same – you slide your smartphone into a slot and view it through two lenses that are placed directly in front of your eyes. 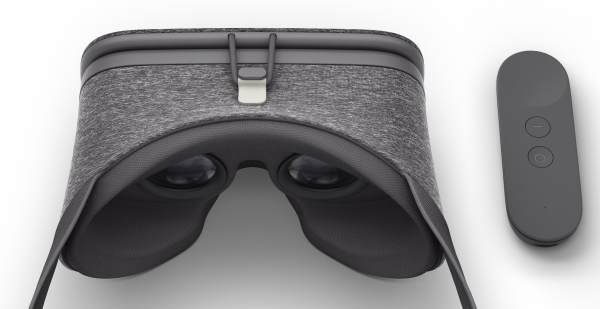 The headset is so dead simple to use that it could make VR great again (or for the first time). An elastic band holds the front panel tightly against the headset’s body and is easy to open up. When you place the Pixel on the plastic panel, the phone automatically detects the headset and will open the Daydream app. There’s even a convenient groove and another elastic band to store the remote control.

When using the Daydream headset for the first time, the welcome tutorial walks you through how to use the remote. About the size and shape of a shoe polish pad, the remote has three buttons. There’s a clickable and touch-sensitive circle at the top, and two equally-sized circular buttons below that.

You quickly learn the top button serves as the “app button” and the bottom serves as the home button. The home button serves an important role in calibrating your device for its pointing capabilities, often represented by a laser beam shooting into your virtual field of view. If you look at the controller while wearing View, you’ll see it represented in a skeletal outline. You’ll even see where your thumb is resting on the touch pad as you hold it.

Just having a controller to work with is a great upgrade for a smartphone-based VR experience. It feels more like using the HTC Vive headset, as you’re not bound to using a head-tracking user interface system that is often slow and clunky. Instead, you point and click with this sort of digital wand. Though the controller isn’t perfect. I had a bit of trouble defining the app button from the home button at times (the home button is more indented). Also, I’d sometimes click the track-sensitive circle area by accident.

If you have small hands, you’ll feel comfortable using this remote.

Another big win of this headset’s usability is its soft body. A nice foam padding around your eye sockets makes this far more comfortable to wear than other plastic or cardboard headsets. After a couple of hours of desperately trying to escape the new dystopian reality the world has been borne into, I almost forgot I was wearing the headset and was able to concentrate on the content on screen. It looks to me that Google has solved at least part of the problem of users only wanting to use VR for short stints.

Maybe I could wear it for four years straight. 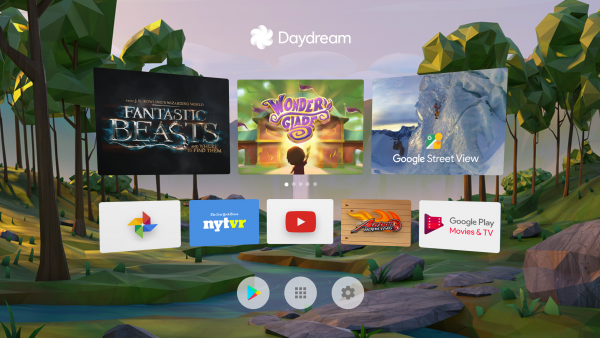 My blissful time away from a Trump-influenced world included playing a 3D puzzle game, navigating a magic-wielding hero through a ghoul-filled world seen from an angled bird’s-eye perspective, playing a variety of table-top style games in a colourful world designed for children, and more.

While Trump was likely appointing a climate-change denier to oversee the transition at the Environmental Protection Agency, I delved into a Youtube 360 videos where I saw extinct “sea dragons” live again, Darth Vader interrogate a Jedi, and strolled the grounds of the Taj Mahal via Google Streetview.

With the Pixel, the VR world looks bright and crisp. The View unit holds the phone in place very well and I didn’t have any problems with video looking out of focus. My one complaint about the headset is that the nose bridge is a bit too large, allowing offending light beams from the outside world of horrible actual reality into my sphere of solitude.

I tested a couple of other VR apps I found in the Google Play store and they also worked adequately with the View headset. Of course, they didn’t support the controller, though the volume controls are still active. In any case, it looks like the best VR content is to be found within Daydream and that will serve as the VR hub on Pixel and perhaps one day other Android devices.

For now, only Google’s Pixel and Pixel XL are compatible with the Daydream View. But it’s easy to imagine after some time of exclusivity, Google will open up the Daydream app to other partner devices. (Or even more likely, keen Android users will find ways to sideload it onto their devices.)

I say, the more people that can access this gateway to another reality, the better.