First look at Google’s new Samsung- and iPhone-killer, the Pixel

Samsung Electronics Ltd. is about to lose a big chunk of the North American smartphone market.

It’s difficult to reach any other conclusion after spending a few minutes with the Pixel, the new Android-powered smartphone developed in-house by Google Inc., which announced its entry into several key hardware markets in a big way today.

For starters, the device doesn’t carry the explosive stigma now associated with Samsung’s most recent device, the Galaxy Note 7; and I can personally testify that its accompanying VR headset, the Daydream View, is a lot more comfortable to wear than Gear VR.

And though visually the phone’s design screams “generic Android smartphone” – except, of course, for the stylized “G” at the back – it has a few tricks that set it apart. 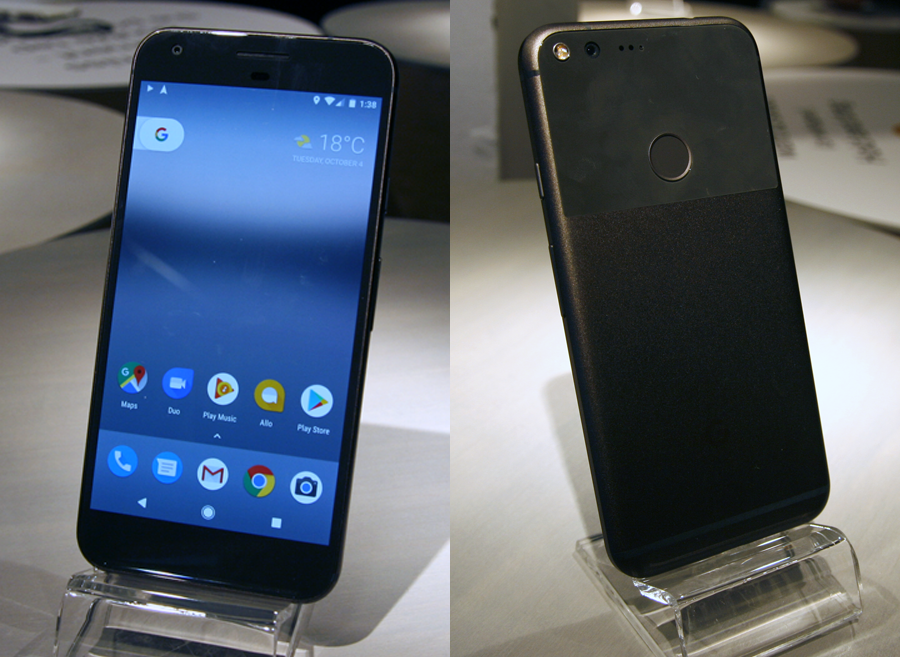 For example, much like the instinctive feel that rival Apple Inc. cultivates in its mobile products, many of the Pixel’s most common features can be accessed using intuitive gestures, such as tapping the power button twice to activate the rear camera, or giving the device a quick shake to activate the front camera if you’re shooting a selfie. Google has also added shortcuts to certain applications: holding down your finger on Google Maps, for instance, produces a prompt asking users if they will be leaving from work or home.

Other apps are easily voice-activated – the Pixel is designed for Google’s much-touted new mobile assistant, and if it works it’s not hard to imagine users watching videos on YouTube by saying which clip they’d like to see, or listening to music by telling the device which setlist to play.

Unfortunately, Google’s voice recognition software is far from perfect – it’s supposed to adapt to your voice, but when Takhar tried adding a “coffee stop” to his hypothetical journey Maps inserted a detour that led to a Los Angeles restaurant, and specifying “Tim Hortons” simply brought up the chain’s breakfast menu – but then, it’s not like Siri is perfect either.

In fact, Apple might want to keep an eye on Google’s new hardware push in general. While the Cupertino, Calif. icon has a few advantages that Google could never hope to match – a reputation for tighter security, for one, and an exceptionally loyal customer base, for two – the Pixel matches, and arguably surpasses, the iPhone 7’s two most notable features: an exceptionally high-quality camera and missing headphone jack.

At the very least, pictures taken with the Pixel appear to be an improvement over those shot with the single-lens iPhone 7, while the 3.5 mm headphone jack is the only feature that’s “satisfyingly not new,” per Google’s cheeky reference in the Pixel’s first promotional video.

One other potentially useful feature could be the worldwide, 24/7 customer support that Google has promised for Pixel users. Anytime they need help, day or night, a special chat feature is available that will connect users to a Google expert via text, phone, or video, complete with screen-sharing so that if they can’t describe their problem or follow the expert’s solution, the expert can solve it for them.

The Pixel’s U.S. release has been scheduled for November, and while no Canadian release date has been set, Google staff told us it will be out in Canada before the end of the year. Expect a proper review as soon as ITBusiness.ca can get its hands on one.

Eric Emin Wood
Former editor of ITBusiness.ca turned consultant with public relations firm Porter Novelli. When not writing for the tech industry enjoys photography, movies, travelling, the Oxford comma, and will talk your ear off about animation if you give him an opening.
Previous article
Sage deepens Salesforce integration with new cloud tie-ins
Next article
When Salesforce Einstein asks for your data, will you say yes?