When Salesforce Einstein asks for your data, will you say yes? 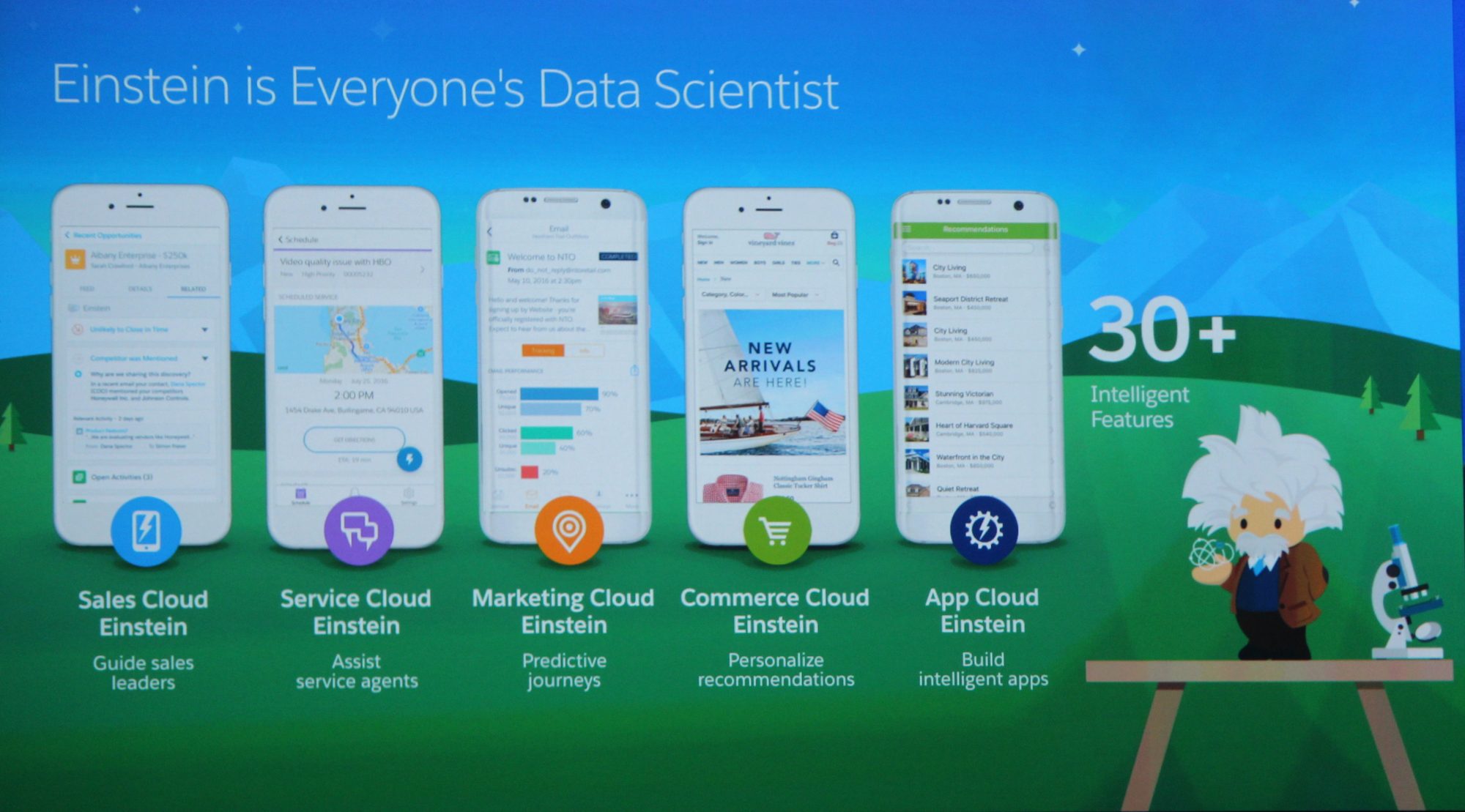 SAN FRANCISCO — Salesforce administrators are going to have a new choice to make when the winter update is pushed out a couple of weeks from now – will they opt-in to sharing their data with AI engine Einstein, or not?

Salesforce.com Inc. announced its new AI capabilities a couple of weeks ago – just ahead of competitor Oracle Corp.’s own conference and announcement of its smart applications, G2 Crowd’s chief research officer Michael Fauscette points out – and has been busy showing off its capabilities at Dreamforce. Einstein promises to take all the data that organizations have dutifully been capturing to their CRM for years and put it to good use, at first making recommendations about what leads sales reps should call first, or what personalization path is most appropriate for a marketing campaign.

To do all that it needs data. Einstein acts like a data scientist, building models to predict various outcomes for an organization based on the data it has to work with. Given that Salesforce has a huge customer base, Einstein has a lot of data to work with – but only if your company opts in to sharing your data as well. As explained by John Ball, general manager of Einstein, there’s a give and take involved.

“The opt-in is for a generalized model – this means that you learn from the other customers on the platform and then you get a customized model on top of that,” he says. “If you opt out of that, you work only from your own specific data.”

In other words, if you don’t opt-in to Einstein’s data sharing, your company will be stuck with an Einstein that only has your specific data set to work with. In opting in, Salesforce repeatedly makes clear that it values customer privacy and no actual humans will be looking at the data.

Further, the data being analyzed to build models for Einstein’s capabilities is anonymized – it can’t be traced back to its source. Jim Sinai, vice-president of marketing at Salesforce, explains.

“The things you’d get from the global model don’t include anything around your competitor’s data, and you don’t know where it’s coming from,” he says. “It’s the same way that when you type something into Google, you’re benefitting from all the people that have searched it before you.”

The opt-in choice will be presented to existing Salesforce users via the administrative panel, Sinai says, so the admins will be making the decision for their organizations. For new Salesforce customers, the opt-in will be accomplished during the contract process.

While some Salesforce users may have privacy concerns, this sort of opt-in is commonplace enough that most won’t worry about it, says Fauscette. Other vendors are already doing something similar.

“Pretty quickly it will become a common, accepted thing,” he says. “Especially once you understand the data being collected isn’t individualized.”

To get even more granular about the opt-in question, customers should understand that just because they opt in to access the global data orb for Einstein’s insights, that doesn’t mean Einstein is using global data in every situation. Since the AI will be building customer models for each customer, Sinai explains, it will determine if a customer is better off pulling from the generalized model, or just using its own data to predict outcomes.

“Every customer will have tons of models built, but not exposed to them,” he says. “We’re doing it behind the scenes and choosing the one that’s better for the customer.”

In the U.S., the Einstein opt-in will be on by default, according to Sinai. In other regions, that may not always be the case. For Canada, Sinai wasn’t sure what the default setting would be.

Brian Jacksonhttp://www.itbusiness.ca
Editorial director of IT World Canada. Covering technology as it applies to business users. Multiple COPA award winner and now judge. Paddles a canoe as much as possible.
Previous articleFirst look at Google’s new Samsung- and iPhone-killer, the Pixel
Next articleInside Deloitte’s office of the future