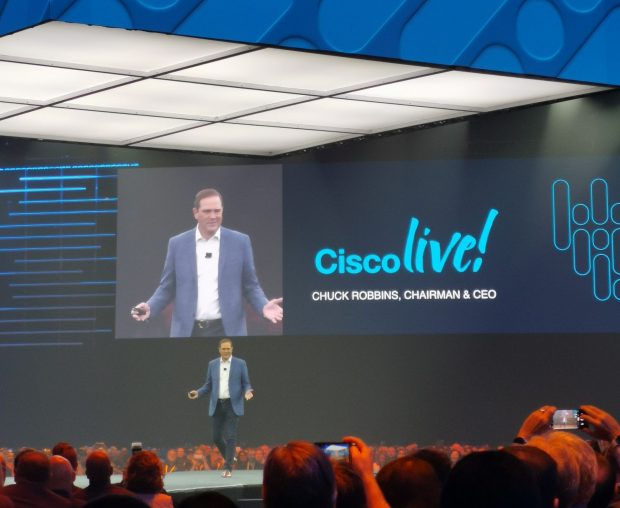 SAN DIEGO- Networking technology is in the midst of a serious shift as software becomes integral and hardware takes a back seat. The conversations so far at Cisco Live reflected this as only one of Cisco System Inc.’s four major announcements was related to hardware.

Announced today was a new line of access points, switches and routers designed to facilitate IoT in rugged environments, new AI and machine learning capabilities, new multi-domain integrations, and an expansion to include software skills for networking.

Chuck Robbins, the chief executive officer and chairman for Cisco, reflected this change in strategy and a need to listen to the needs of the customers to influence future innovation in his opening keynote.

“As we think about our strategy, everything that we do is influenced by our discussions with you,” said Robbins. “Everything that we do, we understand that you are building and delivering more applications to your organization than you ever have before. We understand that the application is the closest layer of your technology to the business issue or the business opportunity that you’re trying to drive.”

Connectivity no longer exists just between traditional devices like computers and cellular devices. IoT has opened up countless possibilities to bring non-traditional devices (like sensors and other monitoring devices) into the network allowing for deeper insights and quicker decision making.

“It’s not just your computer, or your tablet, or your iPhone, for that matter. When we talk about things, we also need to think about a robot in a factory. We need to think about an ATM machine that’s connected. We need to think about a kiosk that’s connected as well,” said Liz Centoni, the senior vice-president and general manager of Cisco’s IoT business group. “The network is no longer contained in the campus or in the branch in an office. The network is actually going to be extended out into these domains; right into a distribution centre, into a first responders vehicle, into a refinery floor. So the question is, is our customer’s network actually built for that? Because the architecture needs to extend across all of these new and emerging domains. And you need automation, you need security, you need analytics, to be able to realize the true value of IoT in a simple and in a cost-effective way as well.”

Centoni pointed out that of all of Cisco’s customers who innovated with IoT, only 40 per cent moved past the proof of concept stage.

Cisco is hoping that its newest line of access points, switches, and routers designed to facilitate IoT in rugged environments will help solve this problem.

The new products announced today include:

AI and machine learning for networking

To reduce the workload of IT professionals, Cisco is throwing its weight behind AI and machine learning.

This solution, which is available on a subscription model starting in August, is said to provide greater visibility with vital insights into the operations of your network and analyze any alerts and by referencing it to the usual activity will only provide alerts for serious threats, while also taking action on the tasks that do not require human intervention.

By personalizing the capabilities and giving it time to analyze usual activity on your network, it will develop a customized baseline to analyze exactly which alerts are deemed necessary for action and which insights are essential to your network.

“There’s a lot of complexity. And the reason this matters for a lot of the customers is that you have more and more things they have to deal with,” said Scott Harrell, the senior vice-president and general manager of Cisco’s enterprise networking business. “And that complexity can start to exceed the human’s ability to deal with this. And this is really where we need machines to come along and assist the humans.”

For Jordi Marin Manzanara, the lead network engineer for King.com Ltd., in the short time they have had access to the solution, he said they have seen their alerts go down by about 80 per cent, as the trivial ones are now either being dealt with by AI or ignored because they’re not significant.

Cisco announced solutions to help build the architecture that can span every domain of an intent-based network; including campus, branch, WAN, IoT, data centre, and cloud.

“What you’re trying to accomplish in each of those areas are very different. Most IT organizations, they’re running a combination of all of this,” explained Harrell. “How do I actually take care of them and give them the best and optimal outcome as well as secure their environment? So we have to come along side them and help them do that in meaningful ways.”

Through multi-domain integrations, Cisco said it will give its customers a secure and reliable experience no matter their method of connection, while meeting all of the unique needs of each of the previously mentioned networking domains.

The integrations will create new end-to-end capabilities including:

-Network segmentation. By integrating Cisco SD-Access with Cisco SD-WAN and Cisco Application Centric Infrastructure, Cisco said it will make it easier for IT teams to perform such actions on a consistent basis like authorizing, onboard, and segmenting users and devices across all of the domains.

-Application Experience. To facilitate IT teams to raise application performance across an entire company, Cisco said it will not automatically convey application requirements between the data centre and the WAN. This will allow the network to choose the most optimal path and prioritize traffic even when applications are moved or altered.

-Pervasive security. Cisco said it will be extending the ability to detect threats in encrypted traffics across public clouds. As well, it will protect all domains against threats; providing end-to-end security.

Cisco already provides an extremely vast range of certifications. And now it is trying to bring those certifications up to date to its new software-centric strategy.

And so today Cisco announced that it would be updating its certifications to include software skills and DevNet skills.

Susie Wee, the senior vice-president and chief technology officer for Cisco DevNet, said it’s all about “how we can unleash those full capabilities of this new network and bring it to practice.”

*Buckley Smith’s travel and accommodations to cover Cisco Live were paid for by Cisco. This article was not reviewed externally before publication.