The recommendation of a government-funded study that Canadian deals websites form an industry body to create a common set of standards for issues such as refunds and expiry dates isn’t necessary, according to the founder of the Canadian Deals & Coupons Association.

Albert Bitton founded what used to be the Group Buying Association of Canada in 2010. Back then, when Groupon had just created a new industry where a certain number of buyers had to agree to buy an offer from a merchant – typically to get between 50-90 per cent off the normal price – before it was unlocked for everyone to use. The market was quickly flooded by a group of fast-follower businesses that quickly adopted the low-barrier-to-entry business model. Today, that market is quickly consolidating as sites either die off or get acquired into larger sites or by media companies. And the “group buying” aspect needed to unlock a deal is no longer a condition – everyone who buys a deal is automatically entitled to it.

Some of the top players in the industry include Groupon, the newly merged DealFind and TeamBuy, WagJag, Tuango, LivingSocial, DealTicker, and Buytopia. The industry is large enough and has enough players that its worthy of further organization, according to the Public Interest Advocacy Centre (PIAC). The players should collaborate to create an industry body to address common issues, charging entry bonds for each new member. The body would help address ambiguity around what laws govern deals sites.

“It was unclear if any laws or regulations specifically applied to the deal site offers in Canada. Contract law was considered, but ultimately dismissed since the terms and conditions under deal site contracts leave no room for negotiation on the part of the consumer,” writes report author Jonathan Bishop of PIAC. “It is possible that certain provincial consumer protection laws prohibiting ‘unfair practices’ could be applicable to Canadian deal sites. However, there has yet to be a judicial decision on case brought forward against a Canadian deal site, making it unclear how provincial consumer legislation would apply.”

Gift card laws were also looked at as possible protection of consumers of deals sites, but those regulations vary across the country, meaning consumers in some provinces may be protected while others aren’t.

But creating a new industry body isn’t necessary according to Bitton, who was interviewed as part of PIAC’s study.

“I guess we are that body,” he says. “I disagree there needs to be a separate body for following rules and regulations because the entire industry follows under the consumer protection act.”

Existing consumer protection laws and industry competition is enough to ensure Canadians receive good customer service from deals sites, Bitton says. He points to laws like the Ontario Consumer Protection Act as legislation binding deals sites. He also points to Wagjag’s recently receiving an A- grade from the Better Business Bureau as evidence the industry is working hard to gain consumer confidence. Customer service has become a focus for deals sites lately, he says.

“They have no choice, consumers have too many options to go and buy their deals elsewhere,” he says. “If TeamBuy doesn’t provide top service, they’ll go to WagJag or Groupon or Buytopia…”

A couple of the main issues that deals sites must resolve with consumers, according to PIAC, are how refunds are issued and how the coupon is treated once the deal offer period expires. When it comes to refunds, each site approaches them with a different policy. Typically, they either issue a refund within seven to 14 days after purchase, or take a case-by-case approach. 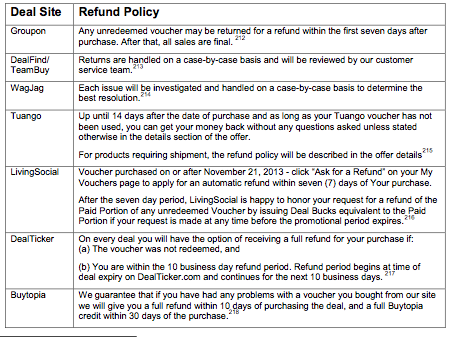 “Canadian consumers continue to expect a comprehensive refund policy, want clearly understood terms and conditions for each offer, and want a complaint resolution process to assist them if they encounter redemption issues,” Bishop writes.

Many consumers also expect to be able to redeem their face value after expiry, yet that is not necessarily the case across the country, PIAC says. Typically a deals voucher will have a promotional value (for example, a $50 meal that a consumer pays $25 for) and an expiry date. After the expiry, consumers expect to at least get the amount they paid for the voucher honoured by the merchant. PIAC is recommending the promotional value remain valid for at least one year after the date of purchase.

“That’s not realistic considering that retailers have to schedule their promotions on seasonality,” Bitton says. “Deal marketing is to attract customers for a specific time, not an ongoing promotion.”

Merchants often want to move stock based around a promotion quickly, or organize a specific event around a deal offer, he adds. As it stands, merchants typically offer about nine months to consumers to redeem the deal value on their vouchers.

Other recommendations for the deals industry from PIAC include:

Brian Jacksonhttp://www.itbusiness.ca
Editorial director of IT World Canada. Covering technology as it applies to business users. Multiple COPA award winner and now judge. Paddles a canoe as much as possible.
Previous articleFacebook updates user privacy controls
Next articleA look ahead: The HTC One M8 launches in Canada Apr. 15

Consumers will share data, but for a price: Aimia