Facebook is rolling out some changes to its privacy controls aimed at simplifying how its users share information with the audiences they want and educating those users on what’s happening with their information on the social network.

A web conference held for media in Toronto, the U.S., the UK and Germany with two Facebook engineers in Silicon Valley looked at several updates to privacy controls that mostly focus on the design of how user privacy is managed, not changes in Facebook’s privacy policy itself. The most apparent changes will be seen around the way users publish content to their Facebook profiles.

For users that have not changed their “audience selector” setting from publishing to a “public” audience – meaning anyone on the web could see their content – a friendly reminder or “Privacy Checkup” will periodically pop up to make sure that’s really what they want. It features a cartoon dinosaur character using a laptop.

Facebook doesn’t want to make a habit of interrupting its users with cartoon characters, said Michael Nowak, a product manager at Facebook. It tested the notification and found that 80 per cent of users found it helpful, so decided to roll it out across the site.

“We’ve all learned the lessons from the Microsoft paperclip,” Nowak said. “If something annoys you when you’re trying to get something done, people just tune it out over time.”

The audience selector tool, which determines what Facebook users can see your posts, is also getting a redesign aimed at making it more simple. When viewing the desktop version of Facebook, a user will see two main options; Public and Friends, then a third More Options tab that will let them drill down to more custom audiences.

The mobile app will see the audience selector move from the bottom right-hand corner to the top of the post composer.

“There’s certain attributes of interfaces that make things easier or harder to do,” Nowak says. “We try to get the core fundamentals as consistent as possible, but tailored to the experience you want to have.” 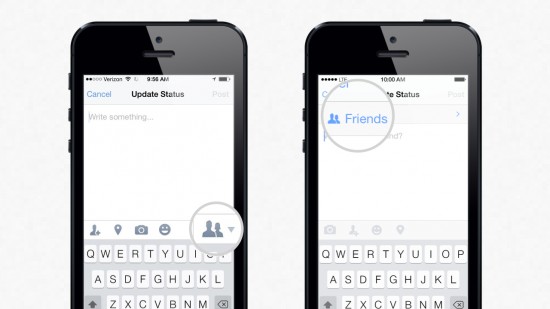 Other changes include adding privacy options for past Cover Photos so they will not all be publicly available. Users will also see some more explanation around the “reshare” feature informing them that resharing a user’s post doesn’t extend the audience beyond what the original poster intended.

The lunchtime chat session with media also gave some insights into how privacy is managed at the popular social networking site. Facebook has developed its privacy product development roadmap based on user feedback. To that end it runs 4,000 user surveys per day just on the topic of privacy, conducted in 27 different languages and carried out across different devices and platforms. It also collects feedback from the reporting tool that’s built into the drop-down menu in the corner of each page.

For Facebook, the issue around its user privacy controls is an engineering subject that is entirely separate from security. Privacy engineers don’t concern themselves with protecting account credential access and encrypting data, that is a separate security infrastructure. Each product feature engineer must be concerned with privacy at Facebook – so the developer building the photo sharing feature must concern themselves with issues around privacy of photos and work to write the code related to that.

Then there’s the privacy engineering team that works towards a total infrastructure and iterating privacy controls across Facebook for all users. This team is divided into two divisions – the product team that gives users the ability to control and understand what information they’re sharing and the infrastructure side that allows Facebook engineers to easily incorporate privacy into their features.

“Every time we show any information on Facebook, we do a privacy check to make sure the viewer can or can’t view that information,” she says.

Facebook must engineer for “edge cases” that would come up just one per cent of the time or less because of the site’s massive volume. With so many transactions happening per day, even a one per cent chance of something happening would mean it could arise thousands of times per day.