Groupon recently announced the sale of its one billionth promotion – an $11 for $20 coupon from Peters, Missouri-based Italian restaurant Pirrone’s Pizzeria, which received $10,000 USD for the honour.

(The purchaser, naturally enough, is receiving $100 gift certificates she can spend at local Groupon-friendly businesses every week for a year.)

The Chicago-based group buying pioneer, which at its height was worth over $12 billion USD, has come a long way since its humble beginnings as one cause of many championed by the Point, a website that Pittsburgh native Andrew Mason started in 2007 to harness the power of collective bargaining.

Join us as we look back at the many troughs and triumphs that led Groupon to its latest milestone.

Groupon is officially launched after one of the Point’s user groups, which encourages members to buy the same product in order to receive a discount, gains significant enough traction for venture capitalist, Point investor, and Groupon cofounder Eric Lefkofsky to suggest switching the site’s focus from social causes to group buying – an idea that Mason himself mentioned in the Point’s initial business plan, but is reluctant to accept until the “great recession” begins in September 2008.

Groupon enters its first market outside of Chicago – Boston.

Groupon reaches two significant milestones – after only 16 months in business, its workforce has grown from a few dozen employees to more than 350, and its worth is estimated at more than $1 billion USD – which, at the time, makes it the second-fastest website to reach that mark (the fastest was YouTube, which was worth $1 billion after only 12 months).

Groupon acquires CityDeal, a German website founded by Marc, Oliver and Alexander Samwer, three brothers who have made a lucrative career out of building European Internet companies that resemble American Internet companies, then selling them to their overseas counterparts. In addition to CityDeal, two of the brothers’ most famous creations are Alando.de, which sold to eBay for $50 million, and StudiVZ, which sold for $100 million.

According to some sources who spoke to Business Insider, the Samwers turned Groupon’s frat house-like corporate culture upside down – but the acquisition of their company also doubled Groupon’s global reach.

According to Business Insider, Mason rejected Yahoo’s offer simply because he did not want to join the company or work for its CEO, telling Groupon’s board of directors the company was only getting started.

However, Google’s offer was rejected because of anti-trust laws, according to the same article, with analysts concluding the takeover would never have been approved.

Yet another workforce milestone – more than 10,000 employees, leading some investors to call Groupon the fastest growing company in history.

After three years in business, Groupon finally makes its initial public offering, pricing shares at $20 USD each for a market value of around $12.7 billion USD – the largest IPO by an Internet company since Google in 2004. The company’s shares briefly soared to $31 soon after, but have trended steadily downward since and currently trade at around $4 USD.

Cofounder Mason is very publicly fired as Groupon’s CEO and temporarily replaced by vice chairman of the board Ted Leonsis and co-founder Lefkofsky, who is later appointed to the position permanently.

Mason’s dismissal is far from a surprise – a reluctant capitalist with a musical background, he not only cultivated an unconventional public persona – for years, his photo on Twitter was a picture of himself in his underwear, unwrapping a Nintendo Wii – but was roundly criticized for a controversial accounting metric in which the money Groupon spent on advertising was registered as a one-time capital expense, rather than a quarterly, recurring expense. (The company discontinued the practice in August 2011.)

“From controversial metrics in our S1 to our material weakness to two quarters of missing our own expectations and a stock price that’s hovering around one quarter of our listing price, the events of the last year and a half speak for themselves,” Mason wrote in his farewell e-mail (which he posted online, figuring it would “leak anyway”). “As CEO, I am accountable.”

Groupon’s website is completely redesigned (below) for the first time in its five-year history, from a “deal of the day” format that was the company’s initial practice to a feature-rich design that could accommodate the wide range of services available today. 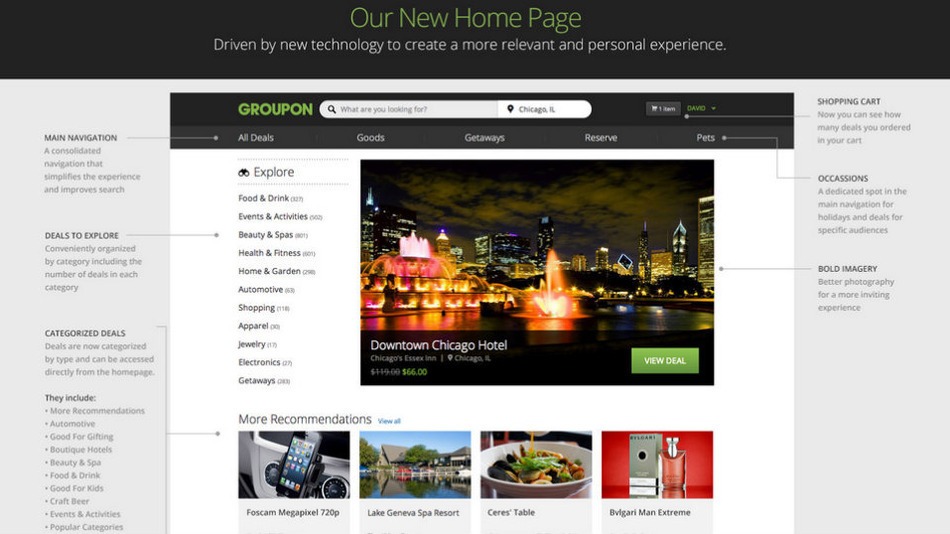 Rich Williams, who had served as Groupon’s Chief Operating Officer since June, replaces Lefkosky as CEO of the company, a position he holds to this day.

Groupon announces the elimination of approximately 1100 positions – at a cost of $35 million USD – primarily in its sales and customer service divisions, along with the closing of operations in seven international markets: Morocco, Panama, Philippines, Puerto Rico, Taiwan, Thailand and Uruguay.

Chinese e-commerce giant Alibaba quietly purchases 5.6 per cent of Groupon’s shares, a fact the company itself learns only after a regulatory filing. Speculation that Alibaba might be considering a takeover bid has pushed the company’s stock upward in recent weeks.

Groupon sells its one billionth promotion. Check out the company’s celebratory infographic below (click for a larger version): 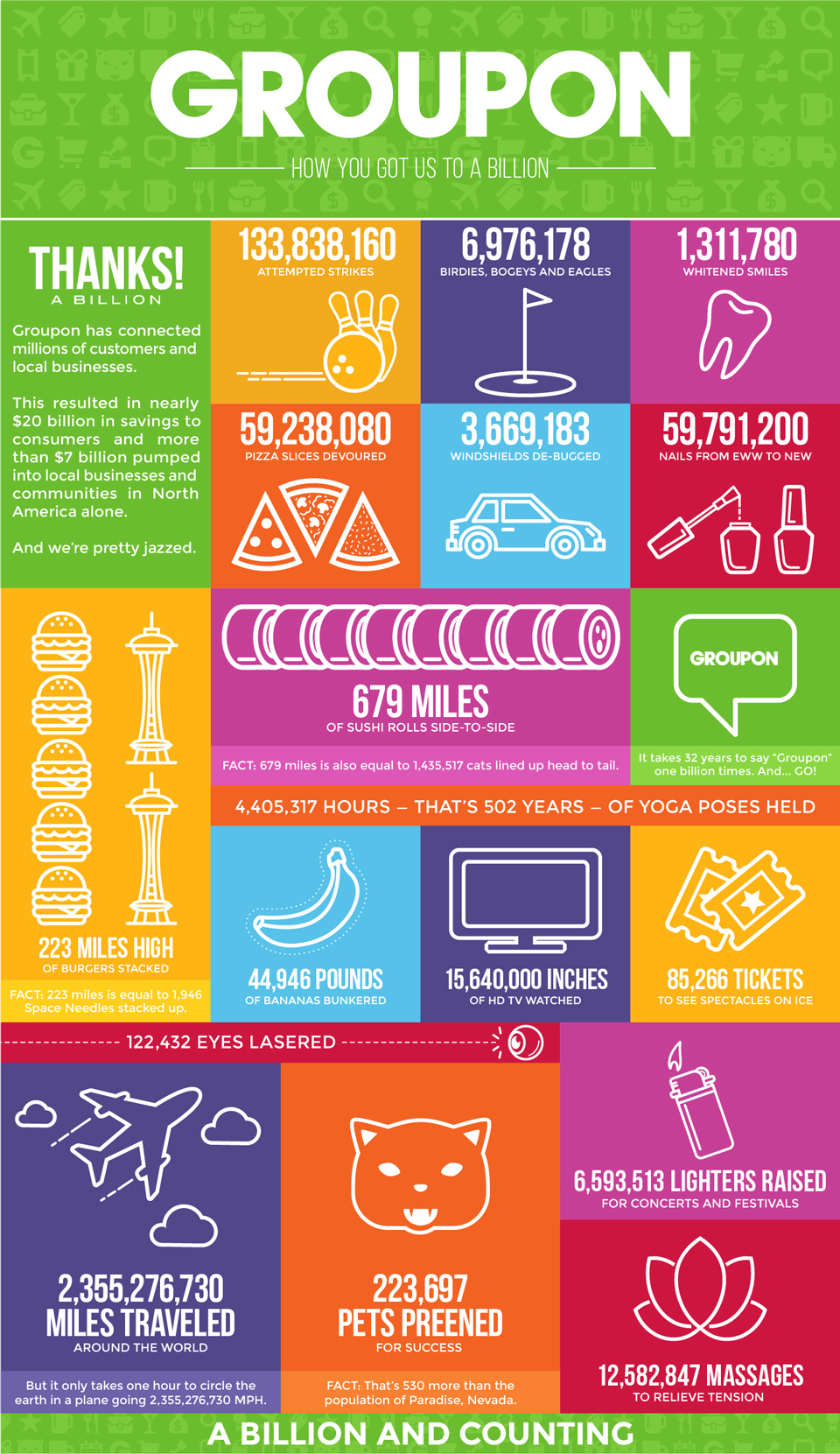 Eric Emin Wood
Former editor of ITBusiness.ca turned consultant with public relations firm Porter Novelli. When not writing for the tech industry enjoys photography, movies, travelling, the Oxford comma, and will talk your ear off about animation if you give him an opening.
Previous articleOpenTable still providing five-star service after 18 years in a changing market
Next articleToronto-based ScribbleLive launches interactive content marketing tool