Waterloo, Ont.-based Thalmic Labs released its arm band that allows users to interact with computers with a wave or a flick of the wrist for sale on Amazon.com on Monday.

Previously only available as part of a developer’s kit, the Myo armband is moving into its consumer phase alongside a slew of product announcements being made in the mobile device industry at Mobile World Congress. Based on a provided statement by Thalmic Labs CEO Stephen Lake, it sounds like the firm still expects the Myo to be picked up by only the early adopter crowd.

“In addition to the increased exposure through Amazon.com, we look forward to getting our product in the hands of people who are interested in transforming the way we interact with technology,” he says in a press release. 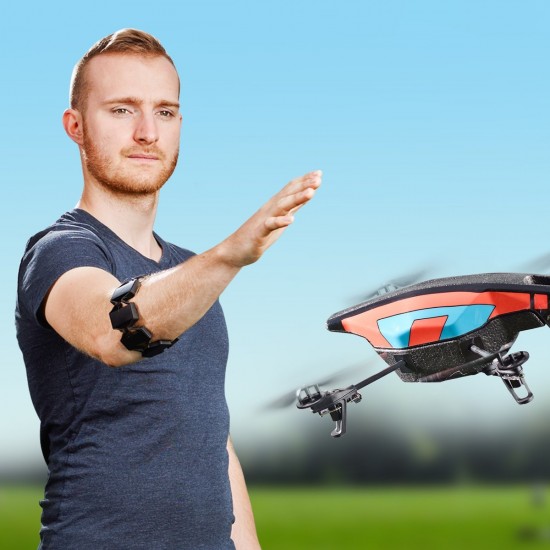 The armband works by detecting the electrical impulses sent to your muscles when you move your arm. It then translates the gestures you’re making with your fingers, hand, or arm into commands to a computer. Thalmic Labs has showcased its technology by using it to fly consumer drones, or for more pedestrian computing tasks such as advancing a PowerPoint presentation.

Priced at US$199 on Amazon, the black version of the arm band was showing as sold out on Monday but the white model was available to ship the next day. It’s recommended for ages 12 and up.

Related
Wearables in the workplace on display at Dreamforce

The Myo currently supports five different distinct gestures. Users can use the applications found in Myo Market Beta to control their computers, or they can map the gestures to custom keyboard commands.

While the Myo is newly available for consumers, it has been used in the B2B marketplace for months. For example, APX Labs integrates the Myo with smart glasses (either Google Glass or Epson Moverio) to create a solution for field workers that use the wearable tech to stay connected while they’re on the job, and still have their hands free. Now that Myo is available on Amazon, it’s possible that you might notice some of your colleagues are also hands free during their next slide presentation, as this wearable gets pulled into the BYOD trend.