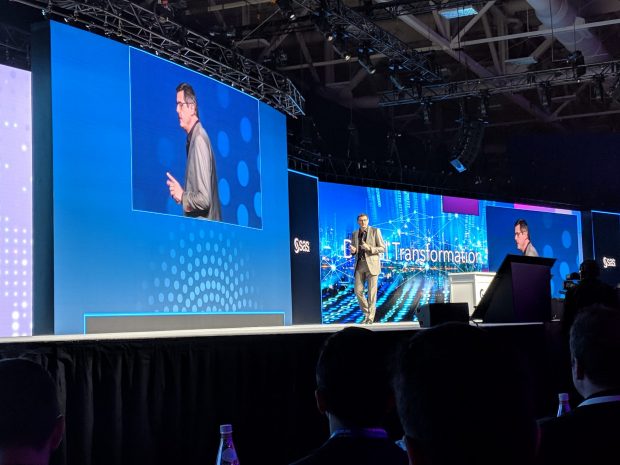 DALLAS – In a world teeming with data, being able to harness that data will be essential to making monumental advancements across myriad fields.

This is the idea that Jim Goodnight, founder and CEO of SAS Institute, put forth during the opening session of SAS Global Forum in Dallas, Tex. on Sunday night.

“Making sense of all of that information is critical to solving some of the biggest challenges,” said Goodnight. “We can start with an idea, like building a smarter city and expand that into a global effort to combat climate change. We can make better decisions that can lead to the replication of diseases, and better health. We can automate mundane tasks and help everyone be more creative and strategic.”

Comparing the data revolution to the Apollo program, which he helped build communications equipment for earlier in his career, Goodnight said it will require a team effort to make the breakthroughs that will change our world.

“We remember names like Neil Armstrong. But did you know that it took 400,000 scientists, technicians, mathematicians and engineers to turn that idea into a reality?” said Goodnight. “They had to create new mature technologies and mathematical models to reach the goal of landing on the moon. And in the past few years, I’ve seen some parallels between our world today… that we are witnessing a renewed focus on data analytics, driven by the combination of increased computing power, a more connected world, and more powerful technologies like artificial intelligence, computer vision, natural language processing, and machine learning.”

As we witness a steady stream of new and exciting technologies it can be easy to get caught up in the excitement of these technological advancements. But realizing the power for change these technologies possess is the true goal. And it is this goal that excites Oliver Schabenberger, executive vice president, chief operating officer, and chief technology officer for SAS.

“AI and digital transformation are real and powerful but let’s focus on the problems we are trying to solve,” said Schabenberger. “If a problem is driven by data we can solve it with some form of analytics.”

During the session, SAS brought out a variety of people who are using data and analytics to drive change across many industries, including using analytics to pinpoint the chemicals in our everyday life that are causing cancer at and analyzing data to better help families and children at the New Hanover County Department of Social Services.

Melissa Strong is the founder and CEO of Indiomics, a biotechnology firm that is using data and analytics to determine which everyday chemicals – as well as other demographic factors – are leading to the highest rates of cancer, to educate people about how to best decrease their chances of being diagnosed with cancer.

She first became interested in her field, epigenetics, at a young age when her brother was diagnosed with a congenital disease called hydrocephalus; which causes excess fluid to build up in the brain.

Her family later discovered that this was caused by water contamination from chemicals being used at a local dry cleaner, and then later when she became pregnant, she saw an opportunity to help others.

“When I became pregnant myself years later, I wanted to understand how I could afford to have a safe, healthy pregnancy,” said Strong. “And I realized that by expanding my research, I could help not just my own family, but also people and families across the globe.”

And while we have made great advancements in the awareness of the harm that being in contact with the many chemicals we have in our world today can have, she says that analytics and machine learning is the next step in truly helping us change our lifestyles to prevent diseases like cancer and other life-threatening ailments.

“Our big idea is to use data to provide clarity about our personal exposures. So we’re going to actually dive into the body. We want to know on a cellular level. What has gotten into my system? What are my cells interacting with as far as synthetic chemicals? And is that leading to a measurable molecular effect?” said Strong. “That’s really where my passion lies, is how do we apply data science to bring the healthiest children we can to the world, and get them through childhood as strong and as resilient as possible.”

Buckley Smith’s travel and accommodations to cover SAS Global Forum were paid for by SAS. This story was not reviewed externally before publication.

Buckley Smithhttps://www.itbusiness.ca
Staff writer for IT World Canada. Covering the world of technology as it applies to business. Buckley is an avid sports fan who loves travel, food, and music. Can be contacted at [email protected] or 416-290-2000.
Previous article
TD Bank chooses Microsoft Azure, says hyperscalers have ‘upped their game’
Next article
ITAC appoints experienced executive Angela Mondou as permanent president and CEO