The first feature that grabs your attention — even before you turn on the Samsung UN55B7100 flat panel display — is its incredibly slender form factor.

At its thickest point, the display measures just 1.2-inches and then tapers off to a razor-thin edge.  It’s the first thing visitors to my living room – where I tested the TV – commented on.

In terms of physical set up, you have a couple of options – either use an optional wall mount (WMN1000B) provided by Samsung or keep the TV on its stand.

The wall mount option lets this LED display be hung just like a picture frame — less than two inches from the wall. But whether you use that or the included stand the slim display undeniably adds to the décor of any room in which it is placed. 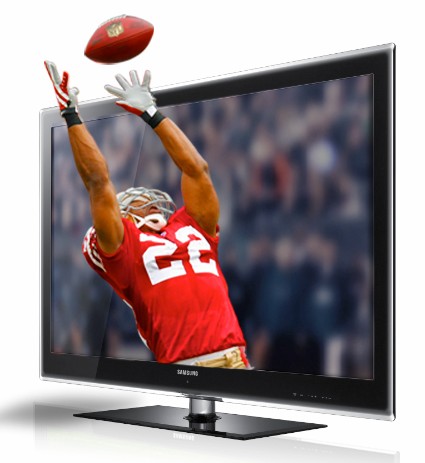 The outer edge of the panel is transparent with a gray tint – that’s more neutral than the red tint of the Samsung UNB7000 series that wasn’t to the taste of some users – but I personally liked.

The 55B7100 has other advantages, apart from its slimness.

It weighs very much less than many other Samsung models and uses far less power — according to Samsung, its Energy Star-Compliant LED TVs use 40 per cent less power than similar size 2008 Samsung LCD TVs in standard mode.

We’ve billed this LED display as a hybrid device that information workers can use for entertainment and work.

Picture quality is relevant to both functions, so let’s talk about that first before discussing the panoply of interactive features offered by the 55B7100.

Picture quality is stunning on the Samsung 55B7100 and can be fine-tuned to an amazing degree of precision.

While reviews of a similar display have pointed to “a few flaws” (such as uniformity issues in dark scenes) these weren’t apparent in my tests on the 55B7100.

I hooked up the display to a Samsung BD-P1500 Blu-ray player using the HDMI 1 port on the display.

One of the first Blu-ray disks I played was Master and Commander – The Far Side of the World – the 2003 movie portraying the electrifying battle between the crew of HMS Surprise – under the command of Captain Jack Aubrey (Russell Crowe) – and the French privateer Acheron. The movie won an Oscar for best cinematograhpy.

The battle sequence at the very start of the movie happens under an overcast sky and colours are muted but amazingly clear. 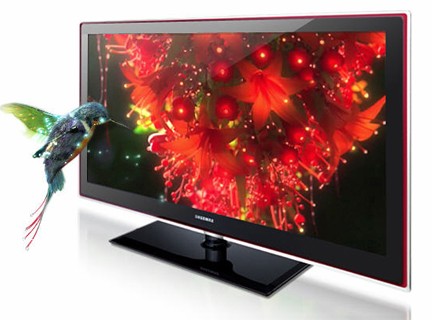 And during the pitched fight between HMS Surprise and Acheron, despite all the confusing action on the screen — billowing smoke from roaring canons, debris, bodies flying in all directions — colours and tones on the 55B7100 remained clear and differentiated.

This was especially so during the brief sequence, around 11 minutes into the movie, when the two battling men-of-war get astride each other. Every tonal nuance — the blackened masts of the two ships’ buffeted by firing, smudges of blue in the menacing sky, deep orange bursts of flame from roaring canons — was rendered beautifully.

The interplay of darkness and light was also exquisitely rendered in a later scene featuring the conversation between a young boy (who lost part of his arm during the battle) and his pal.

Every detail of the dying boy’s fevered, sweat-drenched face and chest and his buddy’s heart-broken expression were visible, and the incredible detail made the scene that much more poignant.

I played around with the set’s calibration for a long, long time, tweaking everything from the picture mode to the backlight, contrast, brightness, sharpness and more.

For movies I got the best results with the following settings: Mode: Movie; Backlight 6; Contrast: 92; Brightness level: 46: Sharpness: 18; Colour: 48.

Advanced Settings – Black Tone set to Dark; Dynamic Contrast: Off and and increasing the Gamma Control from 0 to +3.

In Picture Options setting the Colour Tone to Warm 2 and under Auto Motion Plus, selecting Custom and sliding the Judder Reduction all the way to 10.

In the scene where Crowe shares banquet with his crew and relates how he served under Lord Nelson — the flesh tones, the golden trim on the diners’ uniforms, the ornate silver serving dishes, the exquisite candelabra, even the colour and striations of two weevils discovered on the bread plate are all realistic – untinged with any unnatural tones.

These fall into two broad categories.

First, there are shared networking capabilities accessed through the DLNA (digital living network alliance) capability. DLNA-certified devices let you play multimedia content stored on your PC, on your TV – via your home network. 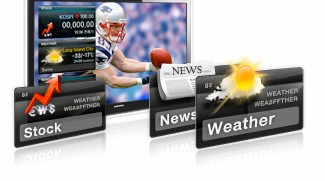 Access to YouTube videos was a breeze. I downloaded 10-minute videos in seconds without any stalling or freezing (though that possibly had more to do with my powerful Internet connection than the TV’s capabilities).

YouTube and Yahoo News will likely to be the most oft used of the Internet widgets.

You can also download other widgets that don’t come pre-installed.

For instance, I downloaded and added Twitter to the display.

I then posted a test Tweet, but it was laborious, long-winded process. Navigating from one letter to the next on the onscreen keyboard is worse than pulling teeth. Bottomline: the Samsung display isn’t the best platform for tweeting.

Then there’s a whack of other included content you can enjoy – everything from cooking recipes, to picture galleries, games, wellness tips etc. This content is pre-installed on the display so no downloads are required.

With the DLNA function, though, my experiences were mixed.

As mentioned this feature lets you play content from your PC – pictures, audio and videos – on your TV.

The Samsung manual says you first need to install the PC Share Manager 2.0 application on your PC using the provided CD.

Typically, if you’re want to play the content from your PC wirelessly – you also need to connect 2009 Samsung Wireless LAN Adapter to the USB port on your TV.

Instead, I used a SlingLink (from SlingMedia) to provide a hardwired connection from the TV to the Internet and my home network.

While I could play audio and view images from my laptop PC on the 55B7100 — with video it was a different story.

The display did play some .avi clips on my laptop that I had downloaded from The NewsMarket – a free online video resource for media.

However, I kept getting a “Not Supported File Format” error message when trying to play .avi videos uploaded from my Sony digital camcorder to my PC or videos I had created using Adobe Premiere Pro CS3 that were also in .avi format.

From an information worker’s perspective, the 55B7100’s performance as a PC monitor is arguably the pièce de résistance. I hooked up my HP Pavilion laptop to the VGA port on the display.

The Samsung device resolved every line of 1,728×2,304-pixel resolution pictures from my last year’s vacation with no overscan or edge enhancement.

For graphic artists and video editors – this display (if they could afford it) would make a fabulous addition to their studio.

When editing video with Adobe Premiere Pro CS3 or CS4 for instance – the ample real estate offered by this 55-inch display enables you to keep multiple video and effects’ panels open simultaneously.

This can be a huge time saver, as you no longer have to repeatedly open and shut panels when working on a project. It also enlarges your timeline panel enabling you to edit more quickly.

As for movies – whether you’re watching DVDs or flicks loaded on your hard drive – there isn’t any degradation of quality.

In terms of device connectivity, while the 55B7100’s has the usual ports one would expect in a high-end, high-priced TV, there are a few drawbacks.

Here are the main video ports the display comes equipped with:

Having a single port for Component In and AV In connections isn’t a good idea at all.

Apart from unnecessarily complicating things for the user, the desired result – when you use an AV connection – isn’t good.

I hooked up my Sony DVP-NS325 DVD player using the AV ports on the device and the audio was terrible. There was a persistent humming in the background and the picture quality wasn’t anything to write home about either.

I don’t see why Samsung couldn’t have included a dedicated AV jack, especially when the display doesn’t have an S-Video port — but has four HDMI jacks!

The main drawback is an imperfect DLNA feature – the “share video” feature doesn’t work as it should – and the absence of a dedicated AV port.

If Samsung rectified these in the next version it would be everything an upward mobile information worker could hope for from a hybrid display.

Of course, this LED display clearly isn’t for everybody. But information workers who can afford the steep price tag will find they get good value for money.