The Panasonic AG-3DA1 could have a dramatic impact on professional 3D video and film production in Canada, the company says, bringing them within the reach of small production shops, independent cinematographers, and consumers.

The device started shipping earlier this month at a price point of $22,000.

At a press briefing last week, Panasonic Canada also announced a 3D camcorder targeted at the consumer market — the HDC–SDT750. It’s slated to ship in October at a retail price of around $1,600.

Breaking down the cost barrier

“For 3D to be really effective, you need to accurately simulate the human visual system,” Terry Horbatuik, national sales manager, professional imaging group at Mississauga, Ont-based Panasonic Canada told ITBusiness.ca. “That takes very precise instruments, cameras and lenses. The cost of all these items together, when assembled into rigs, can be very steep.”

He said Panasonic has addressed this issue by integrating all these complex capabilities within a single unit, using its proprietary technologies.

The end result, he said, is a remarkably accurate device that eradicates many of the mechanical problems associated with rigs.

The AG-3DA1’s market significance has a lot to do with its price, the Panasonic Canada exec said. “Setting up rigs for professional 3D shoots can cost up to several hundred thousand dollars per unit. Then there’s the additional expense of hiring crew to manage these rigs.”

“Steep production costs”, Horbatuik said, is the chief reason why smaller shops and independent cinematographers haven’t really delved into 3D production. With the AG-3DA1 that challenge has been addressed and resolved, he said. “At a price point of $22,000, it significantly lowers acquisition and operational costs.”

Many users may not even buy the camera outright, but can rent it for a limited time. 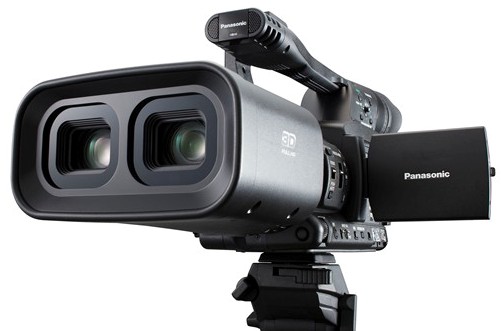 Independent producers who need the camcorder for short-term projects could hire it from rental companies, Horbatuik noted. “In fact, since we started shipping the AG-3DA1 in Canada earlier this month, most shipments went to rental firms. Typically, for a week’s rental they would charge five per cent or so of the unit’s value — around $1,000 a week.”

While independent cinematographers are likely to be the initial users, Panasonic expects the target market will expand very quickly.

In the healthcare space, he said, AG-3DA1 could enhance the visual element in remote surgery procedures. “High-definition video is already being for this purpose, but the 3D visuals provided by the AG-3DA1 would add another layer of accuracy.”

Editing the captured 3D footage isn’t a complex process at all, according to Horbatuik.

He said stereoscopic 3D editing is supported by the latest versions of all the commonly used commercial video editing applications – including Apple’s FinalCut Pro, Avid’s Media Composer, Adobe’s Premiere Pro CS5, and Quantel’s Pablo. “With some of these products 3D editing capability is standard, with others you need to install and pay for an extra plug-in.”

And the workflow itself, he said, is not very different from video editing in 2D.

The plug-in needed to perform these functions within Adobe’s Premiere Pro CS5, for instance, is Neo3D from Cineform Inc. in Solana, Calif.

In an exclusive interview with ITBusiness.ca, Colin Smith a senior solutions architect with San Jose, Calif. explained how the plug-in works.

He said a professional 3D video camera – such as Panasonic’s AG-3DA1 – captures footage on two SD cards cards. “So the video comes into the computer as two separate files — you label them left eye and right eye.”

Then through Cineform’s Neo3D plug-in (installed on your computer) you integrate the two streams through a process call muxing. “Basically, you bring in the two video sources and ‘mux’ (or blend) them in stereoscopic space. When doing that you get to choose the level of separation of the eyes, so you’ve got lots of control over how the video looks before it’s exported.”

Smith said Cineform also has a full-blown colour engine that enables you to apply a variety of effects to your footage. “So you can completely transform your video, making it look like the 3D matrix or like 3D technicolour. When your editing is complete, your exported file goes from Cineform right into the Premiere Pro timeline.”

What really simplifies the workflow, he said, is the connection back to Cineform from Premiere. “Let’s say you’ve dropped your clip into Premiere Pro, you’re editing in 3D, and decide you need to make a change back in Cineform. No problem. All you do is edit in Cineform and the update is reflected right in the [PremierePro] timeline. You don’t have to wait and export another 3D file. The two programs are directly connected.”

Other tools you would need to edit and playback 3D footage captured with the Panasonic camera include a production monitor and 3D glasses.

Panasonic’s second 3D camcorder offering – the HDC-SDT750 – ships in October and is targeted at the consumer market.  Priced at $1,600, the camera itself shoots in 2D, but ships with a removable 3D conversion lens, which the user needs to attach to the fixed 12x Leica zoom lens. (The zoom feature isn’t available in 3D mode). 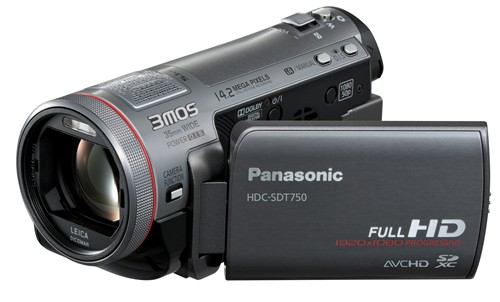 The included 3D conversion lens is designed to record right-eye and left-eye images simultaneously through its two lenses, thus resulting in video that can be viewed in 3D. The right and left images (each with 960 x 1080 pixels) that enter through the lenses are recorded using the side-by-side method.

Amateur videographers, who want to experiment a bit of 3D without laying out a whack of money on an expensive 3D camcorder can get some great tips from a comprehensive tutorial on Adobe TV titled 3D steroscopic editing with Premiere Pro CS5.

Helmly tells how he jury-rigged a mount for two Flip video cameras using simple Ikan system, trying to mimick the space between his eyes. “The cameras were still a bit too far apart. But it’s as close as I could get them together, so it’s part of the limitations of this method.”

His solution to this challenge was to make sure he didn’t shoot too close to the subject. “I shot at around eight feet out and the result was pretty amazing.”

Helmly has also experimented with other rigs, such as one from Canon, on which he mounted two identical AVC HD cameras – costing under $500 apiece.

“You need to make sure each of these cameras are in the same mode,” Helmly said. “It’s best to start with the default mode – maybe 1920×1080 at 30p. “You also want ensure your zoom levels are set all the way back.”

For commercial 3D videography, however, this informal method of rigging up two cameras simply isn’t suitable as it doesn’t provide the level of quality assurance required, Helmly suggests.

For such projects, says the Adobe expert, the Panasonic AG-3DA1 could be a great choice.

Helmly, who is based in Annapolis, MD., says he shot footage in the downtown areas of the city for a couple of weeks using the AG-3DA1. “I’m sold on it.” 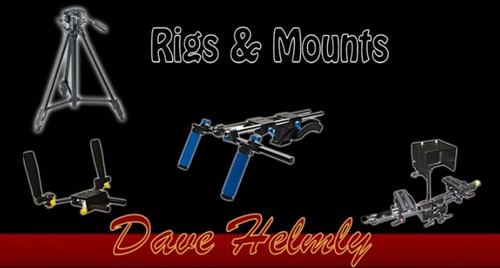 He said with the Panasonic product you can pan and zoom, “because you’re guaranteed to get the left and right info at the same rate.”

Another attractive feature, he said, is the convergence button on the device. It has to do with the distance between your eyes, so to speak, to create the best 3D effect. “Panasonic has come up with a mixed mode, so  you just hit the button on the camera to  turn a dial to superimpose both images. What’s nice is it actually works as you’re looking through the viewfinder, so you don’t always have to depend on the LCD.”

Helmly predicts Panasonic -3DA1 “will be one of the leading camera recorders out there, especially in the broadcast industry.”