Adobe Systems Inc. today unveiled Photoshop Elements 9 and Premiere Elements 9 saying these applications offer users the breadth of functionality and ease of use they’ve long been clamouring for.

Though targeted at “enthusiasts and hobbyists,” Photoshop/Premiere Elements 9 include certain features that aren’t even present in their professional counterparts, an Adobe spokesperson noted.

“For instance, Photo Merge Group Shot is exclusive to Photoshop Elements 9,” Colin Smith, senior solutions architect at San Jose, Calif.-based Adobe told ITBusiness.ca.  Were this feature not offered, he said, only users with a certain level of expertise would be able to perform the task.

The ‘Instant Movie’ feature in Premiere Elements 9 isn’t available Premiere Pro, as most users of a professional video editing app would likely know how to edit their video footage into a movie, and make a DVD, Smith said.

“Likewise, Instant Auto Analyser – a tool in Premiere Elements 9 – isn’t in Premiere Pro CS5, because we expect professionals would understand what good video is.”

Smith said enthusiasts can have that tool analyze their video footage. “It finds the blurry stuff, the shaky stuff, the out-of-focus stuff … But it doesn’t throw all that away.  It alerts you to it, and asks whether you want to trim it out of your final movie. So the decision is yours.”

People recognition is part of the Auto Analyzer. The tool automatically tags people so you can search for them later.

According to Smith, Mac users will be particularly pleased with the latest versions of Photoshop and Premiere Elements because they offer features previously available only in the Windows versions of those products. 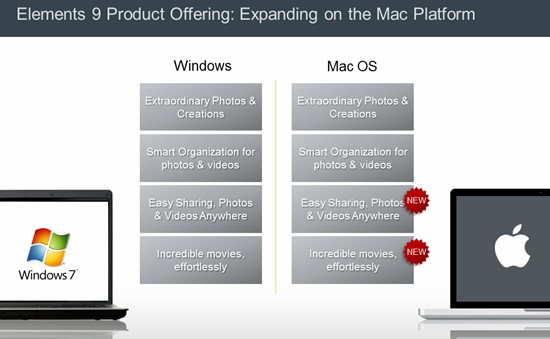 For instance, he said, earlier Mac versions lacked the Smart Organization for photos and video feature, available only to Windows OS users.

Instead Mac users had Bridge, he said, an application that lacked the intelligence of Smart Organization. “Bridge is essentially like a browser, a Window. You don’t really load anything into it, you just preview stuff.”

“With Smart Organization, what you’ve got is a real database,” Smith said. “Now this feature is available to both Mac and Windows users.”

Easy sharing of photos and video, another feature earlier available only to Windows users, will now be enjoyed by Mac OS users too, he said.   “Essentially, we’ve restored the balance and made all these cool features available on both sides.”

Many new features in Photoshop/Premiere Elements 9 simplify and speed up workflow, even for intricate tasks, Smith noted. “For instance, Photoshop Elements has a tool that de-clutters and repairs photos quickly.”

Likewise, he said, Adobe has incorporated webDVD into Premiere Elements. 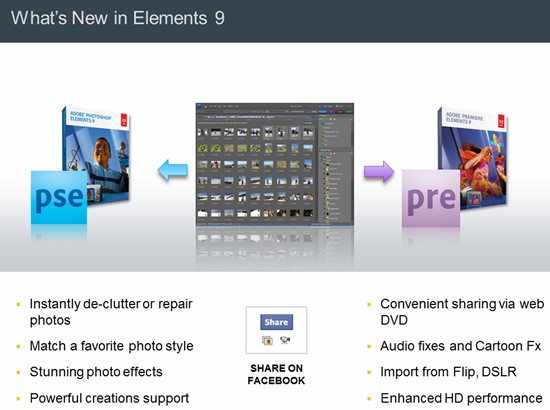 This feature was previously available only in the Premiere Pro as part the Encore DVD authoring tool. “It’s Flash based Web site that mimics exactly what a DVD or a Blu-Ray disk would do,” Smith said.

It wasn’t available in the Premiere Elements 8, but has been incorporated into version 9 that launched today. After creating an online DVD using this tool a user could stick it up on a Web site with a click of a button and share it with anyone, he said.

Several new audio fixes have also been included in Premiere Elements 9, the Adobe exec said. “There are effects that minimize hum, hiss and background noise and you just drag and drop them in the audio stream in your timeline.”

Attractively priced, high-definition camcorders (such as the Flip video camera) are having a huge impact on the consumer videography market in Canada, and specifically on video editing applications, Smith noted.

These new cameras, he said shoot AVCHD (advanced video coding high definition) or HDV (high-definition video) in full 1080p. “The quality is awesome. The only problem is the footage is very highly compressed … that’s how they’re able to get HD video on such a small camera.”

He said handling such extreme compression requires a great deal of CPU power. “So in Premiere Elements we’ve created a way of stepping down the resolution a notch while you’re working on the footage, so you can edit smoothly without the video freezing.”

“The final output, however, will look as good as when it was shot. So you can output it to DVD or a Blu-Ray disk and it will look awesome.” 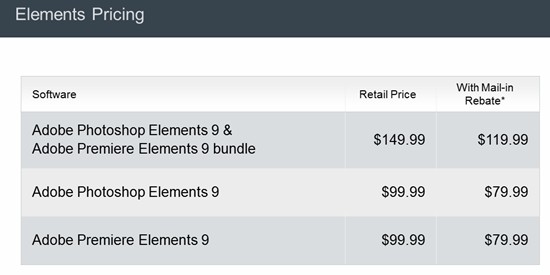 This technique for handling highly compressed video during the editing process was harnessed from Premiere Pro (Adobe’s professional video editing product) and incorporated into Premiere Elements 9, he said.

Joaquim P. Menezes
Previous articleHow to get the most out of your Android’s battery life
Next articleAdobe’s Tom Barclay on publishing to various digital platforms