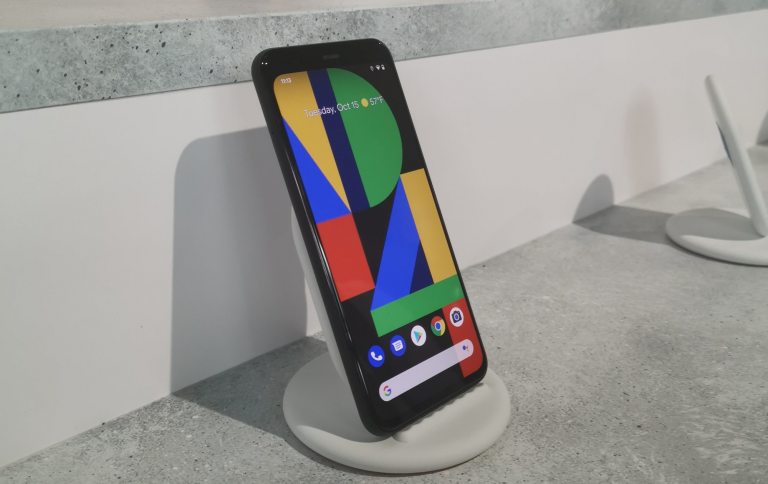 With files from Tom Li

NEW YORK CITY — Google LLC kicked off its annual product launch event – Made By Google – this morning in New York City, announcing a swath of products including the Pixel 4, Pixelbook Go, and much more.

Google’s latest flagship has arrived exactly as it was described in the mountains of leaked information prior to the launch.

Although it has a similar silhouette to the Pixel 3, the Pixel 4 comes in new colors, including a vibrant orange option being added to the usual options of black and white. It also abandons the two-tone glass finish for a unified flush back.

Google’s camera wizardry is nothing short of astounding. Through pairing a single camera with its Pixel Visual Core image processor, the Google Pixel 3 could take pictures that rivaled the best multi-camera smartphones.

But with the Pixel 4s, Google has decided that the time is right for an extra camera. Now, aside from their 16MP main camera, the Pixel 4s also include a 12MP telephoto camera. The two sensors, along with the flash, are housed inside a square camera block that looks awfully similar to the one on the iPhone 11 Pro, which has three cameras. The Pixel Visual Core has also been replaced with a mysterious Pixel Neural Core chip. Whether it’s a simple rebadge or a completely new product remains unknown.

Whatever the case may be, the Pixel Neural Core should bring even better camera performance. Google has demonstrated a variety of low-light and post-processing demos onstage, including Live HDR+, dual exposure sliders, machine learning-enabled white balancing and portrait mode, and improved night mode.

Google now employs a single front camera across both models. To compensate for the lack of a second camera, Google has added a depth sensor, which enables air gestures much like the LG G8 ThinQ and face unlocking.

Speaking of face unlock, that’s the only biometric authentication method. For whatever reason, Google has removed the fingerprint sensor from the Pixel 4. The company is touting that it possesses the fastest face unlock feature in the market.

To aid with the hand motion controls employed through Motion Sense, Google has added radar capabilities to the phone with a Soli-powered radar chip built right into the device.

While their display dimensions are identical to the previous generation, there are still leaps in display quality. To provide a buttery viewing experience, the Pixel 4s now use a 90 Hz “Smooth Display”. Traditionally, smartphone display refresh rates are set at 60Hz or lower. Upping the refresh rate can help show finer movements in animations and make media appear smoother. The smoothness may be more taxing on the battery, so the Pixels may allow users to customize the refresh rate in settings.

Thankfully, there won’t be a notch this time around. Both Pixel 4 and the Pixel 4 XL now have flush top bezels. They’re still a bit unsightly but are far more tolerable than last year’s monstrosity.

The Pixel 4’s battery size has been increased to 2,800 mAh and 3,700 mAh respectively, which are slightly larger than last year’s Pixels.

Google has also bumped up the RAM capacity to 6GB for both devices, bringing them more in line with other 2019 flagship phones. Other hardware includes a Qualcomm Snapdragon 855 processor, Google Titan M security chip, and 64/128GB of storage. All Pixel 4s run Google’s Android 10 operating system.

A few returning features include Active Edge (which triggers the Google Assistant when you squeeze the phone), wireless charging, and Google stand support.

Neither phones have front-facing speakers this time around.

The phone will come equipped with a brand new Recorder app that will transcribe all recordings in real-time, even in airplane mode.

The newest member of the Pixelbook family, the Pixelbook Go brings everything the older models brought with them, but in an all-new lightweight shell; as it measures at just 13mm thin and 2 lbs heavy.

Google said in the announcement that its two biggest priorities going into the design of this product were the size of the product, which was handled with the lightweight design, and the battery life. The Pixelbook Go will come with a 12-hour battery life to achieve this goal, with Google claiming it will last for 2 hours on just a 20-minute charge.

The device will come equipped with a 13.3 inch touch screen, ultra-quiet Hush Keys, a new grooved back for enhanced grip, and will run on Chrome OS.

The Pixelbook Go can be configured with up to an Intel Core i7 processor, 16GB of RAM, and 256GB of storage. The Core i7 variant also carries the 4K Molecular display.

It also has a Titan C security chip, which is essentially Google’s variant of the Trusted Platform Module. Its function is mostly to store encryption keys. This chip was initially introduced with the Pixel Slate.

Google’s Pixelbook series has always sat at higher pricing brackets. Similar to the Android Go operating system designed for budget devices, the Pixelbook Go knocks the starting price down to CA$879. It’s available in black and pink and can be pre-order now through the Google Store.

While many people waited with baited breath for the launch of the Pixel 4 and the Pixelbook GO, today’s event also brought with it a couple of new Google Nest products.

The new Nest Mini is designed to be the next generation of the popular Google Home Mini, as the company consolidated its Nest and Google Home teams together under the Google Nest team.

One of the biggest improvements over the previous iteration is the upgraded sound quality, as it will provide twice as powerful bass (measured at 60-100 Hz at max volume).

As well, by creating a network of speakers throughout your house, you can bring your audio experience with you wherever you go, even while streaming.

To improve the Google Assistant capabilities, the Nest Mini comes equipped with a machine learning chip that brings with it one TeraOPS of processing power.

Already available for pre-order, the Nest Mini will cost US$50.

In an effort to improve the connected home as a whole, Google has launched its new Nest Wifi; the successor to the Google Wifi solution.

Composed of two separate parts (the Nest Wifi router and the Nest Wifi point), it plugs directly into your modem, delivering up to two times the speed and a 25 per cent increase in coverage; maxing out at 3,800 square foot homes. The network will be manageable directly through the Google Home app and will include family controls such as limiting times of usage for children.

The Nest Wifi point will also be able to leverage the Google Assistant tool for your convenience.

This system will be available in 8 global markets in 2019 and is available for pre-order in the U.S. on November 4 starting at US$270.

Unless you have been living under a rock, you will know that Air Buds have been all the rage. But Google is hoping to disrupt that market with its new Pixel Buds.

The biggest selling feature may be the ability to access Google Assistant directly through the wireless headphones, even when your phone is a football field away from you (or three rooms away indoors).

While it brings with it noise-cancelling capabilities, it also takes advantage of the spacial vent to reduce the feeling of plugged ears, while also allowing the user to hear a certain degree of environmental sound so that they are still aware of their surroundings. How that will balance itself is still to be revealed.

Speaking of balance, the Pixel Buds will also come with dynamic volume levels, so that the volume of your audio will automatically adjust itself as you step into louder or quieter areas.

The headphones will be able to live for 5 hours of listening time on a charge on their own, or for 24 hours when in the wireless charging case.

Along with all of the device announcements, Google also unveiled the date of the launch for its cloud-based video game streaming platform, STADIA.

For those who pre-ordered the Founders Edition, it will show up at their doors on November 19 with games available starting at 5 PM PST.

*Buckley Smith’s flight and travel accommodations were paid for by Google. Google did not review this article prior to publication.

Buckley Smithhttps://www.itbusiness.ca
Staff writer for IT World Canada. Covering the world of technology as it applies to business. Buckley is an avid sports fan who loves travel, food, and music. Can be contacted at bsmith@itwc.ca or 416-290-2000.
Previous articleIndustry anti-messaging abuse group meets this week in Montreal
Next articleITWC’s 2020 flagship events program revealed