How does a major utility company maintain high safety levels, while disseminating crucial information to stakeholders automatically, accurately, and in real time?

To some these may seem mutually exclusive goals, but not to Guelph Hydro Electric Systems Inc., the local electricity distribution company for the cities of Guelph and Rockwood in Ontario.

VIDEO: GUELPH HYDRO GETS A CHARGE WITH GIS

The new system has also helped Guelph Hydro rein in costs and dramatically boost the productivity of its field staff.

Dan Amyot, Manager of Information Systems at Guelph Hydro, contrasts this happy state of affairs with the situation just a few years ago.

“At the time, our field inspections used to be done with pen and paper,” Amyot told ITBusiness.ca. “Managing this paperwork, cataloguing it back at the office, and ensuring it was all available at a later date was a long and laborious task.” As all these jobs were done manually, they were also prone to errors and inaccuracies.

To resolve these and other challenges, last year, Guelph Hydro built a Web-enabled GIS (geographic information systems) app internally using ArcGIS Server, a software offering from ESRI Canada Limited that enables the creation, management, and distribution of GIS services over the Web to support desktop, mobile and Web mapping applications.

Guelph Hydro had first started using technology from ESRI Canada Limited in 2003 to convert paper and CAD (computer-aided design) maps to GIS. In the years following, use of GIS had an impact on many areas across the organization.

Blackberrys and the art of city street maintenance

Last year, the scope and reach of the application was extended much further — to field workers and potentially even the general public — when Guelph built its Web-based GIS application. It links back to the utility’s customer information system for displaying historic meter read information and current customer billing data.

He said ESRI’s offering has its own front-end interface to Internet Explorer. “It’s a VB Net application that interacts instantaneously with our own custom apps and works very well.”

The payoff from Web-enabled GIS app was swift and spectacular.

For one, the application streamlined and simplified the task of entering, reconciling, and retrieving field-inspection data.

“Field workers enter details of their work into Panasonic handheld units or Panasonic tough books,” Amyot noted. “This data is then reconciled with our corporate database as quickly as possible. The process reduces the number of data entry errors, as well as time spent having one group of people read information recorded manually by another group.”

Since the new system was rolled out, feedback from field workers has been very positive, according to Heather Minogue, a GIS technician with Guelph Hydro. “They find the application so much simpler after the cumbersome and time-consuming paper-based process they used in the past.”

Previously, she said, field workers had to take a pile of documents out with them and catalogue their hand written reports by street. All that paper would get stuck in a file and probably thrown out after a few years. Today, whatever they record on the Web-based applications is stored in a master database, where it will be saved for years to come, and can be quickly retrieved as required.

“For instance, we can do queries to check how many transformers need to be painted, and hire a contractor for that task if needed.” 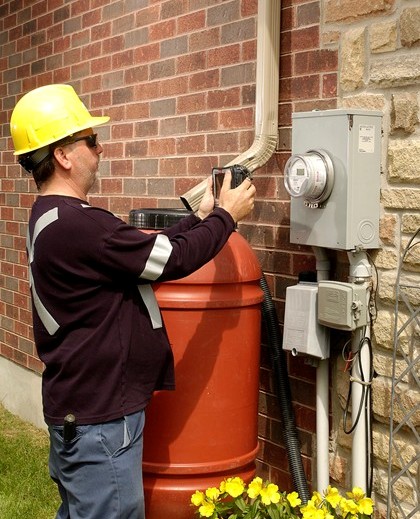 The new GIS system provides Guelph Hydro with a geographic view of trouble call locations so they can immediately identify outages and dispatch crews. “The reporting features help us prepare reports for Ontario Energy Board to let them know we’ve been maintaining our system properly,” Minogue said.

She said the system has also radically improved and speeded up the process for inspecting poles, transformers, PMH units and other assets in the field. “When field workers click on a tool we’ve created, it brings up a form, which displays data we already know about that asset. Workers can do their inspection, recording any problems on their handhelds.” All this information, she said, is stored in a central database, which has replaced a paper-based filing system.

Minogue demoed another application created to report on and record all smart meter exchanges in the field.

And visual data is often recorded as well.

“Field workers use the handheld’s built-in camera to take a picture of the meter being removed, as well as its replacement,” she said. “They use the bar code scanner to record the new meter number. The name of the person doing the exchange is also entered.” All this data gets integrated into Guelph’s customer information system.

According to Amyot, the benefits of the Web-enabled GIS system are experienced in three major areas: cost, productivity, safety.

Huge time savings are an associated benefit, he said. Guelph has integrated its meter replacement process with its mapping system. No sooner is a meter replaced than a work order is automatically created, and the information transmitted to the master database. With around 50,000 meters to replace, this automated process has shaved hours of intensive manual labour, while increasing accuracy.

On the productivity front, building the meter replacement process on top the mapping application has helped Guelph boost productivity of some of its field workers by as much as 500 per cent. Today two people replace approximately 150 meters a day.

“Accuracy and safety has also improved,” Amyot said, “because at least a dozen people in the field, including linesmen and inspectors, have access to our mapping system. As they go about their work, they constantly interrogate the system, adding to quality control.”

A key pre-requisite for the ongoing success of GIS system is Web-enabling Guelph Hydro’s custom apps. “All these applications have all been written in Visual Basic. Now we’re converting them to VB Net,” said Amyot. “It’s a much easier interface to Internet Explorer.”

The Web-enabled GIS application – built with ESRI products – aligns with Guelph Hydro’s “smart grid” program and philosophy. “The idea behind smart grid is to have the ability to learn about and respond to events in the field with little or no user intervention,” Amyot said.

GIS is what makes the smart grid “smart”, according to ESRI Canada’s Miller.

“When GIS is used to model the grid, it can be the foundation for not just outage management (a real time reporting system of the state of the electricity flow in the grid), but [also for] a distribution management system, which monitors and controls the grid,” Miller said.

“GIS maps the smart grid and gives it intelligence,” he said. “It makes the grid smart enough to become self healing when outages or issues occur.”

At Guelph one of the first smart apps rolled out was ‘Outages Summary’, which automatically displays locations in the city that have no power. “We are also working to auto respond to such outages, as soon as an area loses power,” said Amyot.

Amyot said basic coaching was needed on how to interface with the Web browser. “We had ESRI Canada come in and give us a three-day training course, but that’s all we required in terms of training.”

In a couple of weeks, he said, Guelph Hydro will complete the process of customizing all its apps.

An interface has also been created between the maps and the GPS (geographic positioning system) on Guelph Hydro vehicles. “When our people in the control room look at the mapping system, they can see where these vehicles are, along with the primary distribution system,” Amyot said.

He said by knowing the location of field workers and the feeder they’re working with, steps can be taken to minimize injuries or accidents.

A final step in this project will be using the mapping system to make aspects of Guelph Hydro’s valuable proprietary information available to the general public in a safe way.

Since the advent of Google Earth, Amyot said, a lot of people are accustomed to viewing mapping systems through a Web browser. “We see this as a great opportunity to provide customers access to some of our information.”

For instance, he said, Guelph will soon be able to colour code various outages on its GIS maps and display these on the Web to visually depict the type of outage and estimated restoration time.

“If there’s a major tornado that passes through the city of Guelph, we’ll be able to colour code specific areas based on estimated restoration dates. With all this information, the general public should be able to take appropriate steps.” This portion of the project, he said, is likely to be completed and by the end of this year.

And moving forward, the scope of information offered to the public will go beyond notification of problems, such as power outages, or natural disasters, such as tornadoes.

“We’re reviewing the feasibility of displaying all of our construction work on the Web,” Amyot said. “But while there’s information we can put on a Web layout mapping system, there’s also stuff we can’t.”