FetchBot lets you market your small business with gamification

If you’ve ever drained your smartphone battery playing Pokémon Go, or found yourself procrastinating a work day away playing Pac-Man in your browser, you know just how addictive simple video games can be. What if you could take that gripping engagement and bottle it for your marketing strategy?

That’s the idea behind Fetchbot, an online gamification platform developed by Calgary-based DeepMarkit Corp. Targeted at small to medium-sized businesses, Fetchbot presents an assemble-your-own video game dashboard to businesses, and ties in a promotional call to action as a further incentive to prospective customers.

Why would people play a game published by a business? Kevin Kraft, the chief operating officer at DeepMarkit, is ready with several examples. Starbucks for Life combined cartoon characters and simple point-and-click games with the coffee chain’s loyalty rewards program over the summer. McDonalds is now famous for its Monopoly-branded collecting contest.

“For the longest time, these online marketing games haven’t been available to small businesses,” he says. “They lake a lot of development time and a lot of money.”

Businesses using the FetchBot platform simply choose from 10 different gaming templates. If you’ve ever browsed the Games section on the App Store or Google Play, you’ll be familiar with the concepts. There’s an endless runner style game, a pattern-matching game similar to Candy Crush, a racing game, a scratch and win card, or just spinning a really big wheel.

Each business can customize the game differently, without needing to know how to code, using Fetchbot’s visual tools. Businesses can add their logo, edit text, and choose from an array of characters and design themes to make the game their own. The reward given to the player is also up to the business. 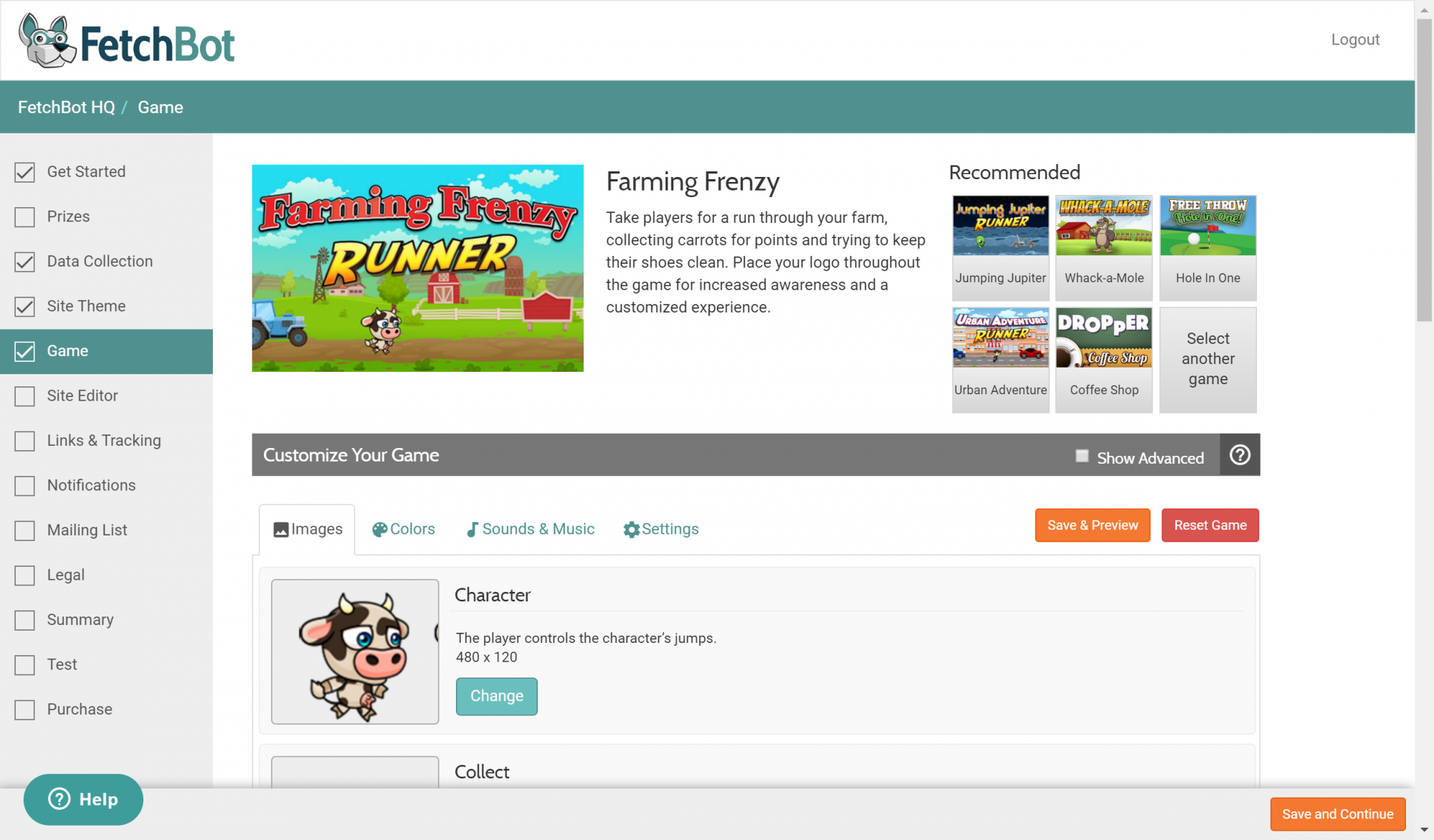 For example, Kraft says, FetchBot customer Vital Proteins built an endless-runner game featuring a cow character that had to collect as much of the company’s product as possible, while avoiding manure and other obstacles appropriate to the brand’s business of selling pasture-raised cattle collagen peptides and beef gelatin. Upon completing the game, the player received a coupon for its real world product.

FetchBot is a complete do-it-yourself system and just about anyone can use it, Kraft says. “We really wanted to cover the entire spectrum for level of expertise. Businesses that aren’t tech savvy can just go in there and choose what’s available.”

However, there are some steps a business will have to take themselves after building a promotional game on FetchBot’s platform. Aside from publishing it to the web, there’s no built-in distribution of the game. So businesses will have to do that by buying click-through ads, or pushing customers their from their own emails, social accounts, and web pages. 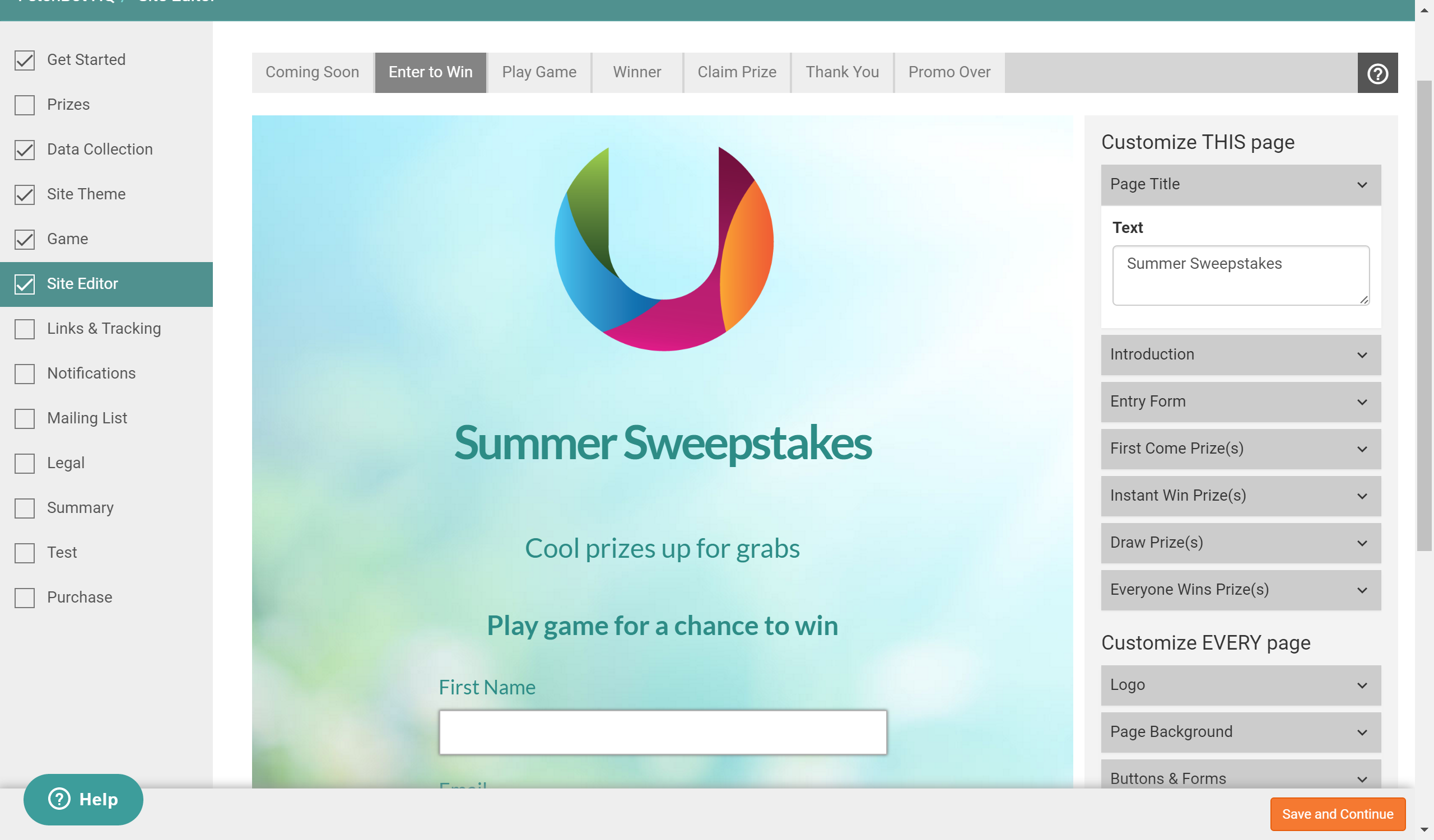 Businesses also need to be responsible for any legal considerations around running a contest or promotion on the platform, Kraft says. “We try to give the business all the tools to be compliant, but it’s really up to the business.”

FetchBot was built with diligence to both U.S. and Canadian laws around contests, he explains. For example, skill-testing questions can be enabled to redeem a prize, so the game is not considered one of pure chance. Legal disclosure text is automatically generated for each game, but businesses may want to edit it to specify how long they have to redeem prizes, or to bar their own employees from winning prizes.

For Quebec, where promotional contests must be registered with the government, a business will have to do so themselves.

Still, for the cost of $399 USD (although based in Calgary, DeepMarkit has started by targeting the U.S. market) for a 90-day promotion, marketers that want to use a game to engage their audience save themselves the costs and time involved in developing a game from scratch. Plus, the games available are actually fun to play.

In 2012, Gartner research vice-president Brian Burke famously predicted that 80 per cent of gamified applications would fail to meet business objectives by 2014. The reason, he said, would be because businesses would focus on the hallmarks of games – badges and points – instead of the engaging design that makes people really enjoy playing a game.

“Brands can leverage gamification to engage consumers to better understand their products, and become advocates for the brand to provide product endorsements, and drive customer loyalty,” he wrote.

FetchBot offers small businesses that opportunity. Just think – the next time your target customer wants to procrastinate at work, they could be engaging with your brand.