Canadian entrepreneurs might feel like a beaten boxer that can’t get up off the stool for the last round of the fight, but now there’s a Dragon that’s willing to help them win.

Bruce Croxon, the co-founder of Lavalife and one of the investors featured on CBC’s Dragon’s Den, is starting a new fund for technology entrepreneurs with Round 13 Capital. Croxon is a boxing fan and named the firm after a famous 1975 bout between Mohammed Ali and Joe Frazier. After a brutal 13th round of the heavyweights punishing each other, neither one could get off the stool for the next round. Though Ali did manage to stand to claim the victory, he famously quipped “that’s the closest to death I’ve ever been.”

Croxon’s goal to raise a minimum of $100 million by this Fall. Investors are being asked to kick in enough money that “they’ll have incentive to pick up the phone when it rings” and startups receiving funding will get it in pieces of between $1 and $5 million. 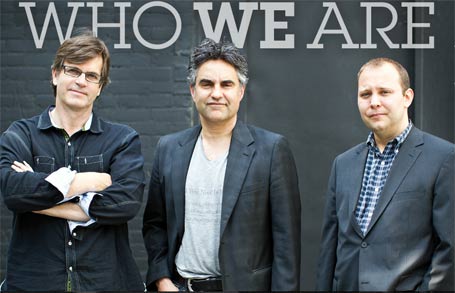 From left to right: John Eckert, Bruce Croxon, and Scott Pelton of Round 13 Capital.

It will go to tech startups seeking series A financing, firms that have proven their concept and are ready to scale up to larger revenues. Croxon, the managing partner of Round 13, announced his plans today at an event in Toronto.

“We’re looking to help entrepreneurs get off the stool,” he says. “We’re looking for companies that know what the cost of acquisition is of a customer, and at least have a feel of when that customer is going to be spending money on their application. We want to be putting more fuel on the fire.”

Croxon has partnered with two other venture capitalists for Round 13. Scott Pelton has invested in Fixmo, BumpTop, Datawire and Sysomos. John Eckert co-founded McLean Watson Capital, the majority investor in i4i, which won an prolonged court battle with Microsoft Corp. over patent infringement regarding the use of XML in Microsoft Word.

The trio of venture capitalists are about a quarter of the way to reaching their fundraising goal, Eckert says. But he can’t reveal who’s committed to invest yet. The strategy for its next steps are to approach corporate markets and institutions for investments.

“Those who give us money know we’re going to invest it in a diversified portfolio,” he says. “In a portfolio with many companies, and we’re working with them, the chances of making money are greater. Hopefully in that pool of companies, we’ll find someone that really rockets.”

The members of the board will play a mentoring role for the businesses Round 13 invests in, Koudas says. “We’ve been through the process of trying to find funding.”

Round 13 is looking to fill the gap between the talented technology entrepreneurs in Canada and the amount of venture capital available to help them grow, Croxon says. He points to the seed funding area of the market becoming more robust with incubators like the Ryerson Digital Media Zone, Extreme Startups, and MaRS’ Jolt offering some initial funding to startups. But what happens to entrepreneurs after that?
“
What happens is that founders have to go to the States to get the next round,” Croxon says, “or they end up selling themselves short because they don’t have the funding to continue.”

With the press launch, Croxon says he hopes to attract the attention of institutional investors. His goal is to become the go-to place for growth stage investing in Canada.