The Commission for Complaints for Telecom-Television Services (CCTS), an organization dedicated to helping Canadians resolve their telecom and TV complaints, said that despite the exceptional increase in service use, customer complaints against service providers are down 19 per cent from last year.

Between August 2019 and July 2020, Canadians filed 15,661 complaints about their phone and internet services. Complaints against wireless services continue to rank first, accounting for 44 per cent of all issues filed. Internet issues ranked second at 27 percent, followed by TV at 15 per cent and landline phones at 13 per cent.

Unsurprisingly, most of these complaints were directed at the top three service providers due to their massive clientele. The CCTS accepted 3,815 complaints against Bell, followed by Rogers with 1,781, and Telus with 1,166. 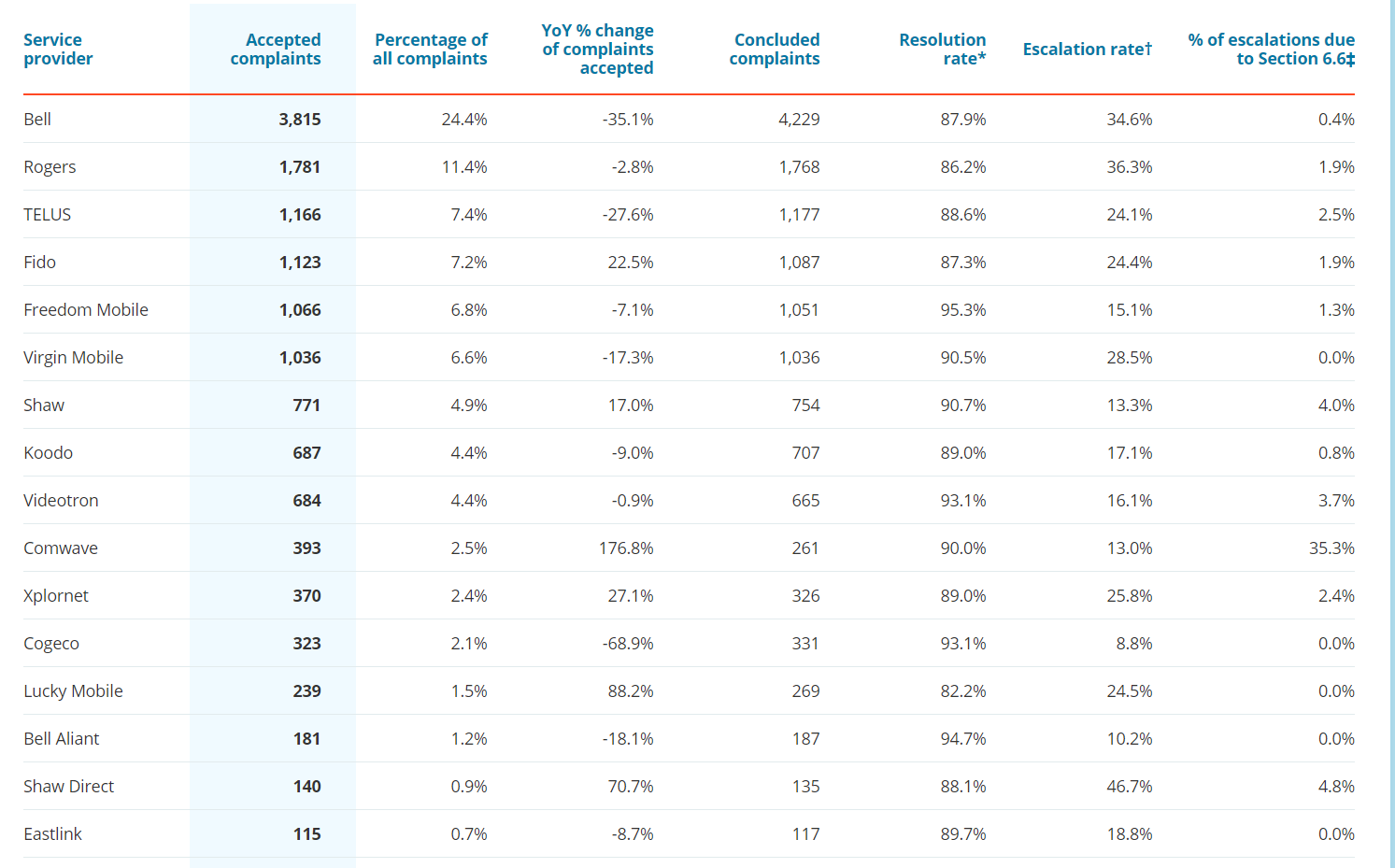 With that said, the number of issues raised dropped across the board. The number of wireless and internet issues both saw a two per cent drop in volume. TV complaints dropped by 24 per cent, the largest drop across the top three services.

While the number of overall issues has dropped, their distribution has shifted. As service providers adapted their business to the pandemic, communicating policy changes to subscribers turned more nebulous. This was highlighted by the 12 per cent increase in disclosure issues. On the bright side, removing data caps in the early months of lockdown led to a 22 per cent drop in complaints against data charges.

In a previous report, Opensignal vice-president analyst Ian Fogg told ITBusiness.ca that mobile data use increased instead of decreased despite more people staying indoors. Despite so, reports against loss of service and quality of service have dropped by 18 per cent and three per cent respectively.

Internet services share similar trends with wireless, except that complaints against quality of service ranked top with a 12 per cent increase year over year. Disclosure issues also rose by 17 per cent.

During the pandemic’s peak, TekSavvy, Start.ca and other independent providers increased their internet subscription cost. They blamed the surging internet use during the pandemic and, more importantly, the ongoing wholesale rate war between the incumbents and the independent. The cost increase ranged between $5 to $10.

TekSavvy announced another increased the price a second time at the end of August. Its impact on customer complaints was outside of the CCTS’ report period.

But despite their increased prices, the incumbents received the most disputes over monthly charge increases. Out of the 1,400 complaints submitted, 36 per cent dealt with internet service pricing increase. Bell, Rogers and Videotron accounted for 58 per cent of all complaints in this category.

Tom Li
Telecommunication and consumer hardware are Tom's main beats at IT Business. He loves to talk about Canada's network infrastructure, semiconductor products, and of course, anything hot and new in the consumer technology space. You'll also occasionally see his name appended to articles on cloud, security, and SaaS-related news. If you're ever up for a lengthy discussion about the nuances of each of the above sectors or have an upcoming product that people will love, feel free to drop him a line at [email protected]
Previous article
Non-profit’s CMO says we don’t need more data, we need to use data differently
Next article
Hashtag Trending – Salesforce acquires Slack; A space claw; Shopify shares sales data for Cyber Monday