At least one SMS marketing business is seeing a decrease in usage since Canada’s Anti-Spam Legislation (CASL) came into effect July 1.

The anti-spam law that requires businesses to collect explicit consent from Canadians before it emails them has been a hot topic this summer among email marketers. Many companies were working to get into compliance with the new law by creating customer segments under the categories of “express consent” and “implicit consent.” As a result, Canadians received a healthy influx of email ahead of the July 1 deadline asking them to give their express consent to maintain email communications. But it turns out email wasn’t the only communications channel effected. Since CASL applies to all commercial electronic messages (CEMs), those that use text messaging to communicate with customers have also been hit.

Bob Bentz is the president of ATS Mobile, which operates online self-serve text messaging marketing tools at 84444.ca.  The short code service, operating at 84444 in the U.S. and Canada, saw a boost in business during the last two weeks of June as its customers hustled to receive opt-in from Canadians to continue to text them. Bentz estimates there was a 50 per cent increase in text message broadcasting during the last two weeks of June. But after July 1, things are different. Text message broadcasting has dropped significantly because many customers decided not to opt-in.

Many SMS marketing programs operate with short codes like 84444. A customer interacts with the messaging service by texting commands like “INFO” or “STOP” to a four-to-seven digit number. Texting is a popular marketing channel among smaller businesses like restaurants, dental offices, radio stations, or other local businesses looking to drive foot traffic by texting out deals to a customer list. 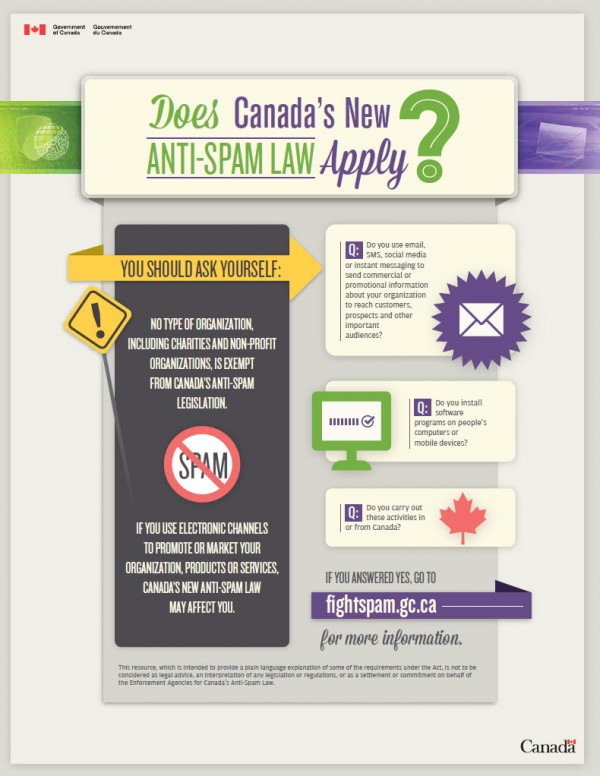 “Short codes have always operated on an express consent basis,” he says. “We obviously have concerns when it was coming in but we had a lot of processes in place.”

Users of common short codes can only send messages to users that first opt-in by sending a text to the unique number, Eby explains. CASL did require that each business message identify the sender of the message and that would have been a challenge to do in the limited character set of a text message. But a workaround was allowed where a link in each message that leads to a web page with the sender’s information could be included in the message. Also, CASL’s requirement that a clear unsubscribe options be available is accomplished by sending the user those instruction when they first opt-in, or when they request “HELP” or “INFO” from the number.

“We haven’t seen any drop off in short code use,” Eby says.

Before CASL, Bentz would always recommend texting to his small business customers because it showed the best return on investment. Since people don’t receive spam text messages often, they are more likely to open and read each message they receive. In fact, 84444 sees a 98 per cent open rate on its messages within 30 minutes of receipt.

“Text messaging is the least sophisticated of what we do but it’s the most affordable,” he says.

Now Bentz is turning his attention to the app development services 84444 also offers. Since a user is opting in to communications when they download an app and install it, he expects more businesses will seek to communicate with customers through push notifications there.

Brian Jacksonhttp://www.itbusiness.ca
Editorial director of IT World Canada. Covering technology as it applies to business users. Multiple COPA award winner and now judge. Paddles a canoe as much as possible.
Previous articleWhere digital marketers are getting their social fix
Next articleUsers uncovering 44 per cent of mobile app issues, survey finds

Controversial provision suspended, but CMOs should still comply with CASL