Adopt ‘be your own IT manager’ mindset to deal with BYOD

The bring your own device trend is creating a “be your own IT manager” mindset among small business owners — and pushing device makers and carriers to be IT consultants, not just sell hardware and services.

That key theme emerged at the Android Solutions for Businessevent heldat the Toronto Board of Trade on Wednesday and sponsored by RogersCommunications Inc. and Samsung Canada. Though the eventfocused onvarious Samsung Android smartphones and tablets targeting the Canadianenterprise market, it also explored how the mobile workforce isdisrupting the way small businesses manage their IT. In turn, that’sforcing carriers and device makers to change the services they offer toSMBs.

“It’s not just about the devices anymore. It’s about ‘Tell me yourneeds and let’s have a conversation about that.’ It’s needs-based,”said Tisha Rattos, director of small business marketing at Rogers.

Under the old business model, hardware companies made devices, SMBsbought or leased them en masse for all their staff, and then carriersprovided SMBs with the telecom services they needed to use them. 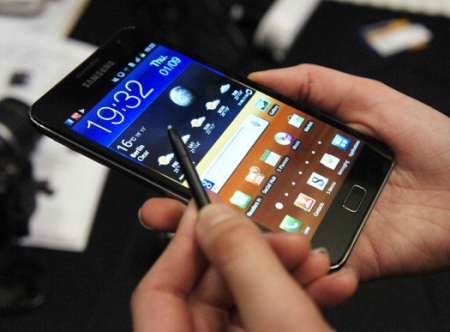 Now hardware firms are still making devices, but workers – not the SMBswho employ them – are choosing which ones to use at work. This meansSMB owners are being directly confronted with IT conundrums: how tomake sure devices of different brands and operating systems can allwork together and be managed and secured properly. It’s a tough newcourse to navigate for SMBs that typically don’t have the resources todevote specifically to IT management.

“You know at the smaller end (of the SMB spectrum) they won’t havea CIO (chief information officer),” said Rattos, whose Rogersunit caters to companies with less than100 employees.

Since many SMB owners don’t have in-house CIOs or even IT managers,they have to manage the new BYOD challenges themselves.

How are they doing that? Many are offloading their BYOD issues toservice providers like Rogers. As a result, service providers likeRogers don’t just sell mobile devices and carrier packages to SMBsanymore; they increasingly advise them on everything from how to manageand secure multiple BYOD devices todeciding which of the thousands ofmobile apps on the market would help them run their businesses better.

“They need help to get through all that complex decision makingprocess,” Rattos said. “There’s so much (mobile technology) out there.How do you start to make them all work?”

The top queries Rogers fields from small business owners these days arehow to keep in touch with their staff remotely in real time, how tomake sure their staff’s BYOD devices are secure at work, and what typeof systems and features are available to wipe or recover employees’mobile devices if they’re lost or stolen, Rattossaid.

SMBs want the solutions to these fairly complex issues to be supereasy, Rattos said.

“Ease of implementation is so huge. It has to be dead simple. Smallbusinesses don’t have time to fiddle around.”

Sensing that SMBs want to regain some control over workplace devices within the wild west BYOD landscape, mobile device makers are also tapping into the demand for mobile device management and security systems. They’re either building those features directly into the smartphones, laptops and tablets they make, or partnering with providers who can supply those features as service add-ons.

Although Apple Inc.’s iPad tablets sparked the BYOD movement whencorporate managers started taking them to the office and on the roadfor work, Android devices are gaining ground in both the consumer andenterprise markets, said Matthew Ettrick, national B2B sales managerfor Samsung Canada and the keynote presenter at Wednesday’s event.

Recent studies predict the AndroidOS will be on 60 per cent of allsmartphones by the end of this year and that it will be the top B2Bsmartphone operating system by 2015, Ettrick said. A key driver ofAndroid’s growing popularity is its open platform, he added. Unlike theclosed Apple and BlackBerry operating systems, Android’s open platformmeans thousands of apps (many of them free) have been developed andtaken to market quickly for users. But there’s also a downside, hesaid.

Android security concerns
“The major concern with Android is security (because) it’s an openplatform,” Ettrick said. “IT managers are really weighing the cost/riskbenefit.”

Samsung has tried to address those security concerns by making all ofits existing mobile business devices FIPS 140-2 certified, the highestrating granted by the U.S. government for encryption and other securityfeatures, Ettrick said.

Despite the potential security risks, many SMBs are embracing mobiledevices not just because BYOD is an unstoppable force, but also becauseof the cost benefits. By the end of 2012, 20 per cent of companies saythey will decrease the in-house IT assets they own, much of it due toemployees providing their own devices for work, Ettrick said.

It’s appealing to Coreen Holder, a small business owner whoattended the event. Her Ajax, Ont. firm StrategicResult providesbusiness planning and IT consulting to companies with one to 50employees. She has a Samsung Galaxy II smartphone but sold a tablet shebought because “I just wasn’t using it enough,” she said. Now she’sconsidering buying the Galaxy Note because it rolls the smartphone andtablet functions into one device.

Although she’s a one-woman business for now, Holder hopes to hire afull-time administrative staffer and take on two or three associatedconsultants on an as-needed basis in the next year. BYOD isn’t aconcern for her yet, but she wants to be ready for it as her businessgrows. Her focus for now is shifting from using her smartphone solelyas a communication device into harnessing it as a mobile office –precisely the kind of mobile IT advice so many small businesses areseeking today from the likes of Rogers, Samsung and others.

“It’s a gradual progression,” Holder said. “I don’t want thefunction to be so much just on the gadgets.”

Christine Wonghttp://www.itbusiness.ca
Christine Wong has been an on-air reporter for a national daily show on Rogers TV and at High Tech TV, a weekly news magazine on CTV's Ottawa affiliate. She was also an associate producer at Report On Business Television (now called BNN) and CBC's The Hour With George Stroumboulopoulos. As an associate producer at Slice TV, she helped launch two national daily talk shows, The Mom Show and Three Takes. Recently, she was a Staff Writer at ITBusiness.ca and is now a freelance contributor.
Previous articleOne in five Macs harbour PC malware
Next articleCalgary business experts encourage risk-taking