Dropbox founder and CEO Drew Houston knew he’d arrived with his cloud storage and syncing service when Apple Inc. was interested in talking about an acquisition. Not interested in selling the firm, he told late Apple CEO Steve Jobs as much, but Jobs was still interested in a meeting.

In a discussion on stage at Dreamforce, the annual Salesforce.com conference in San Francisco, Houston was interviewed by Salesforce CEO Marc Benioff. In front of a packed keynote hall at the conference where its said more than 130,000 are registered (though a chunk of those are online streamers), Houston recounted some anecdotes of a Silicon Valley entrepreneur’s journey.

“I kind of couldn’t believe it when the meeting was getting set up,” Houston recalls from the Jobs encounter. Typing the address for 1 Infinite Loop, the Apple headquarters, on his iPhone for directions, he realized the address was already pre-stored on the device.

Jobs struck Houston as a straight talker. He told him he returned to Apple because he was frustrated that a company that convinced customers to pay a total of $7 billion a year to use their products could still lose $1 billion. But he was also direct with Houston, telling him that if he couldn’t acquire his startup, was going to come after Dropbox. Six months after that meeting, Houston was watching a Jobs keynote and saw him make good on that promise.

“He was calling out by name and saying he wants to kill us with iCloud,” Houston said. 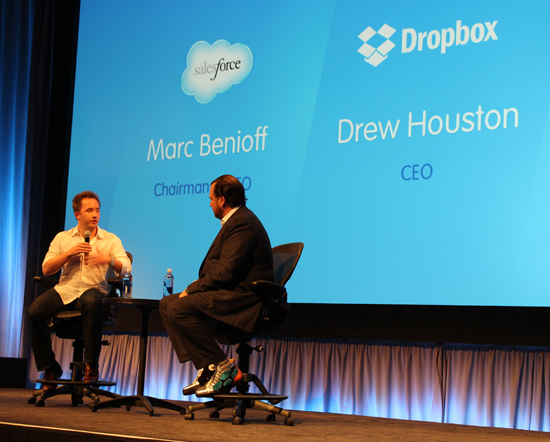 The interview between Benioff and Houston was at times awkward. Benioff began by putting Houston on a pedestal, saying he wanted to interview him on stage to show people he was a different sort of entrepreneur. Houston seemed uncomfortable, giving shorter answers to Benioff’s questions.

Benioff asked about Houston’s habit of wearing Pearl Jam t-shirts to pay tribute to his favourite band. He referred several times to the meeting he facilitated between Houston and Eddie Vedder, Pearl Jam’s front man. Houston is like Vedder in his vision for innovation and commitment to building a company instead of selling to a larger firm, Benioff said.

Other interesting anecdotes arose, including Houston’s motivation to create the Dropbox product when he found himself on a bus from Boston to New York without his USB thumb drive. The frustration of not having his files on hand inspired him to open up his laptop and code the first lines of his file syncing app.

“God how long are we going to be doing this,” he said to himself at the time. “I never want this to happen to  me again.”

Houston soon discovered building the app was a lot harder than the time one bus ride allowed. Not only the technical aspects of syncing files across many devices, but the marketing needed to convince people that file syncing was a problem they needed to solve.

People felt fine about e-mailing themselves files or using their thumb drives just a few years ago, Houston says. “No one was looking for a solution to a problem they didn’t even know they had,” he says.

Houston’s journey at Dropbox has progressed to the point that he no longer codes himself. Instead he spends his time recruiting talented developers to work for him, whether its through hiring or acquiring. The creator of the Python programming language works at Dropbox, as does the inventor of Facebook’s ‘Like’ button.

“They say you go from being a coder to a psychologist. I see that,” he says.

Having survived the launch of iCloud, and a raft of other cloud storage competitors, Houston is looking ahead to the competitors he’ll have one year from now.

“We’ve always had competitors since the beginning,” he says.