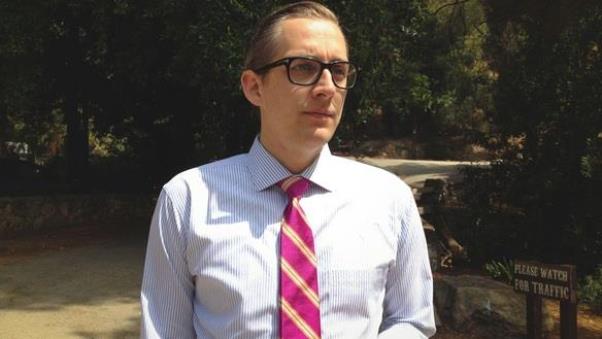 Merrill is also an office manager, entrepreneur, and sometime artist. He has been his own personal stock market since early 2008. People can buy shares in Merrill on his website KmikeyM.com and then advise him on issues about his personal and professional life, fund his ideas, and have a say in which kind of projects he undertakes .

I have to admit that when I first started to research Mike, I thought this was a clever publicity stunt. However, after speaking with him for even a short period of time, I came to realize that this is a serious business for him.

Merrill grew up in Alaska, and after high school moved to the Portland area, where he started off by working in quality assurance for a tech company. His experience in tech got him interested in collaborative work environments and collaborative decision making. Currently, he and his startup partner Marcus are in the process of spending three months in the Nike+ accelerator.

It actually is kind of a misnomer to compare what KMikeyM is to a publicly traded entity. KMikeyM is actually a virtual trading system – Mike is not publicly traded on any stock exchange. What he has done is more similar to virtual currency like bitcoin than it is to being traded on the New York Stock Exchange.

In my interview with Mike Merrill aka KMikeyM, I asked him some questions to better understand what it meant to be a publicly traded person.

Q: How did this idea come about?

Merrill says that his idea to sell shares in himself came about after becoming involved in a local cooperative. The cooperative, unlike other organizations, are governed collectively. From his experience, corporate organizations made decisions much less efficiently than cooperative organizations.

Q: What types of decisions are people voting on and do you ever question the decisions that are made for you?

Throughout our interview Mike indicated that his “investors” were not out to see him fail. The crowd is interested in self-preservation and in all its wisdom tends, unsurprisingly, to make decent decisions, and maybe even good decisions. For example, Mike has never been asked to jump off a bridge because in that case, all of his investors would lose their money.

What impressed me was the level of trust that Mike has placed in the hands of the collective. There is no oversight in his model, no regulatory body looking over his shoulder. He has put himself out there and said, I trust you to make good decisions, and so far, he seems to think that the model is working. Mike says that when he got started, his investors were initially close friends – people he already knew and had close relationships with. He would already ask these people their opinion on different aspects of his life. I think it is a big jump to go from trusting a small circle to then making all of your life decisions according to the whims of the crowd.

Q: How many of your shares are traded on a daily basis?

If you visit Kmikeym.com you will find a graph of Merill’s trading history. Two interesting points about the graph are that there has definitely been an increase in the stock value since Mike started this project and secondly, that there has not been a lot of trading of the stock. Mike explains this by pointing out that the people who purchase the stock tend to be highly engaged in the investment. They will send him emails and will often respond to his requests for input.

Q: This lead me to ask Mike how he felt ceding control of his life and decisions to the collective.

Mike actually feels that the collective is an ideal form of “direct democracy.” In Mike’s model, everyone is an owner. Each investor has a personal stake in seeing him succeed. The people that are more engaged typically tend to invest more, thus having more influence on Mike’s decisions. Those who are the most excited about Mike’s project tend to invest the most.

Q: Do you have any plans on where to take this idea next?

Mike indicates that he would like to see this model of collective decision making replicated in other arenas. He says that the problem with many programs that are designed to facilitate collective decision making is that the decision-makers usually do not have any personal risk or reward and those whose decisions are being directed are not directly accountable to the decision-makers. In Mike’s model, investors have an incentive to optimize their decision making, and Mike has an incentive to follow the directions of his investors.

So what we have seen is that Mike Merrill has been able to build an effective decision-making cooperative that incentivizes investors to make better decisions, and holds him accountable to those investors. It will be interesting to see how Mike’s ideas progress in the future and to see if there are others who will adopt a similar model.

President Obama has proposed to loosen regulations on small businesses that wish to raise capital and specifically on crowdfunding through the “American Jobs Acts.” We have already seen the growth in crowdfunding initiatives over the past years, with businesses and even creative projects like movies receiving a tremendous amount of financial support from “investors” online. Mike’s model creates a more responsive and accountable model of crowdfunding that may become more common in the future.