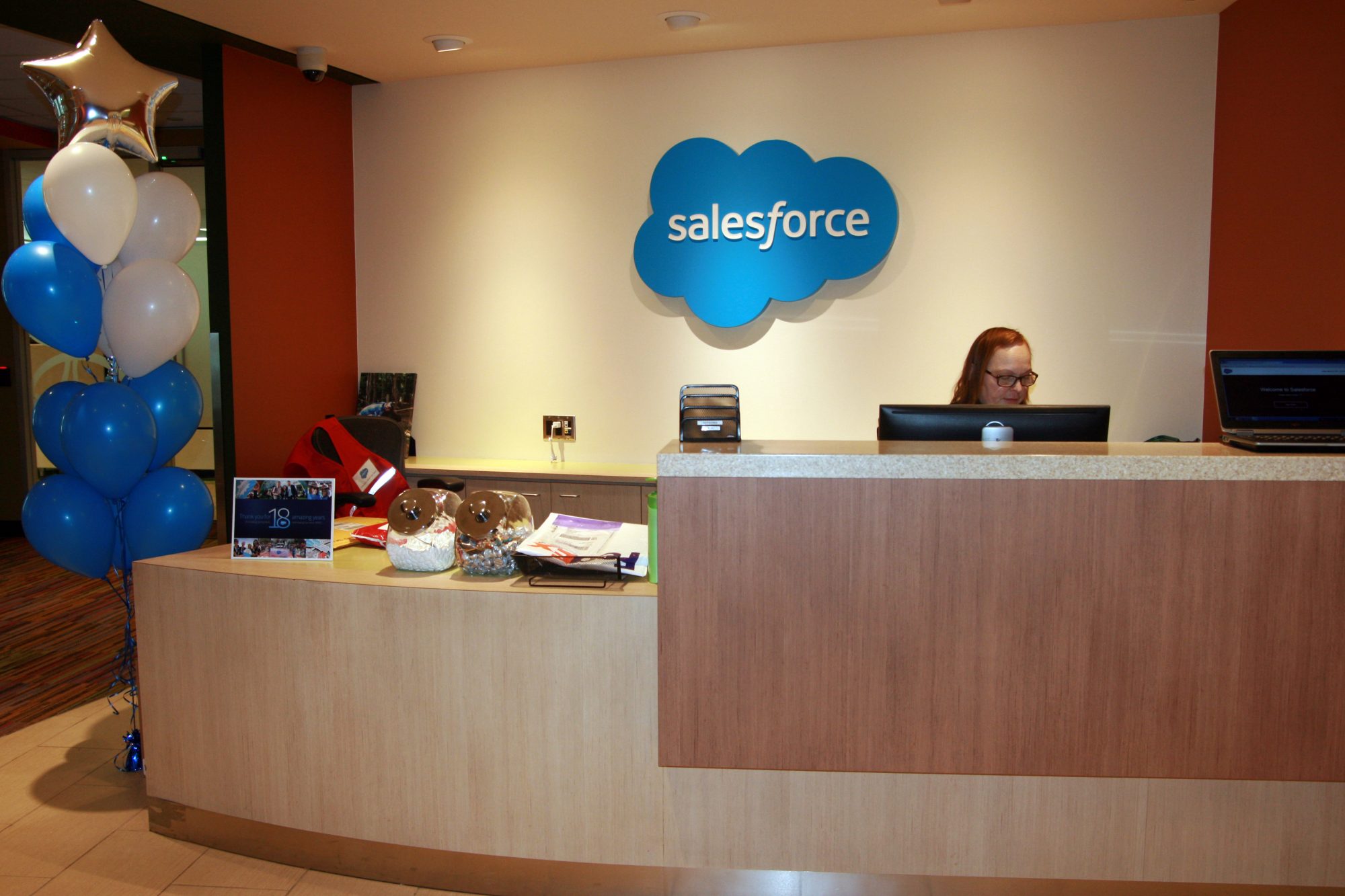 The Canadian arm of customer relations management (CRM) giant Salesforce.com recently invited ITBusiness.ca to visit its Toronto headquarters, which span five floors of a commercial building overlooking the city’s waterfront and welcome around 700 of the company’s 1000 Canadian employees every day. Come along with us. (In case you’re wondering, the balloons are to celebrate the company’s recent 18th anniversary.) 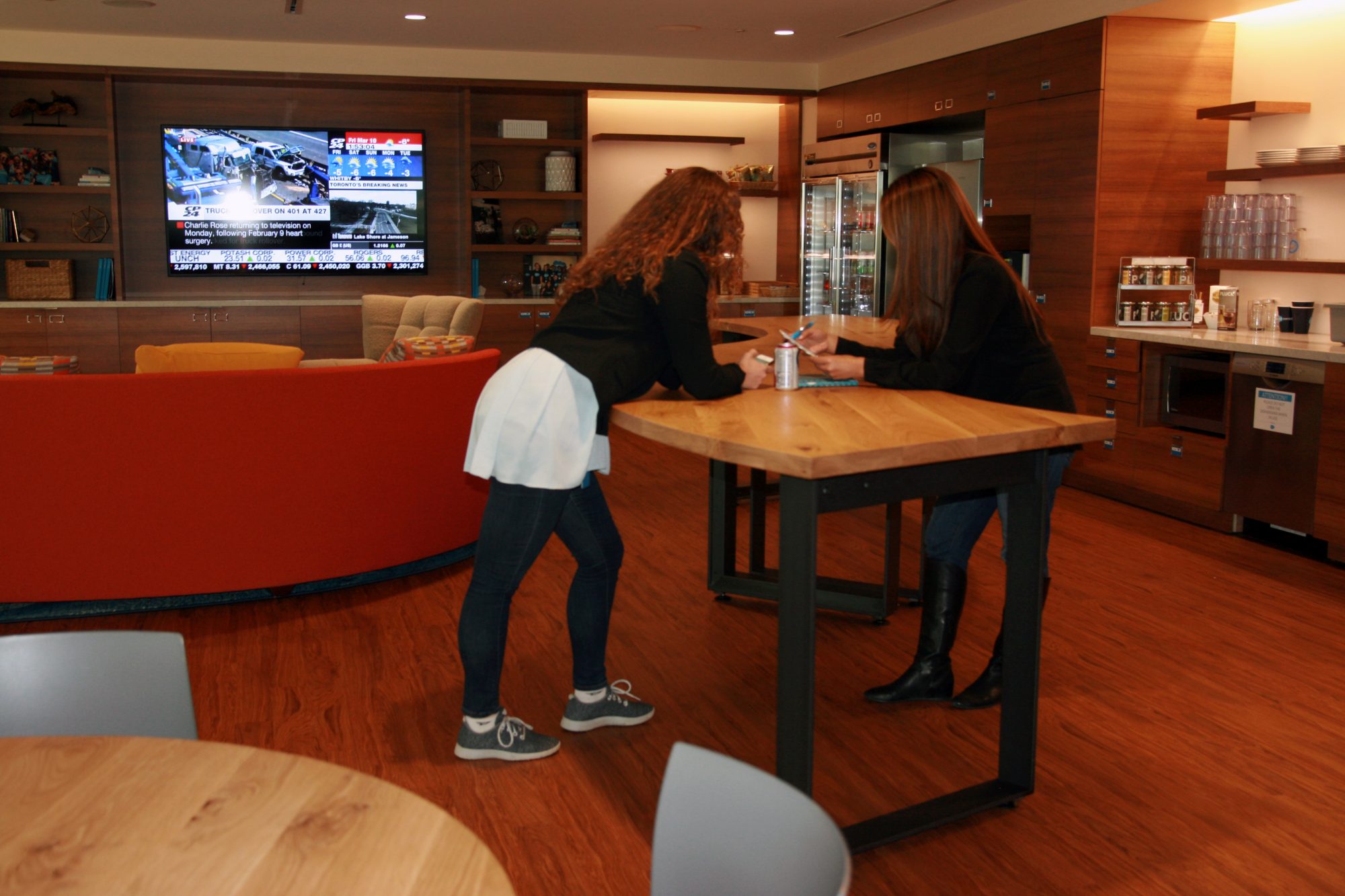 Our tour began at the company’s requisite well-stocked cafeteria, which in addition to providing the usual range of cereal, drinks, yogurt, cheese, hard-boiled eggs, and salty snacks, solicits suggestions from employees – leading, for example, to the availability of popcorn and vegetable chips, rather than Lay’s or Doritos. It must also be said that Salesforce’s cafeterias are better-furnished than most, with plush seating and big-screen TVs – and there’s one on every floor. 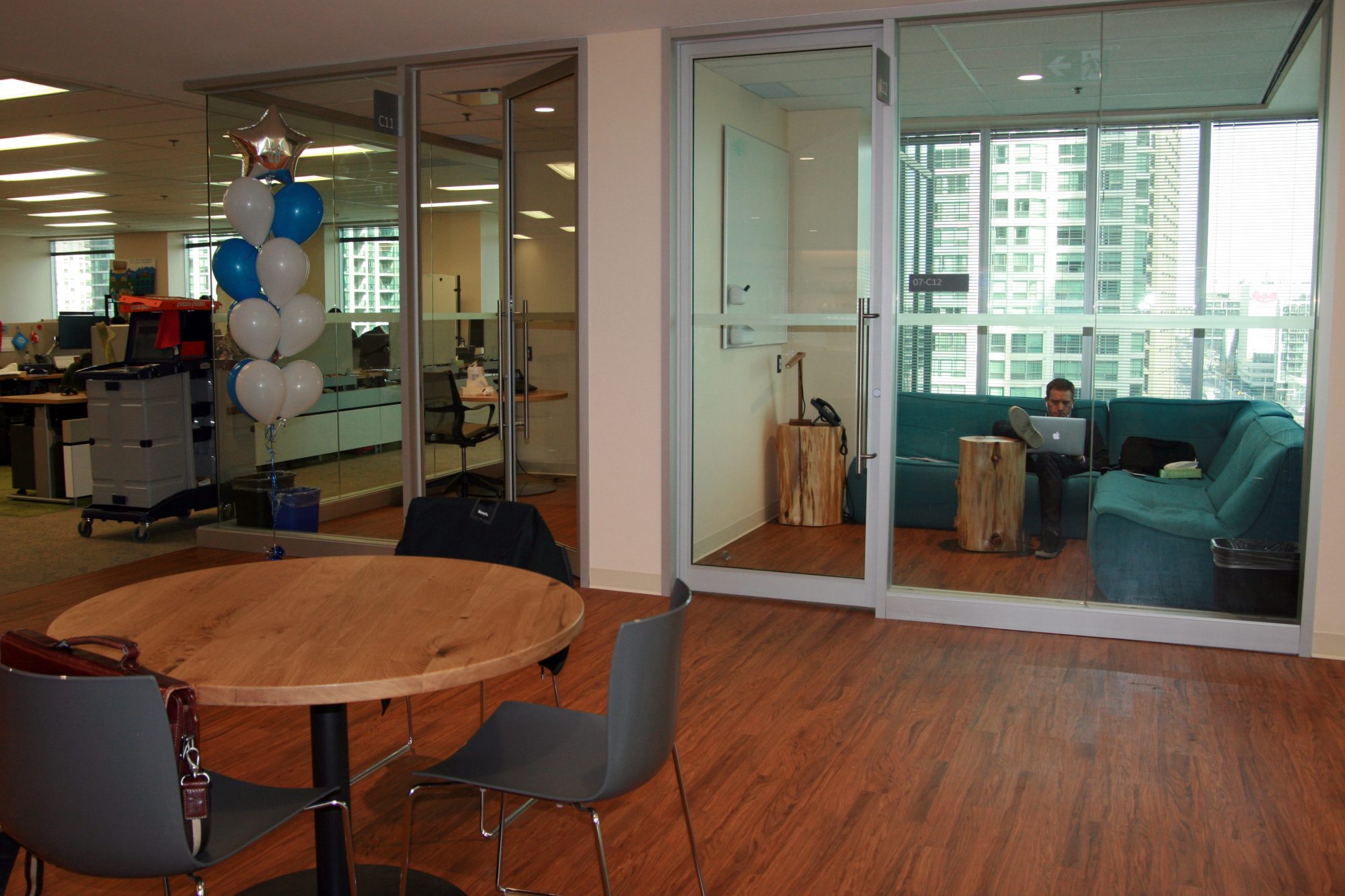 One of Salesforce’s guiding principles is the Hawaiian concept of ohana – family – and while it primarily manifests itself in the form of the company’s many employee groups, it also shows in its workplace layout, which encourages collaboration rather than separation both at desks and in its most private spaces. (Even Salesforce Canada CMO Tricia Gellman doesn’t have her own office!) 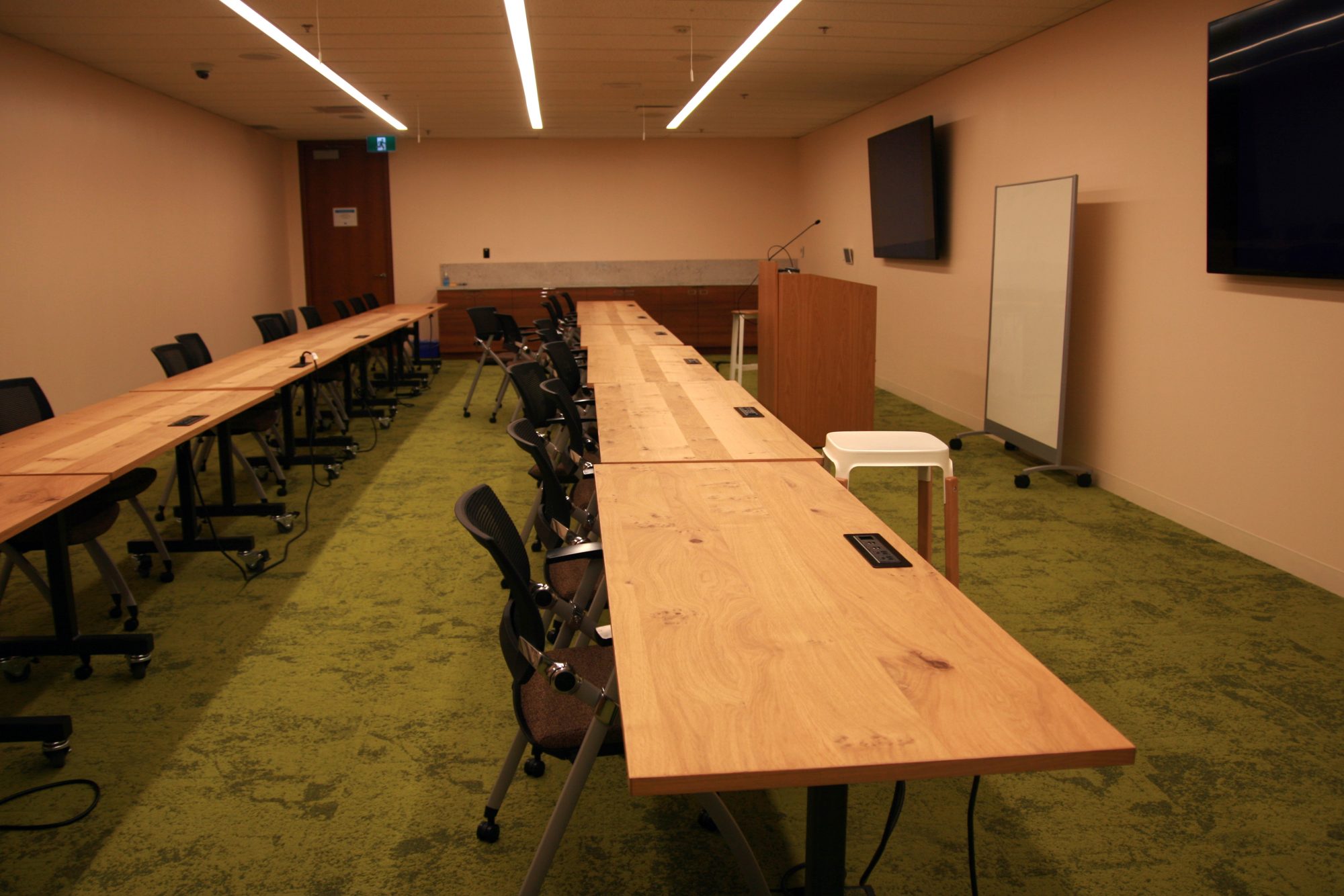 That written, long classroom-like presentation rooms remain available for teams that need them. Notice the company’s dedication to earth tones of green and brown. 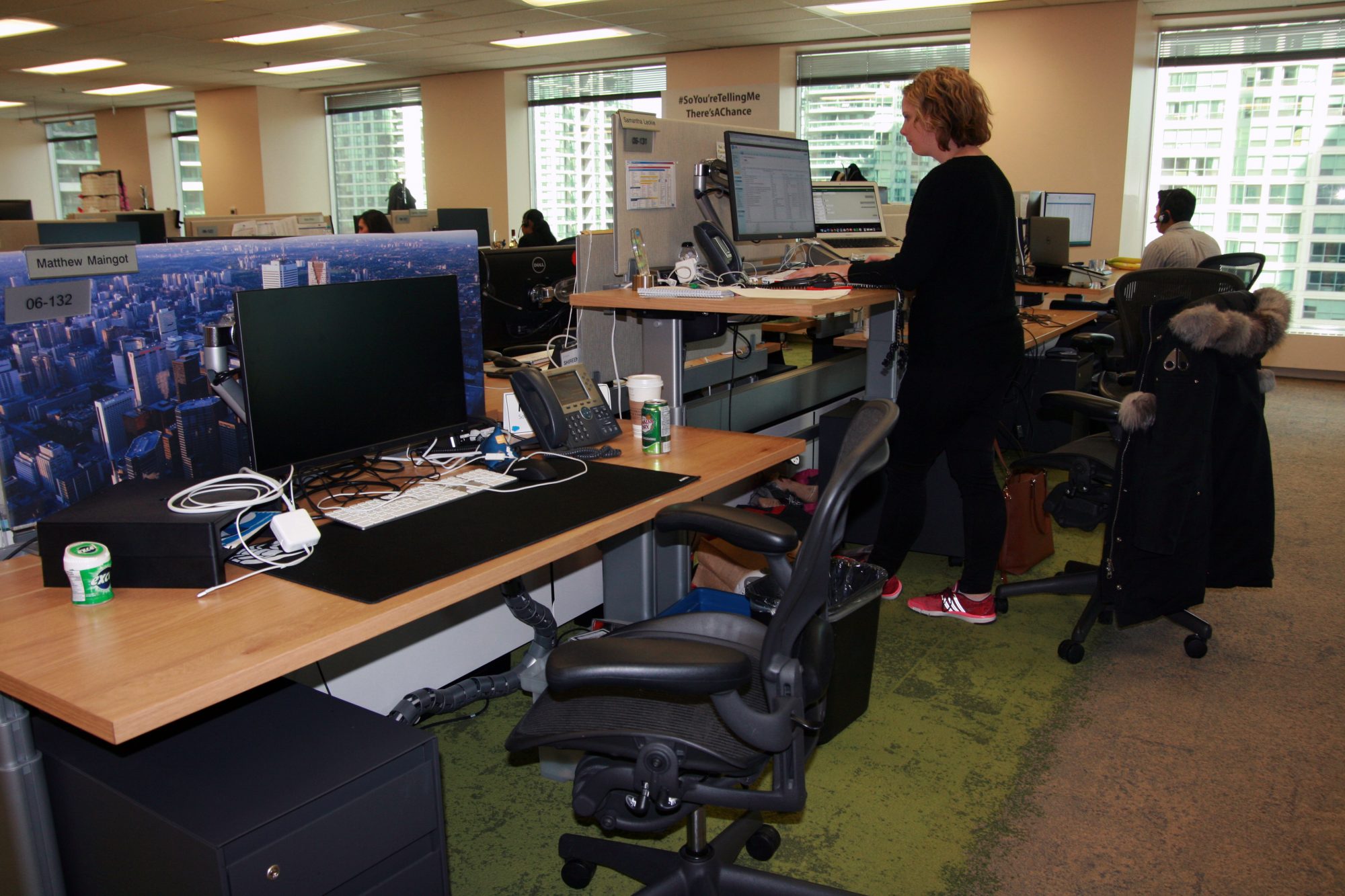 They might look like ordinary desks and office chairs, but these desks have buttons on the right side that allow them to be raised or lowered as needed, while employees can choose from one of five ergonomically designed chairs, with on-call experts available to help them decide which model is right for them. 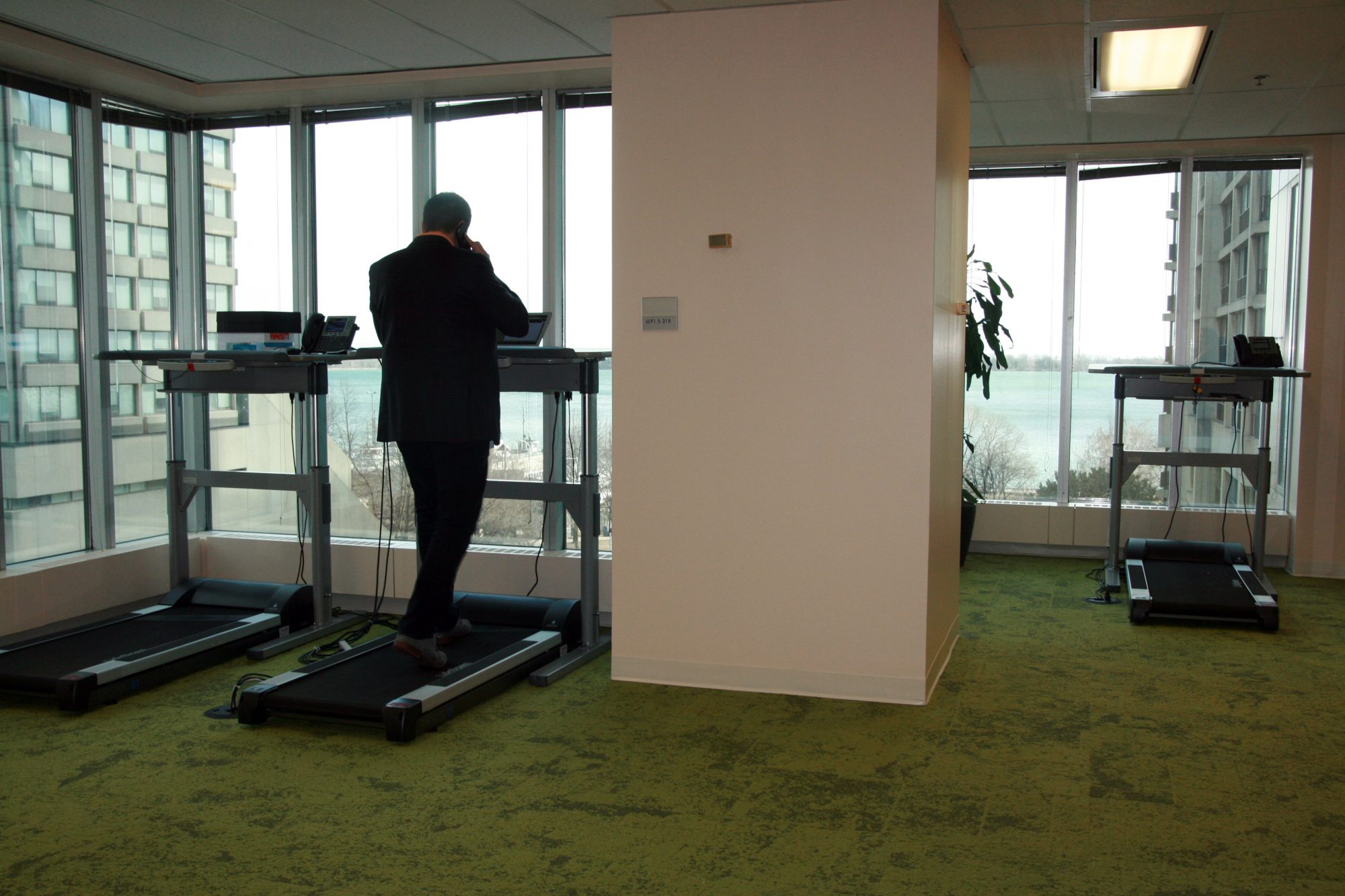 Another option for otherwise-sedentary employees – work treadmills, whose users are rewarded with fine views of Toronto’s waterfront. 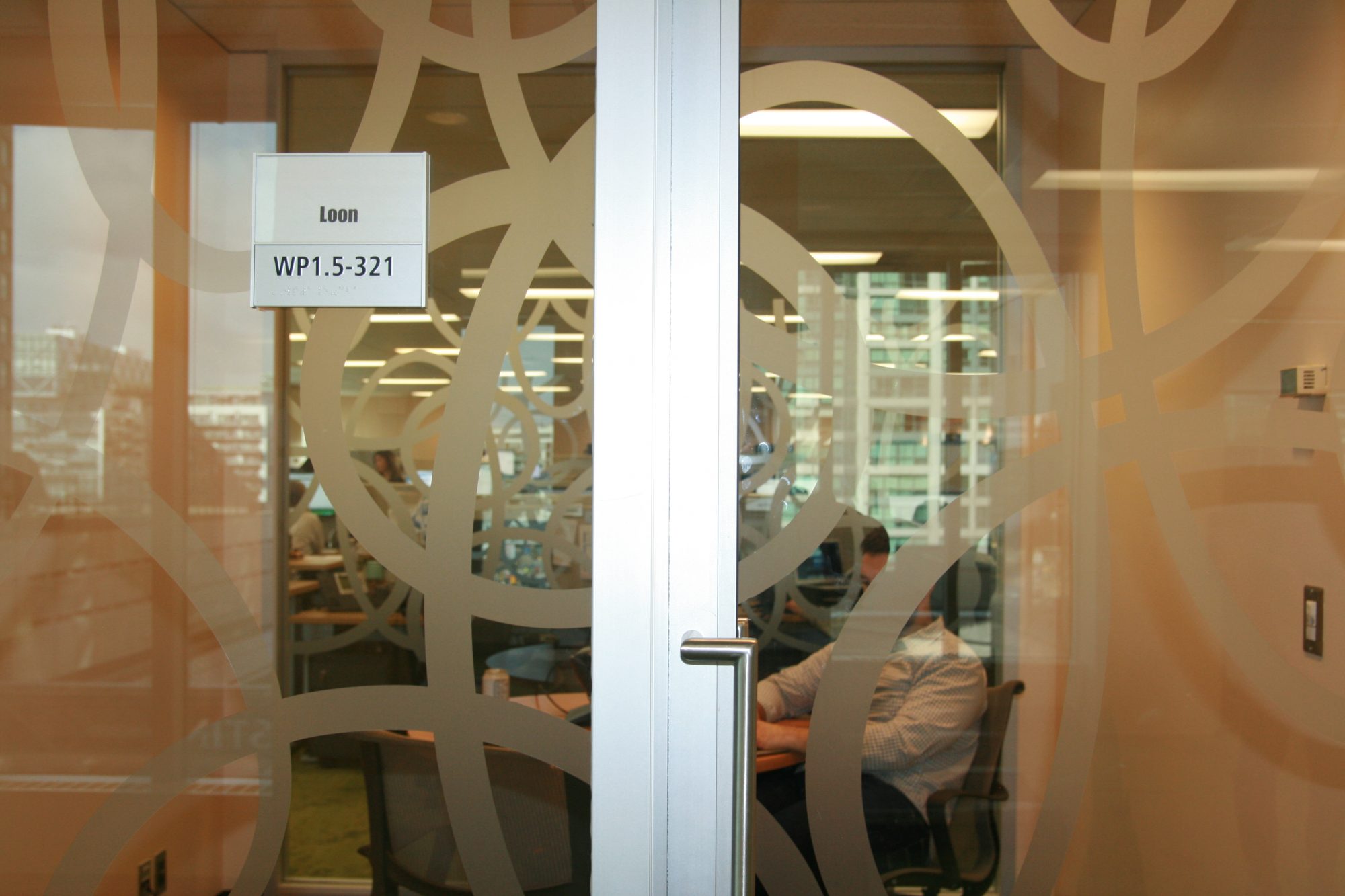 As you might guess, the “Loon” here doesn’t refer to the employee inside, but rather the meeting room in which he is making a call. Other uniquely Canadian room names around the office include “Gretzky,” “Trudeau,” “Northern Lights,” and “Bobcaygeon.” 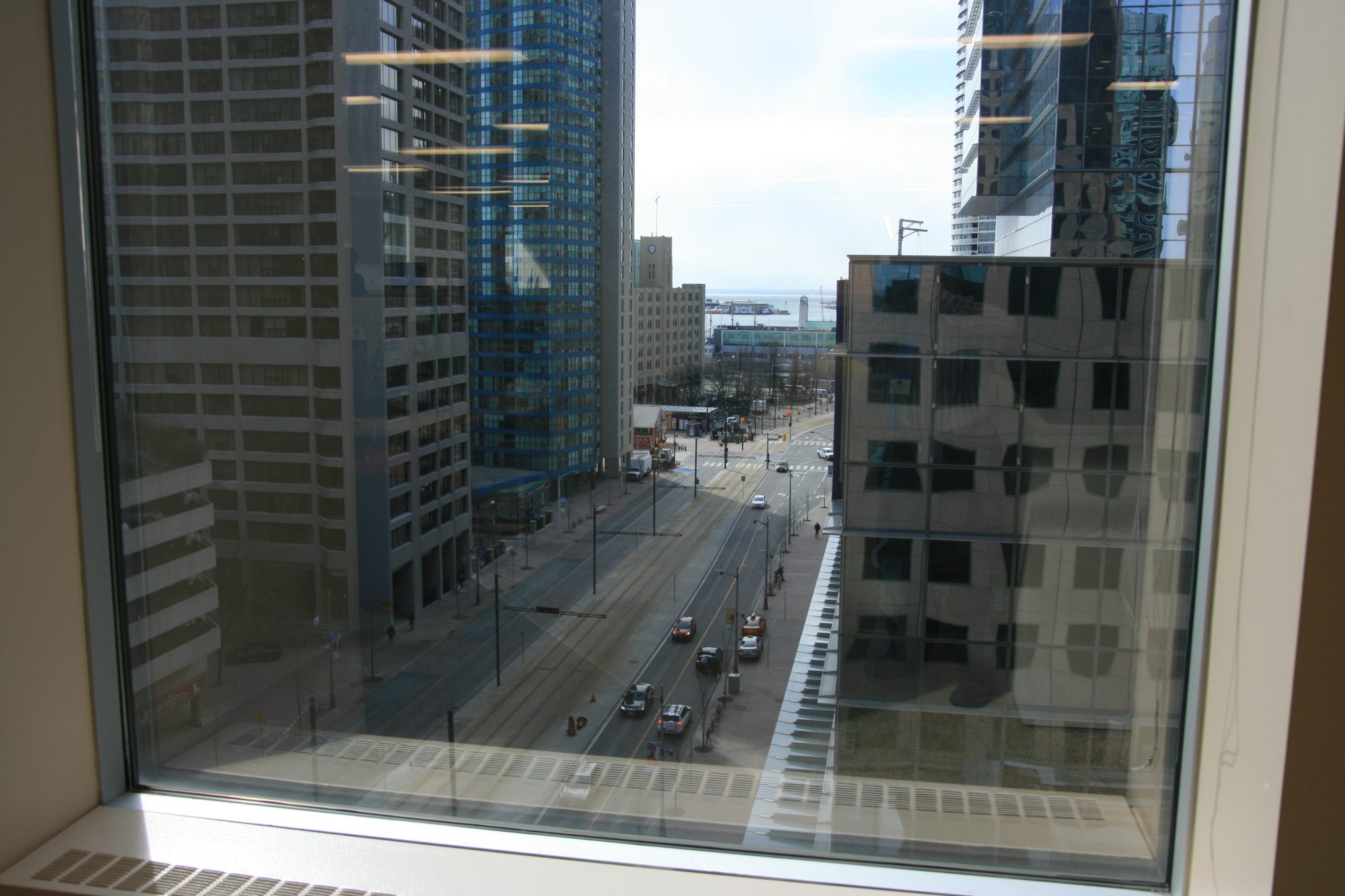 Does your office give its employees picture-perfect views of a building as stylish as Toronto’s Billy Bishop Airport? We’ll wager it doesn’t. (ITBusiness.ca parent company ITWC’s headquarters certainly don’t.) 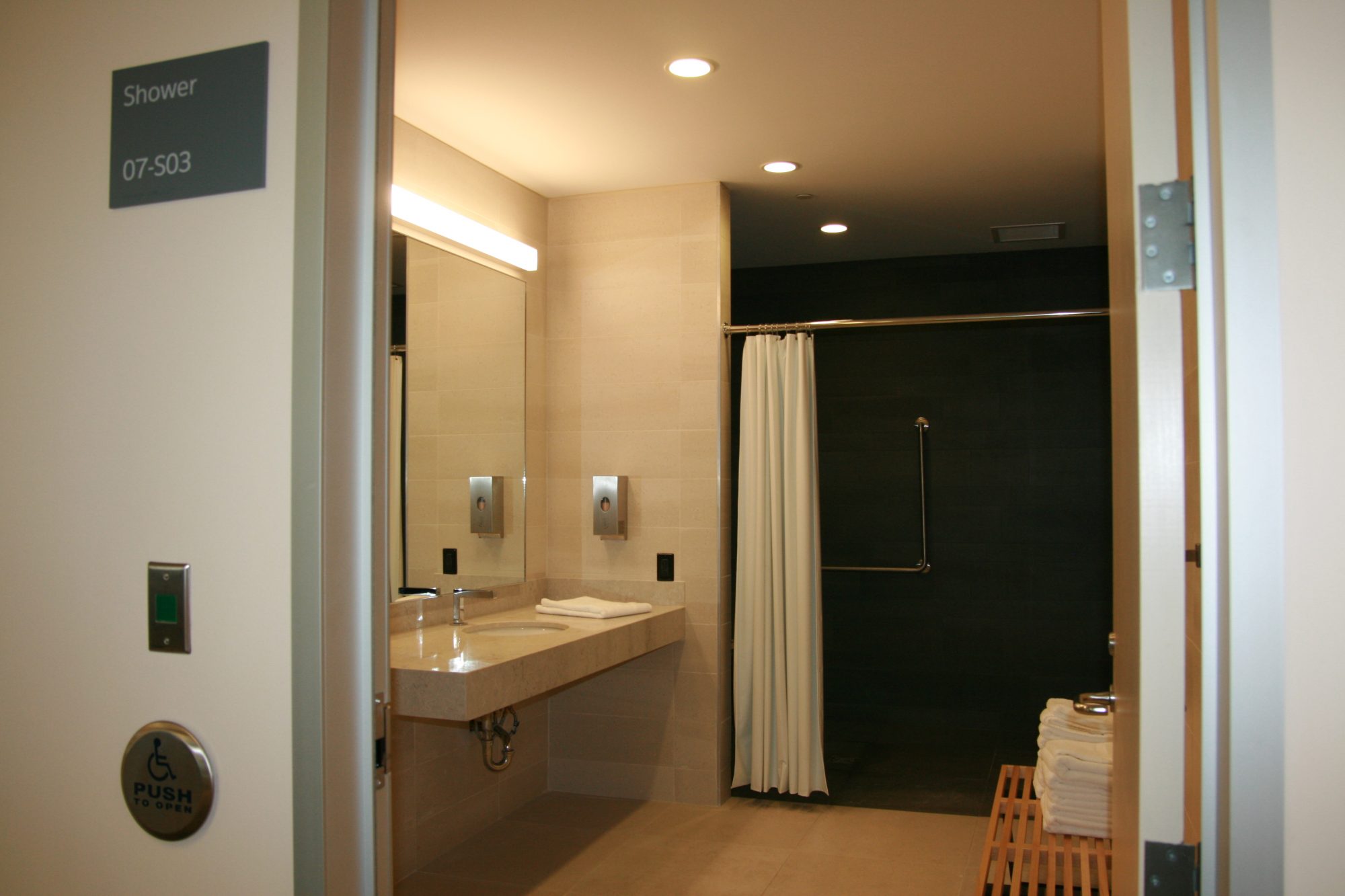 We’ll also wager your office doesn’t include a private shower, where employees who ride to work can refresh themselves before starting their day. Shampoo, conditioner, other toiletries, and even towels are all provided. 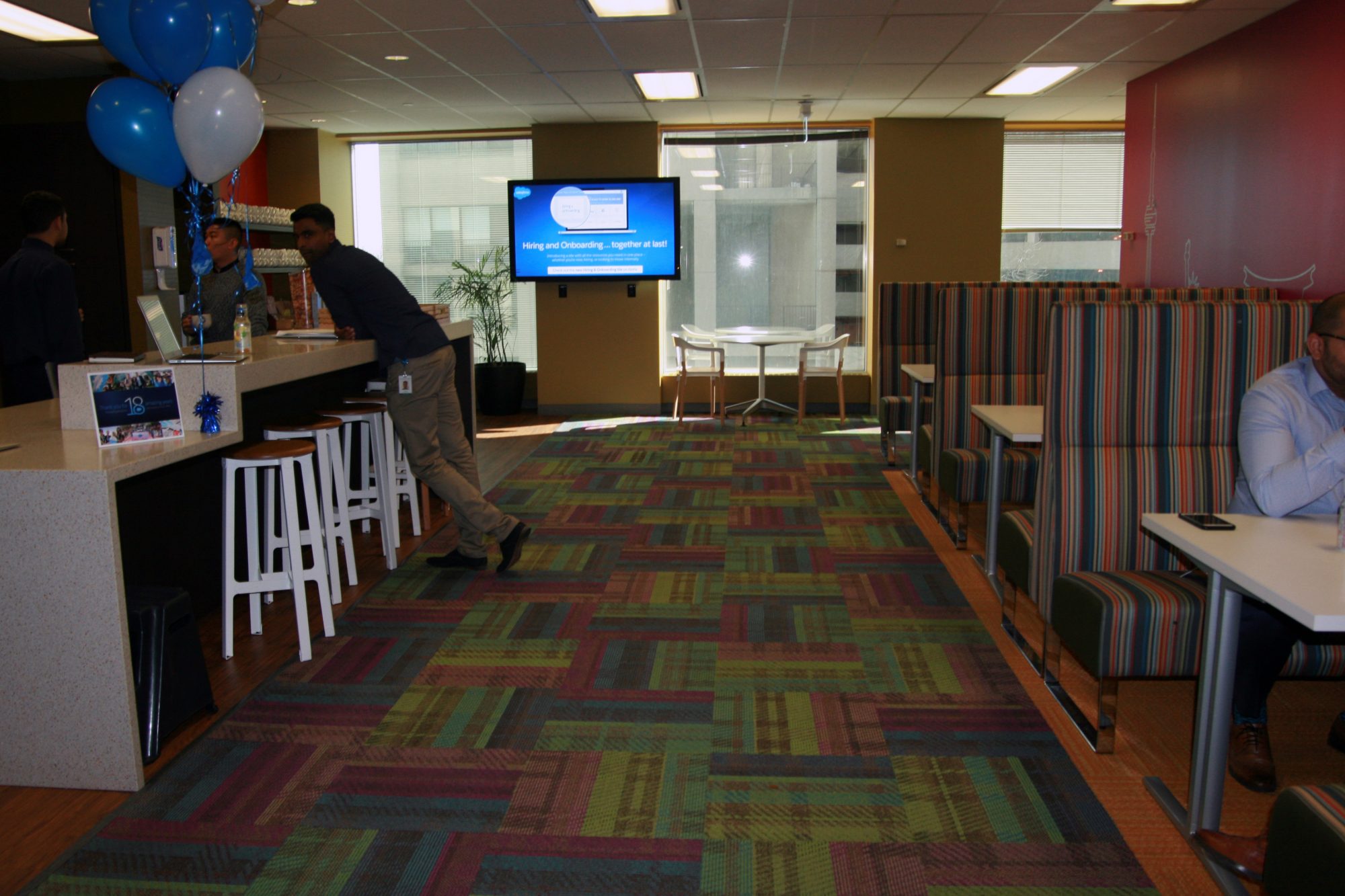 Salesforce’s Toronto headquarters are in the midst of a redesign, and so while three of the floors are refinished, two others remain decorated in the company’s former hipster restaurant-like style, complete with booths, hanging lamps, and patterned carpets. 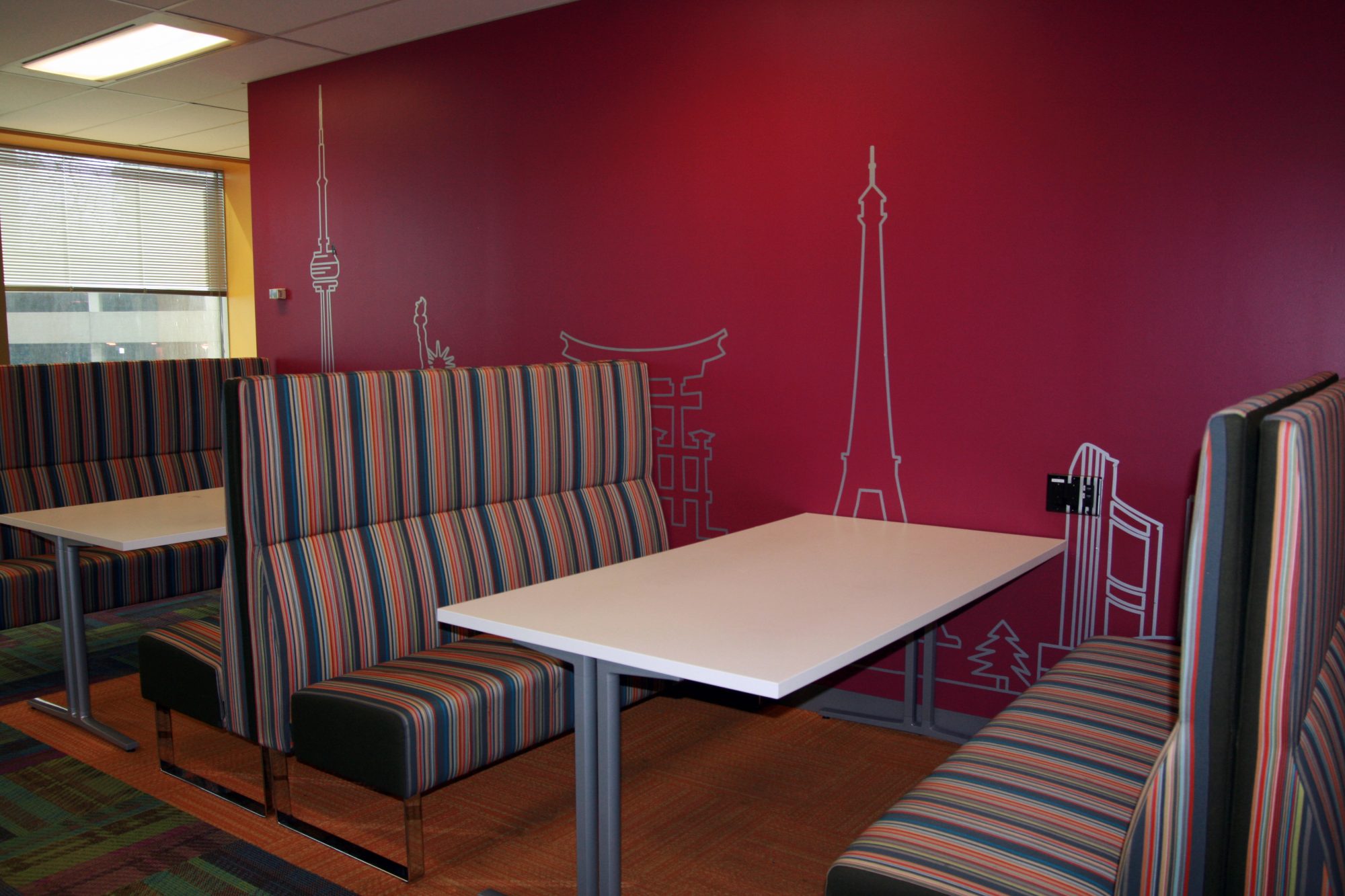 Personally, we appreciated several of the former style’s more idiosyncratic touches, such as this mural depicting Salesforce’s international locations in not only Toronto, but New York City, Shanghai, and Paris. 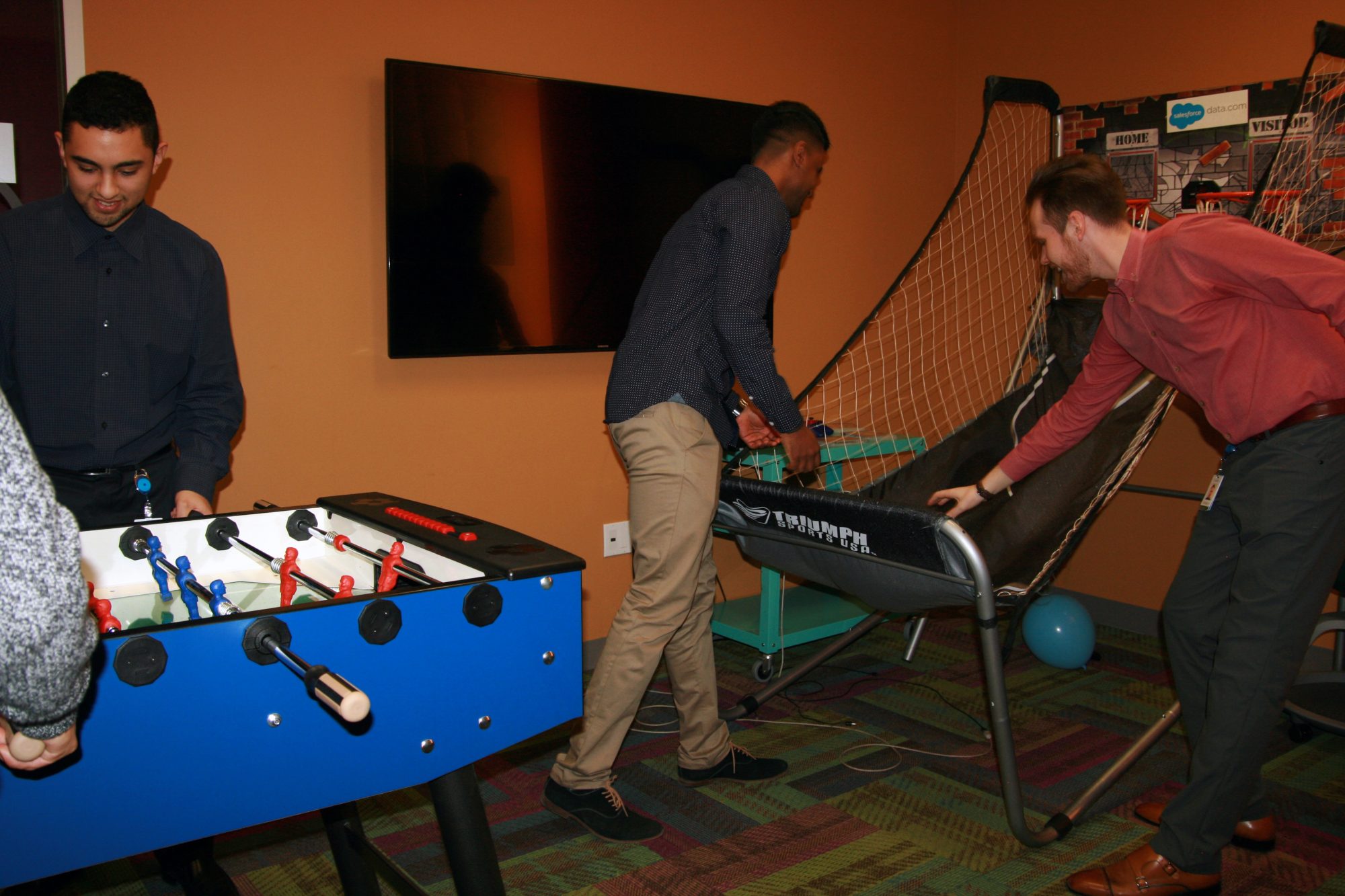 Like the cafeteria, few tech company offices are complete without a game room, with Salesforce offering a variety of activities divided by floor. Here on the seventh, users can enjoy a PS3, foosball table, or basketball net, while other floors include a Nintendo Wii, X-Box Kinect, and ping-pong table. 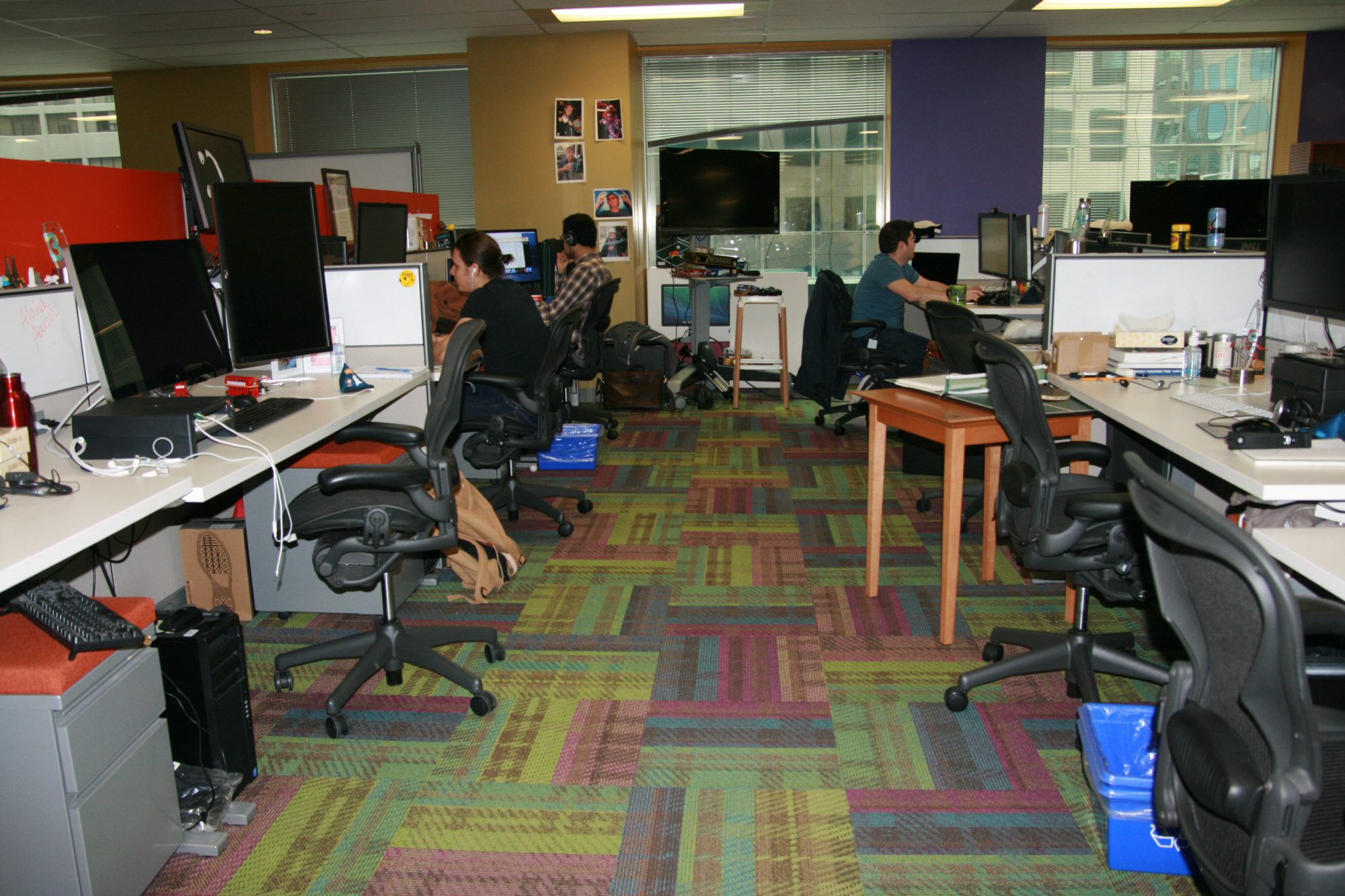 Here you get an idea of what the company’s former workstations looked like. The desks can still be adjusted, though they’re not as ostentatious about it – instead of the button proudly being in the open, users need to look for it underneath the right-hand corner. 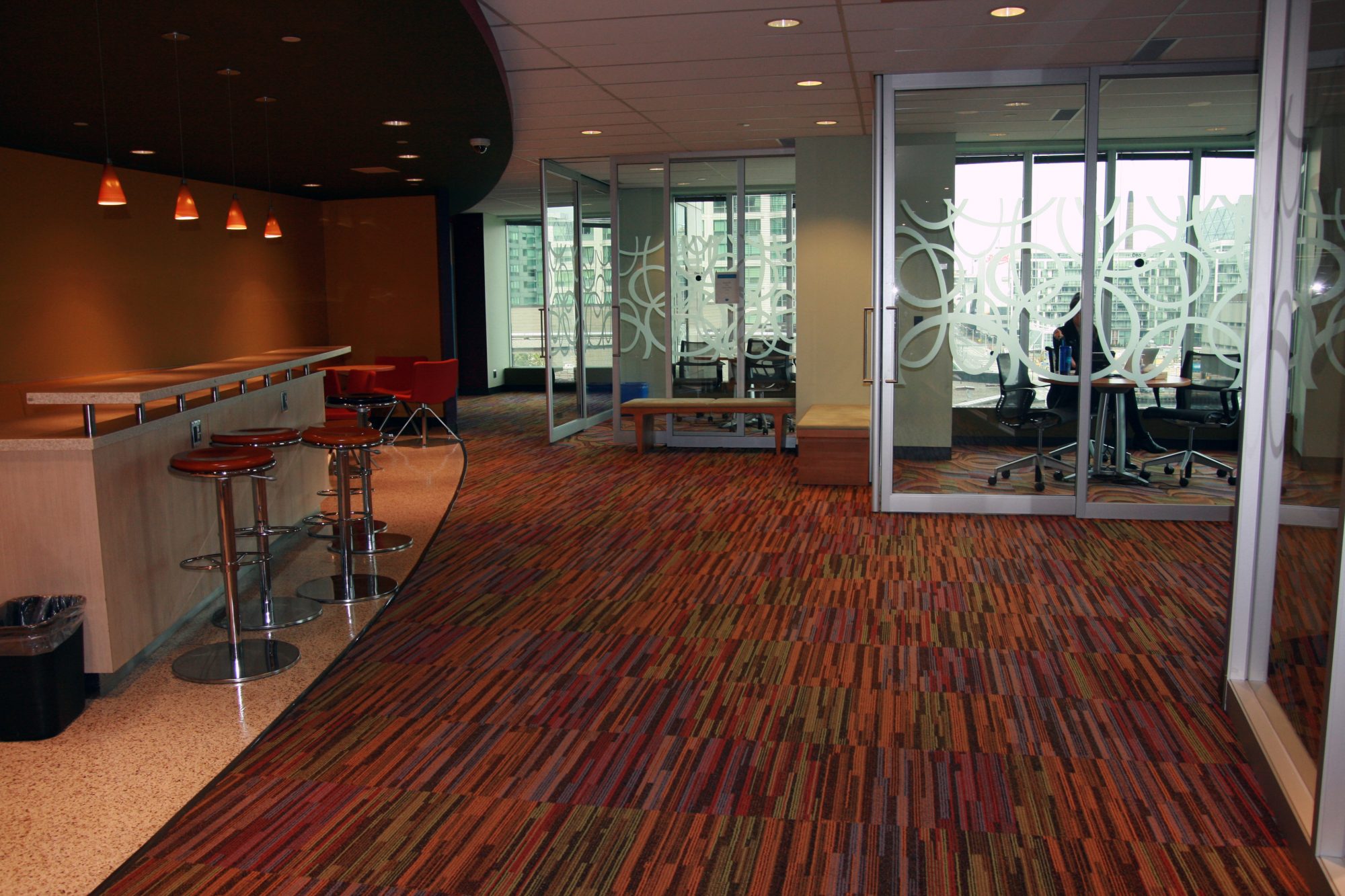 Salesforce’s old-school, so to speak, offices and cafeteria on the fourth floor are a little more cleanly divided than their updated counterparts, and a smidgen less comfortable-looking, though no less inviting to visitors such as tech journalists ending their tours.

SUBSCRIBE
Previous article
“I could be successful in any field I chose.” – advice from 23 women in tech
Next article
Inside House of VR, ‘Toronto’s first virtual reality lounge and event space’

2014’s Top 10 smartphones for business: From Apple to Xperia Z

Check out Microsoft and Steelcase’s creative workspace in downtown Toronto