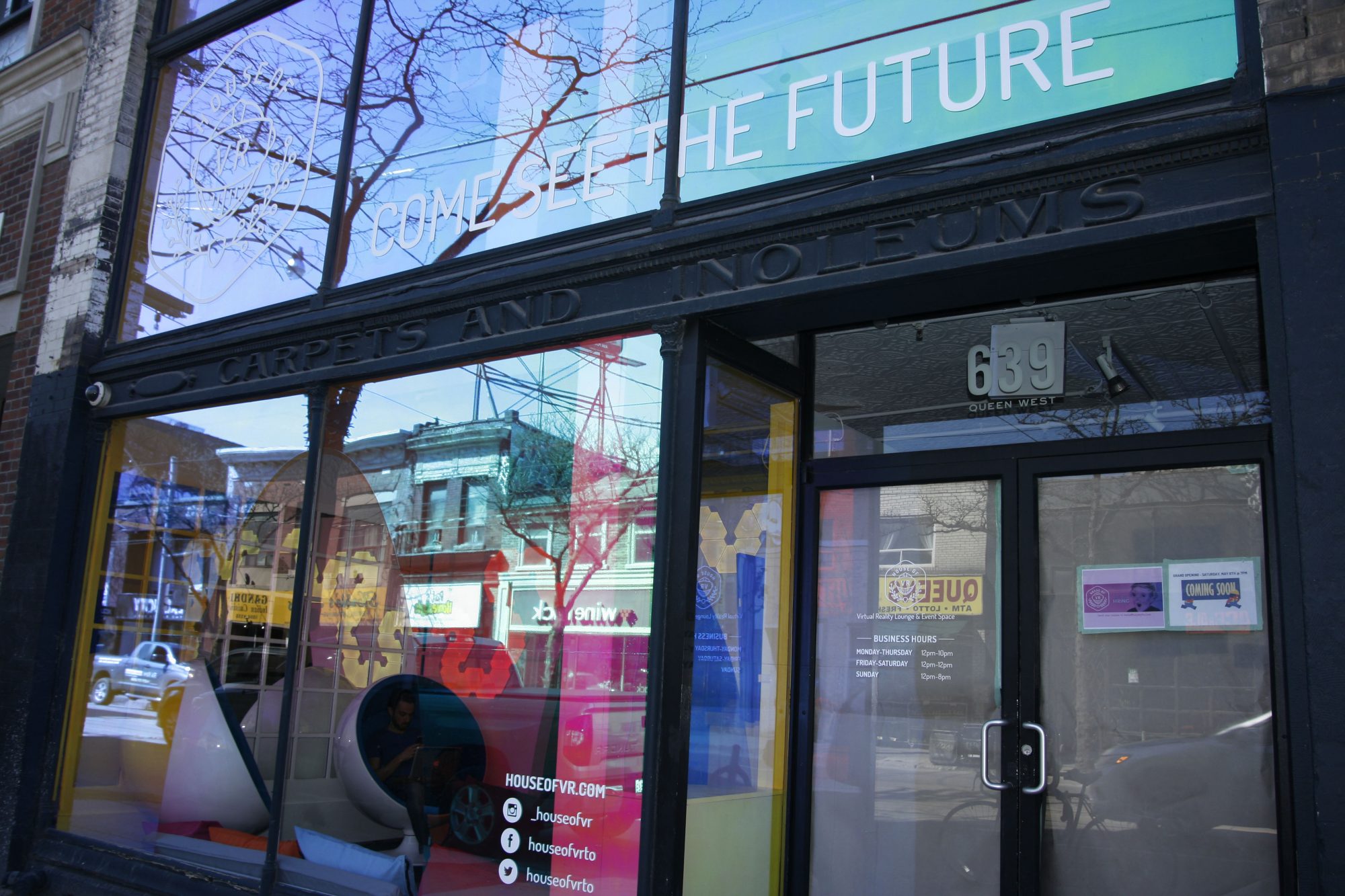 TORONTO – It’s already being used in the construction, mining, and medical industries – not to mention arcades – but can virtual reality (VR) serve as the centrepiece of an evening out?

Ahead of his new venture’s opening Brotman, whose most notable previous success was the non-profit travel organization Operation Groundswell, invited ITBusiness.ca for a visit. Join us for the tour. 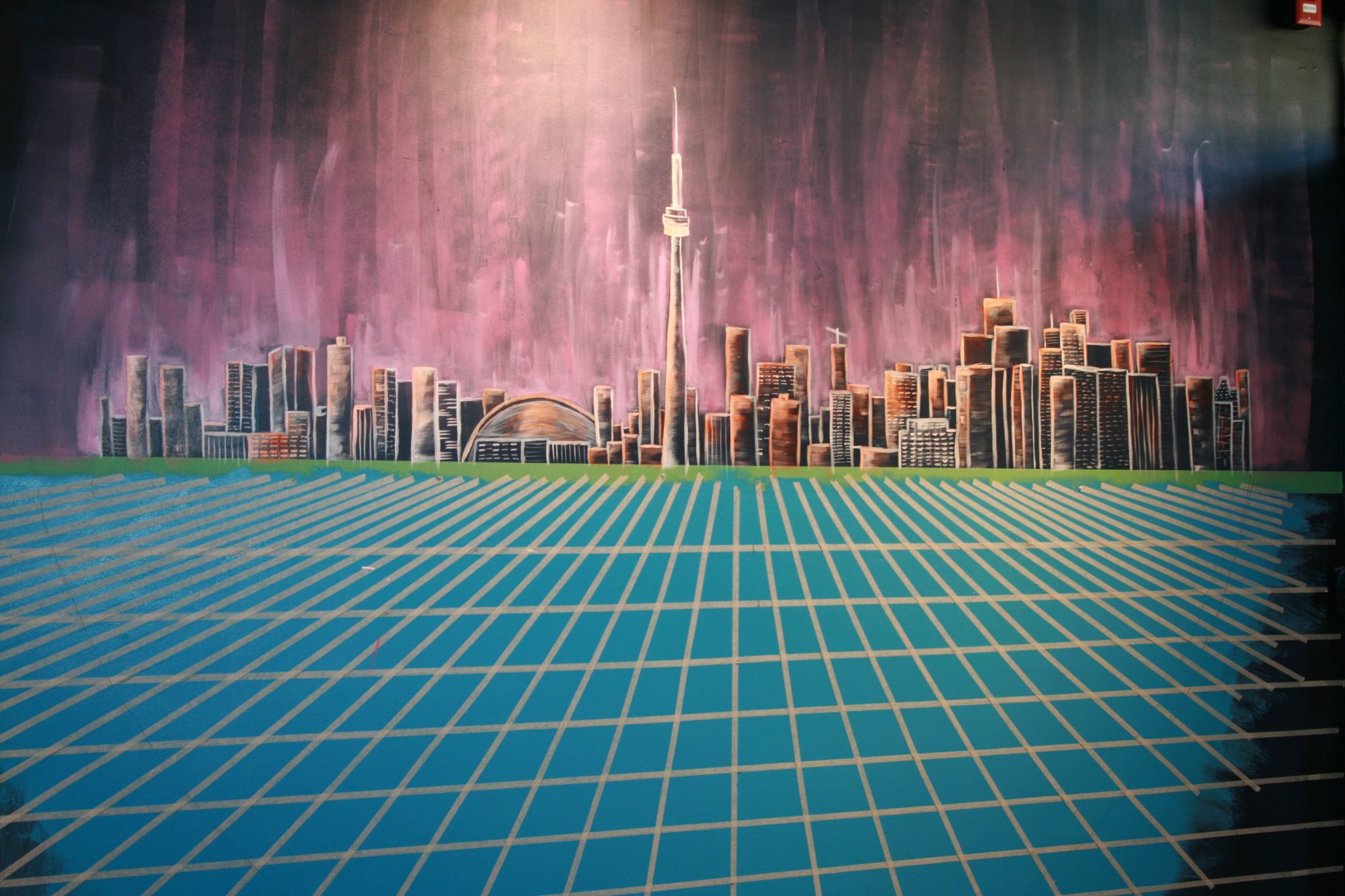 Though Brotman is the first to acknowledge that House of VR isn’t based on an original idea – he’d visited similar venues in New York City and Vancouver – it would be difficult for any Toronto resident to dispute his reason for running with it.

“Toronto is a cool city, but we’re never the first at anything,” he says. “However, because of our diversity, I think we remix things well – culture, art, and in this case virtual reality arcades.”

“We thought, ‘Let’s make a visually stunning space where the general public will want to hang out, have a beer, and try this new tech,'” he says, while showing off this mural at the entrance (which, artist Steph Payne is quick to note, is unfinished). 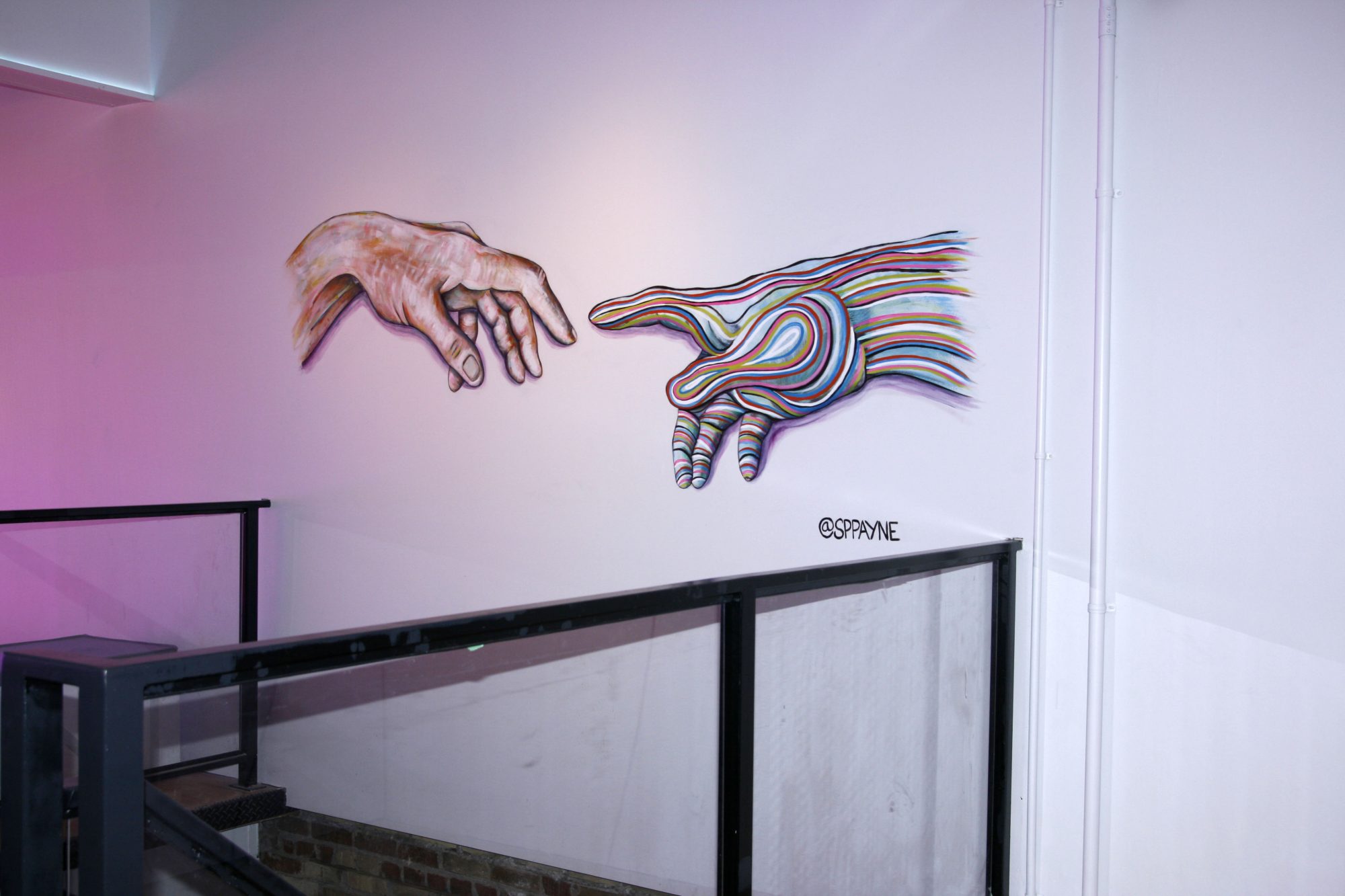 Payne, who serves as House of VR’s creative director, also created this riff on Michelangelo’s The Creation of Adam, a near-touch between a human hand and a digital one that greets visitors as they make their way up to House of VR’s second floor.

The goal, Brotman explains, was to build a venue where visitors would be inspired to shoot pictures of themselves and upload them to Instagram. 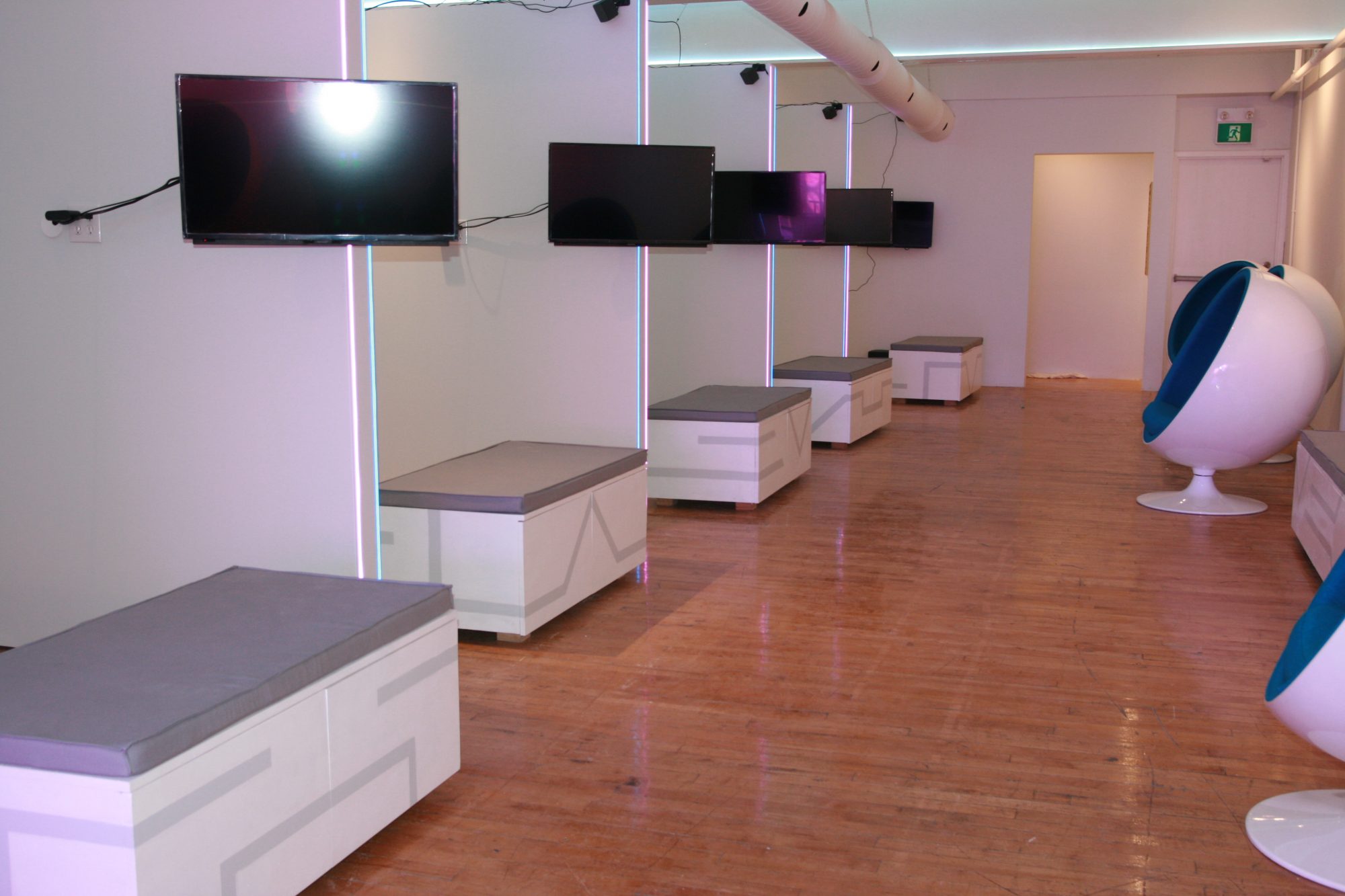 When House of VR refers to itself as a “VR Lounge,” this is one of the two main areas it’s referring to. The venue’s second floor boasts eight virtual reality units, each of them accompanied by a couch, television screen where friends can watch whatever the main viewer is experiencing, and a 360-degree pod seat ideal for visitors interested in renting a Samsung Gear VR unit for $20 per hour ($12.50 for the half) and watching 360-degree videos.

The company recommends that visitors bring friends; each VR unit costs $55 per hour to rent, and can be shared by groups of up to four. 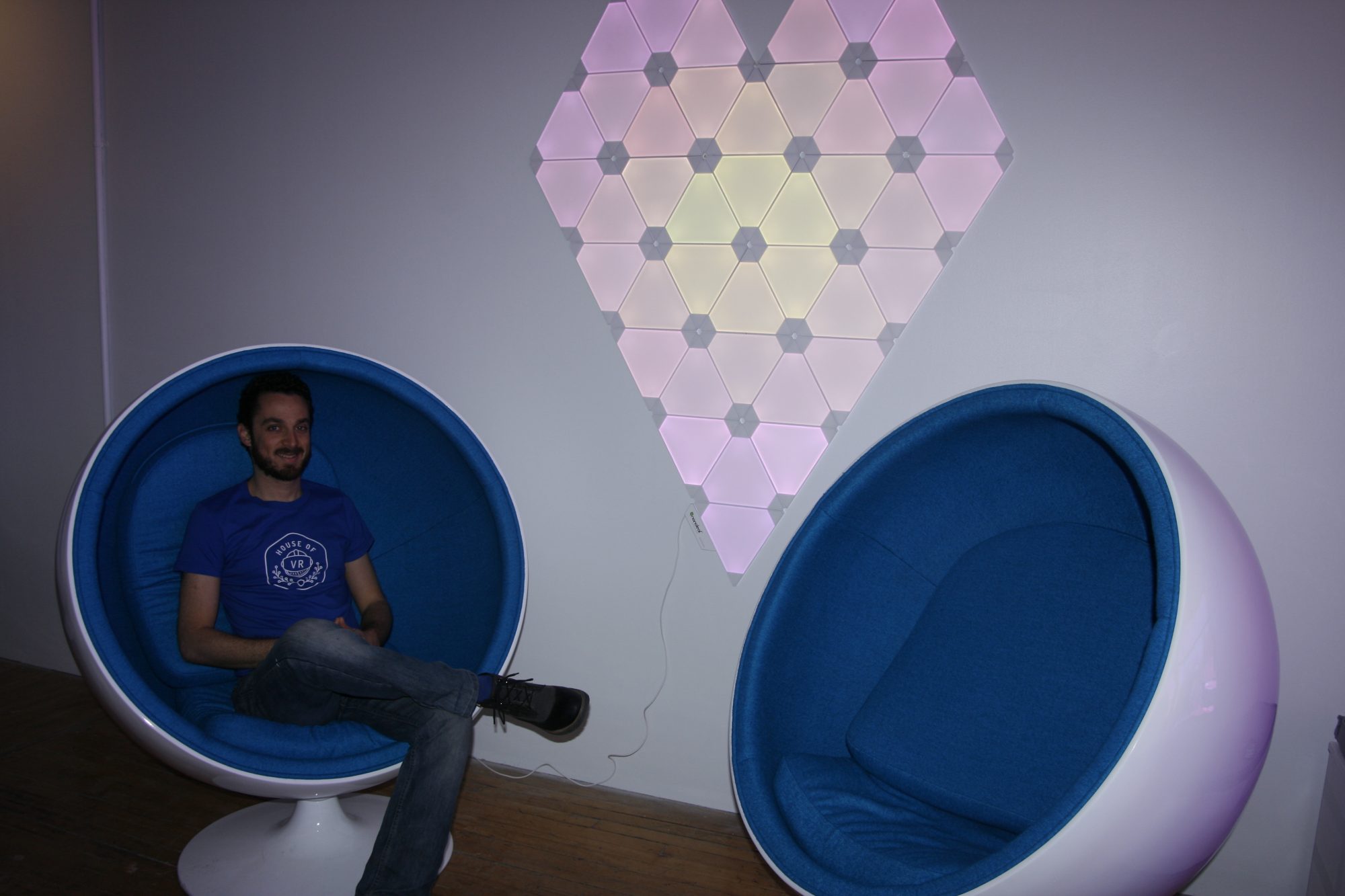 Of all the decorations at House of VR, Brotman (left) believes that this LED installation, made from modular Aurora panels designed by Toronto lighting startup Nanoleaf, has been the most popular on Instagram so far.

The panels are available in packs of nine, and can be connected with each other so that plugging in a single unit will illuminate the set. They constantly change colour too, with Brotman using his smartphone to manipulate the palette during ITBusiness.ca’s visit.

“We wanted to showcase Toronto artists and Toronto startups, so we’re really happy with Nanoleaf,” he says. 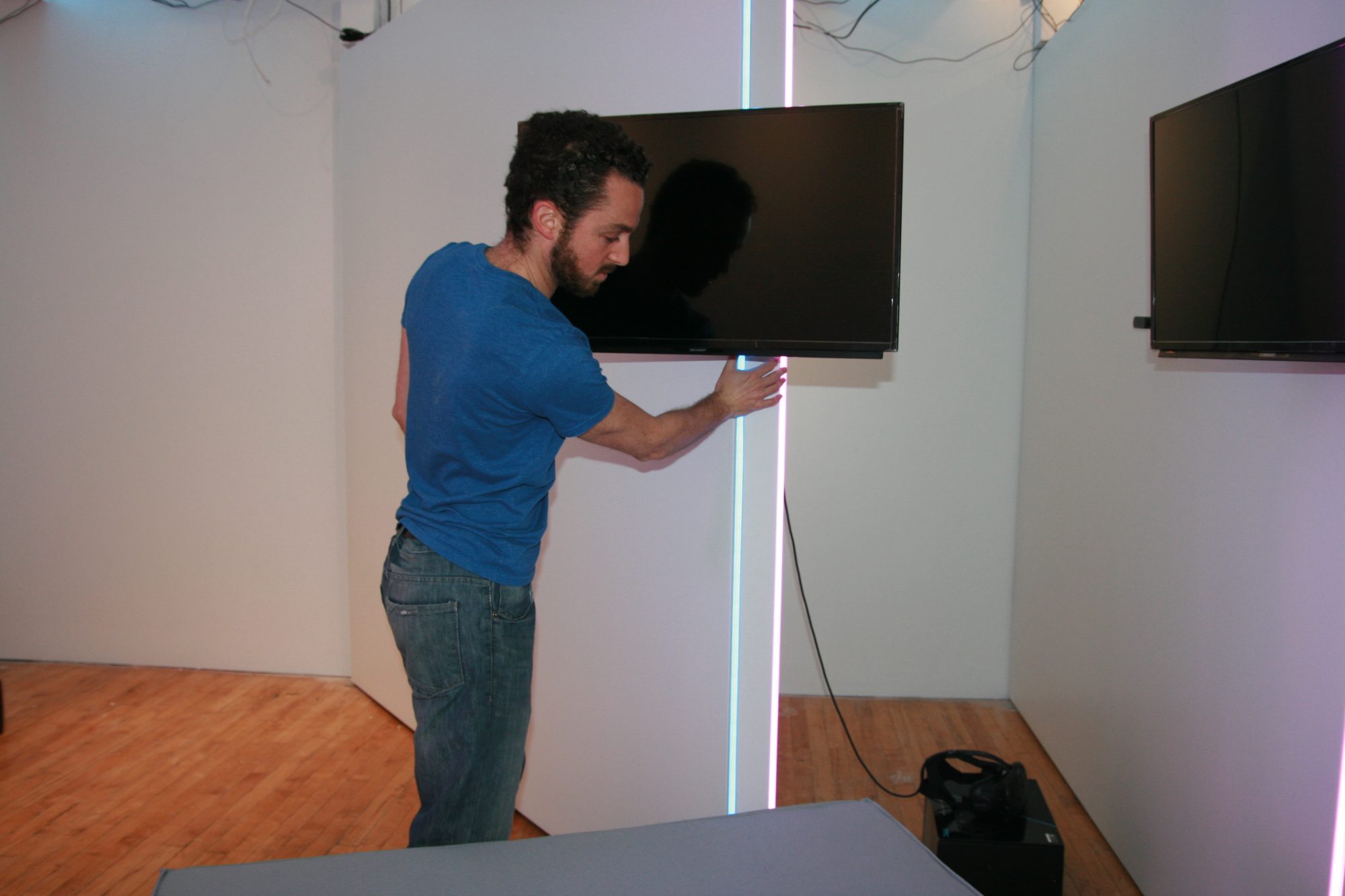 As for the “event space” part of the equation, Brotman emphasizes House of VR’s modular design, and during our visit demonstrates how easily the walls can be moved to convert the area into a conference room.

“We’ve been getting requests for event bookings that range from brand activations, to live music events, to conferences, to workshops,” he says. “I don’t think there are enough cool spaces in the city to showcase events or products at the intersection of tech and culture, so we want to be a central hub for that.” 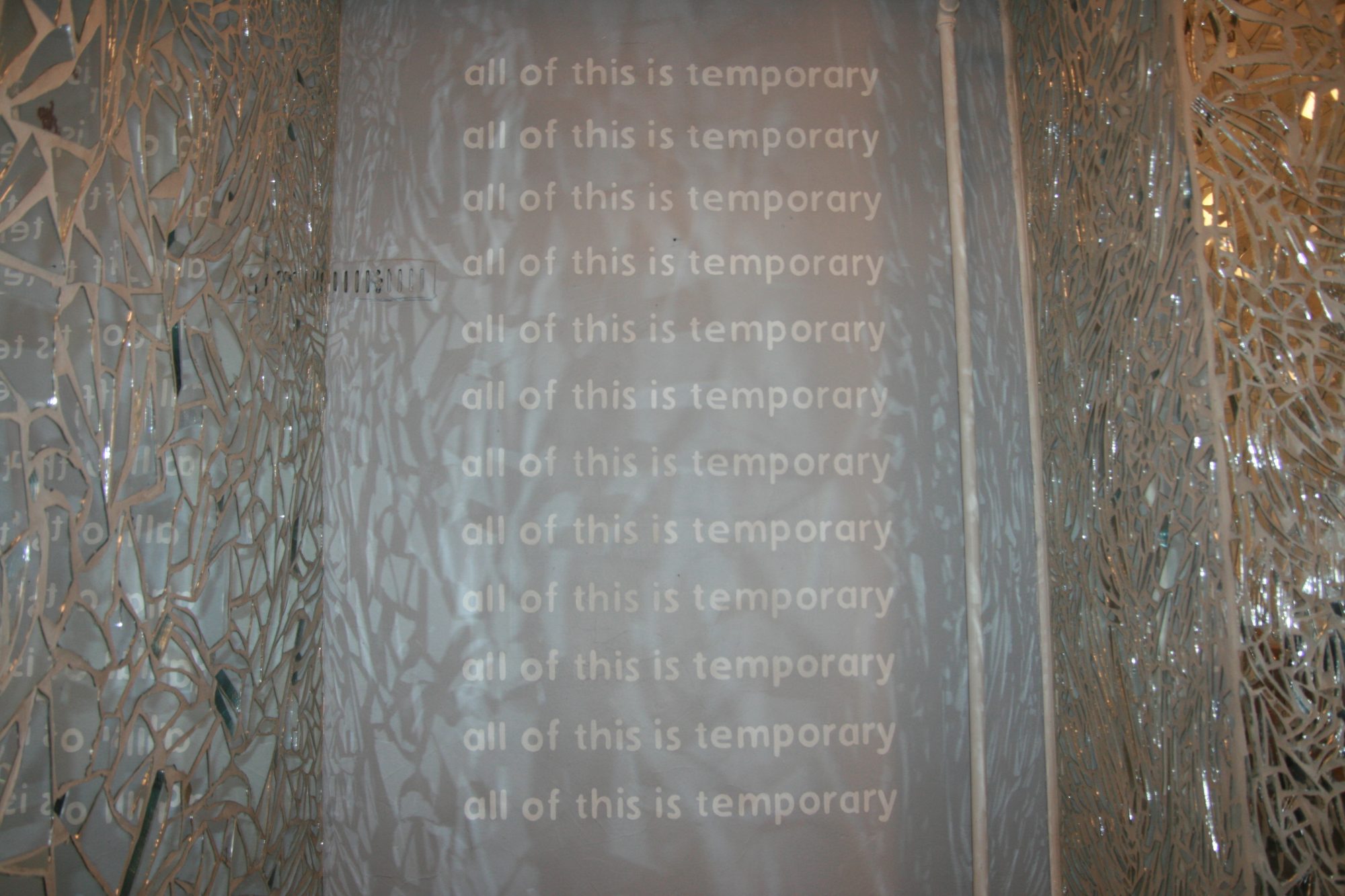 We can’t recall the last time we saw a bathroom that doubled as a miniature art museum, but next time we’re challenged to do so House of VR will be high on our list.

To convert the space into a work of art, creative director Payne ordered dozens of mirrors from Bunz, broke them, and grouted them. 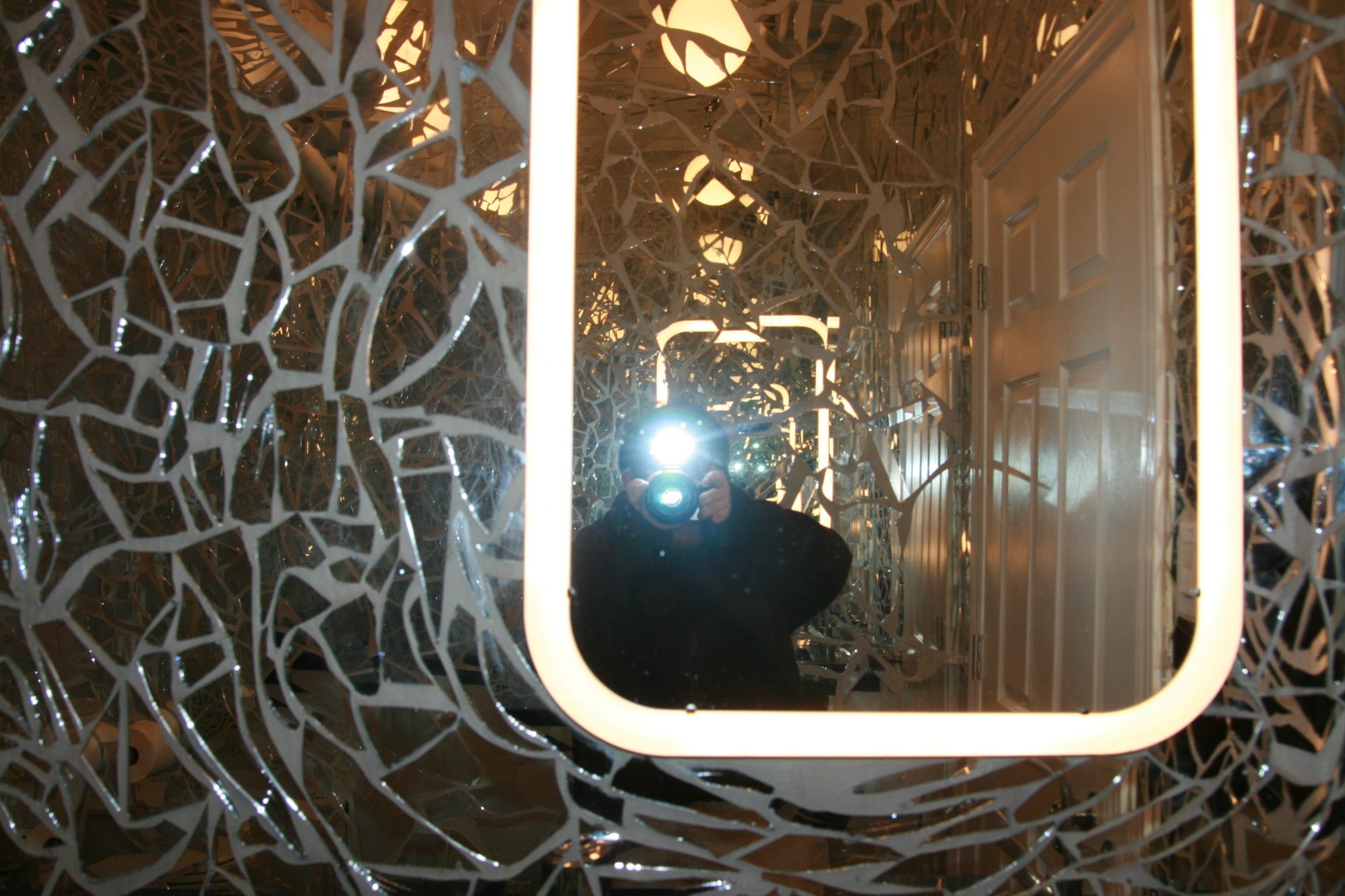 Brotman also notes, with some pride, that Payne contributed a carnival-style room to the farewell party of Toronto institution Honest Ed’s.

“It was really interesting to see how many people would walk into a space and just take a photo and then immediately share it to social media,” he says. “So we figured we’d design our space with that in mind.” 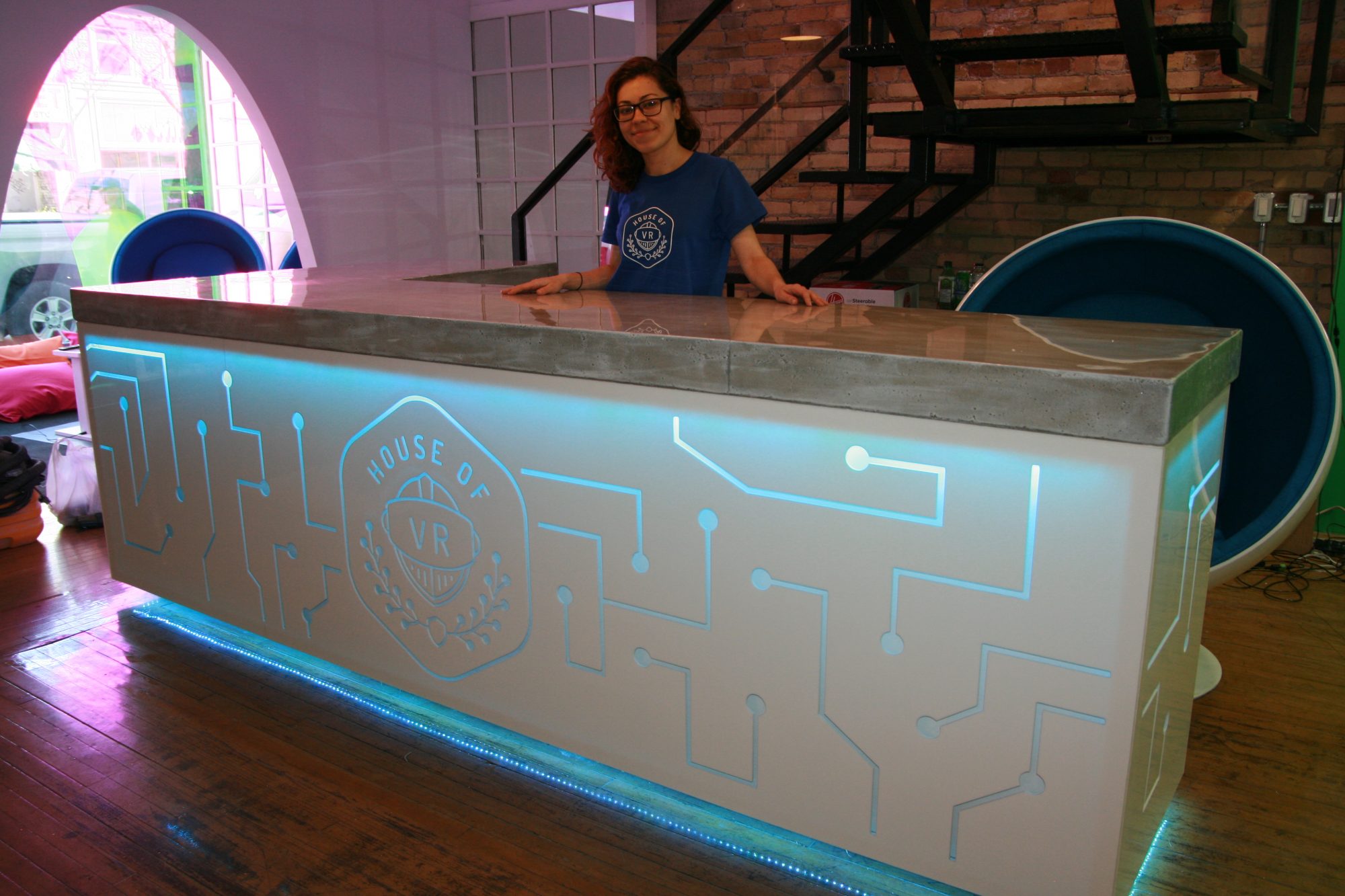 Downstairs, creative director Payne herself greets us at House of VR’s front desk, where in the near future the venue intends to live up to the “lounge” part of its name by serving wine and beer in addition to the usual non-alcoholic beverages.

Snacks, however, are another story – Brotman admits to worrying about visitors getting sticky fingers on the VR equipment. 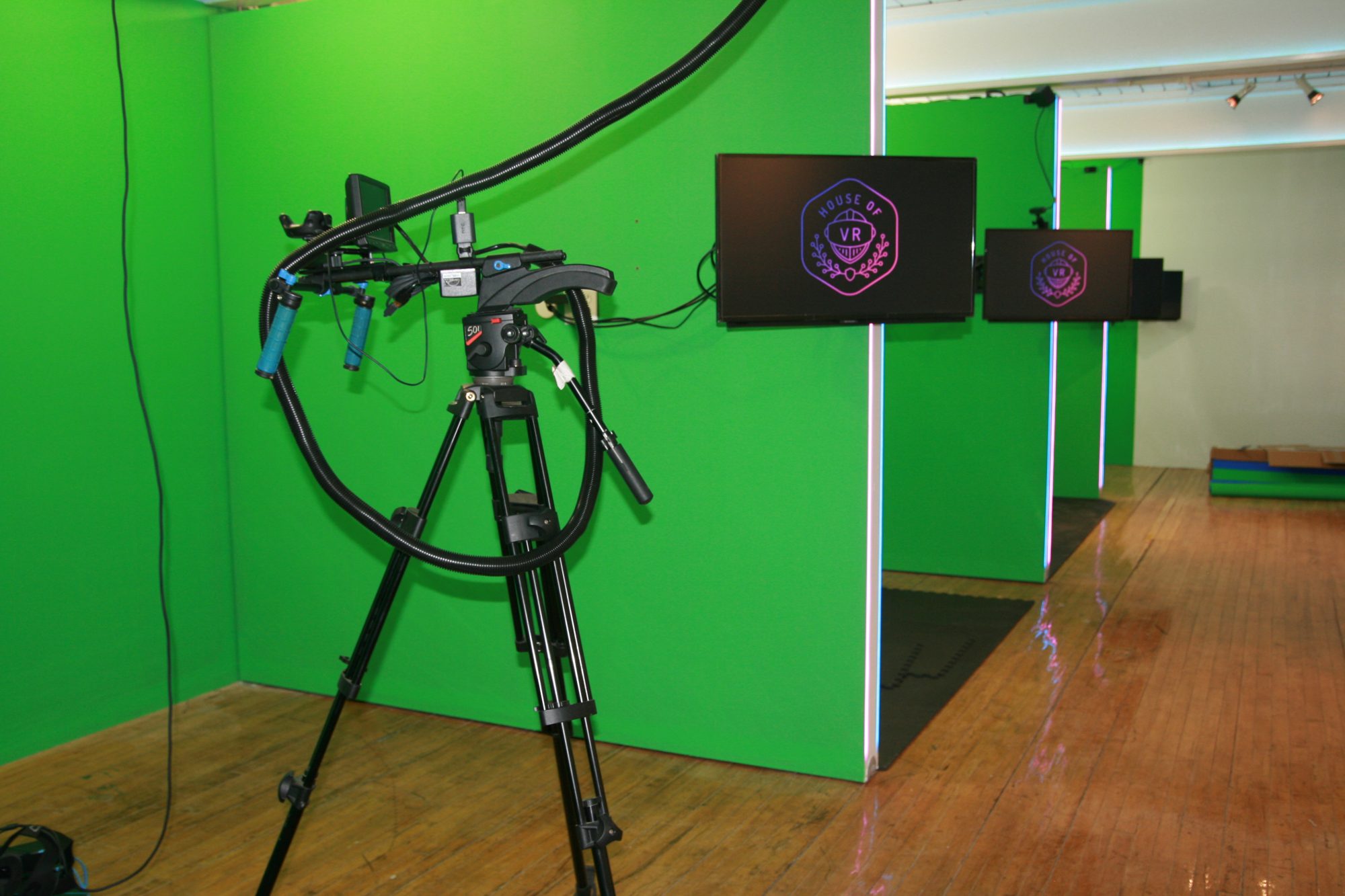 The main floor contains House of VR’s most exciting technology – five “mixed-reality” units that film VR users against a green screen, so that rather than seeing a first-person view of what the player is seeing on the screen next to them, anyone watching the player gets to see them inside the game.

“We want the experiences people have here to be communal,” Brotman explains.

Like the VR equipment on the second floor, the mixed-reality equipment can be rented hourly and shared by up to four people, for $75. 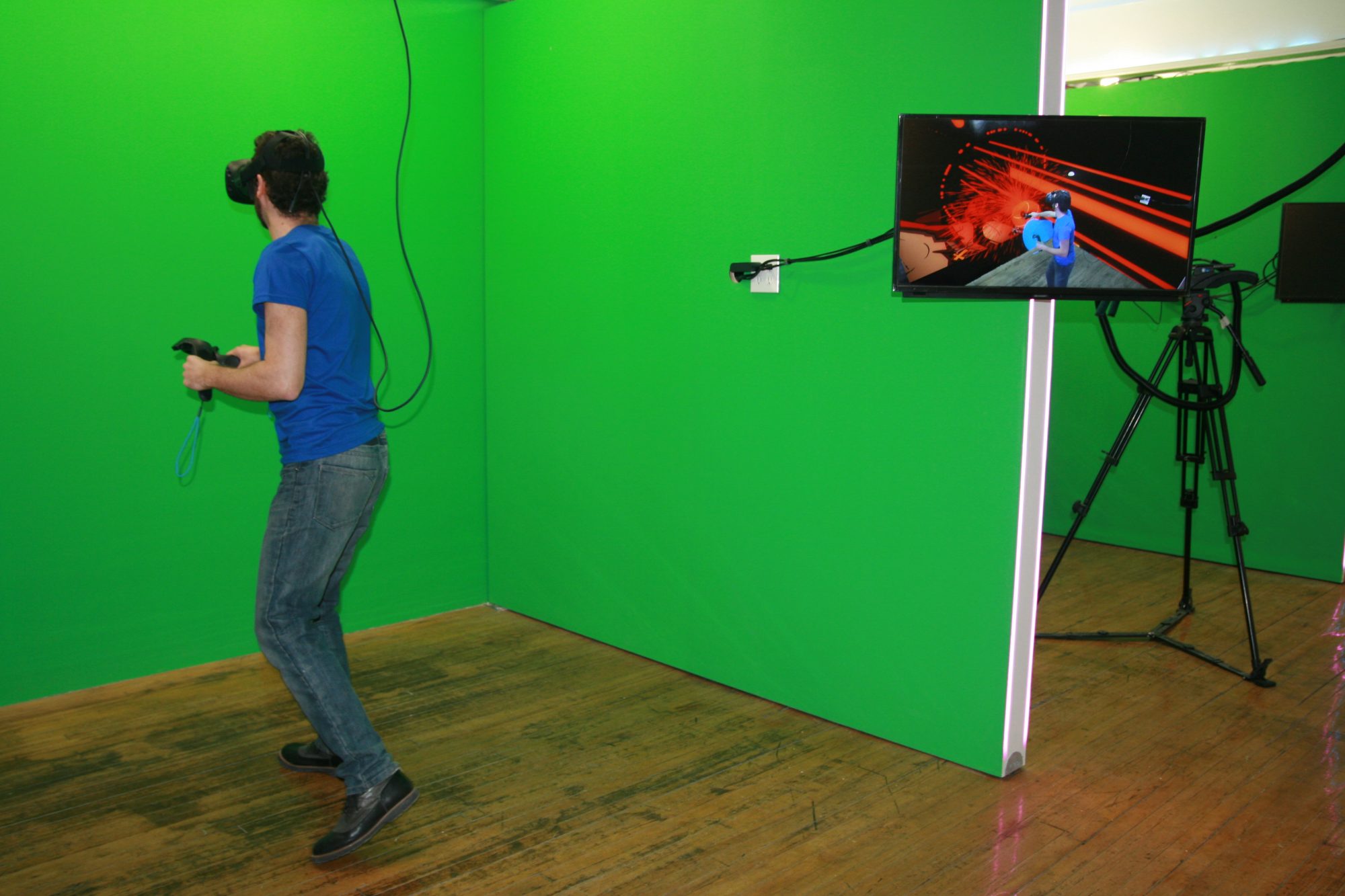 Users can choose from multiple games, but this is a particularly effective one to showcase: the game generates round orange, blue, and purple missiles in time with a song on YouTube, Audiosurf-like, which the player must block using a pair of virtual orange and blue shields manipulated by the device’s Wii-like controllers.

As demonstrated by Brotman, the game is fully immersive for the player, while viewers watching him on screen are treated to footage that is almost movie-like in its ability to mix live-action and digital animation. 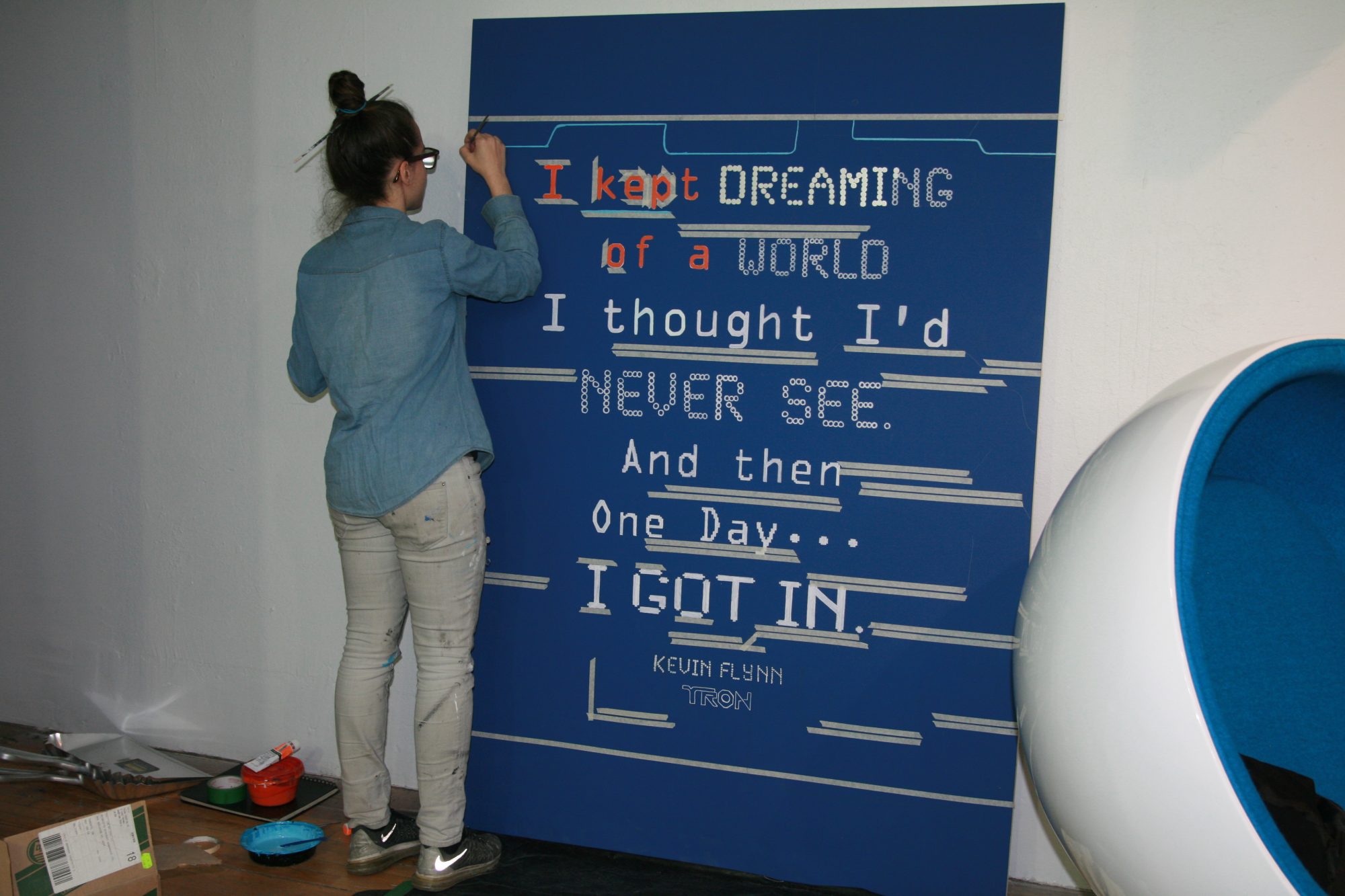 Part of House of VR’s ground floor remained a work in progress during our visit, including this sign by Brazil-born artist Raquel Palis. 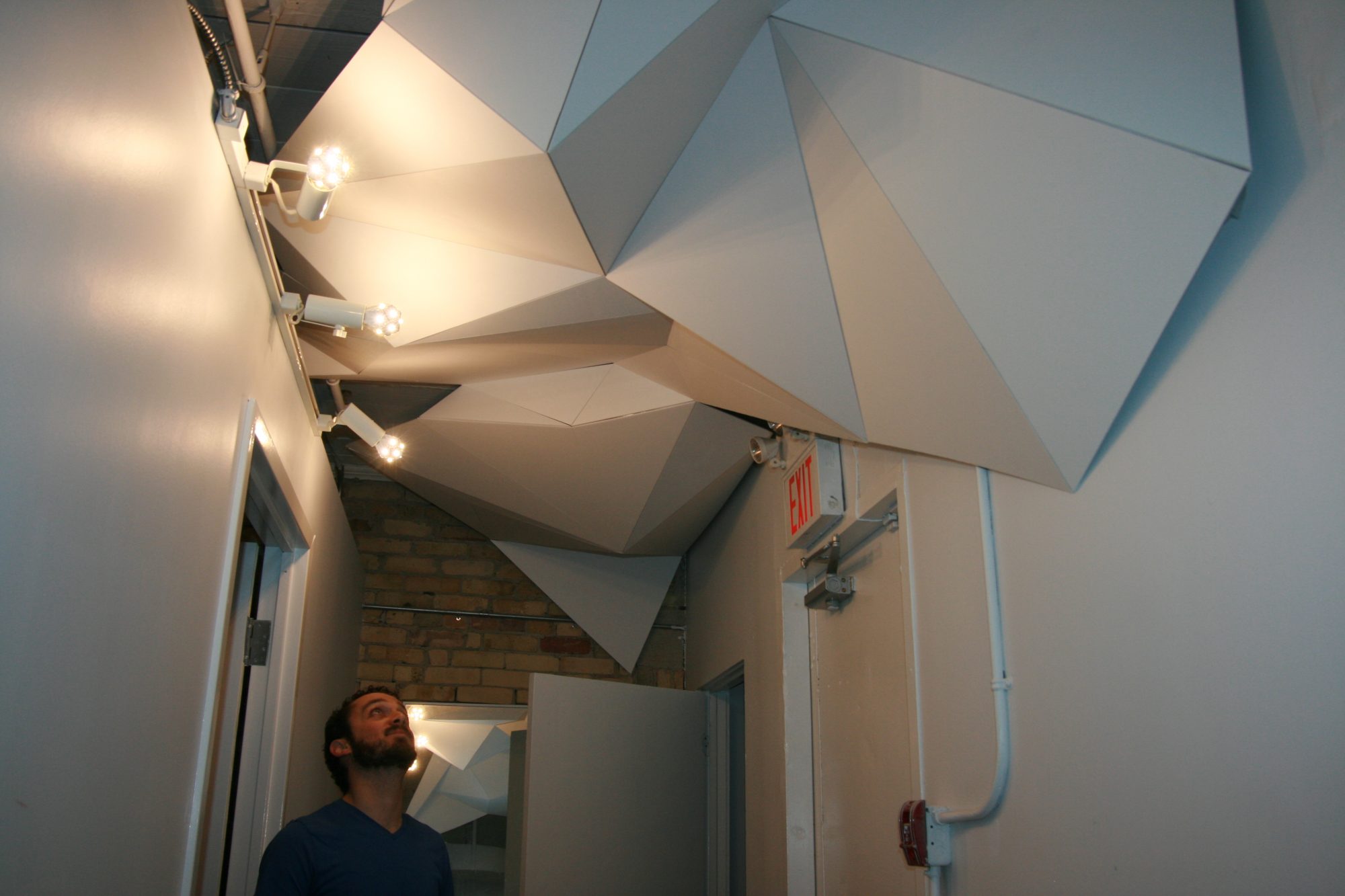 House of VR resides in the historic Burroughes Building, which means a 19th-century charm exemplified by the hardwood floors and brick walls, but also exposed ceilings in certain places. Brotman’s solution: a geometric installation designed by Toronto mixed-media artist Casey Watson and augmented by Nanoleaf bulbs. 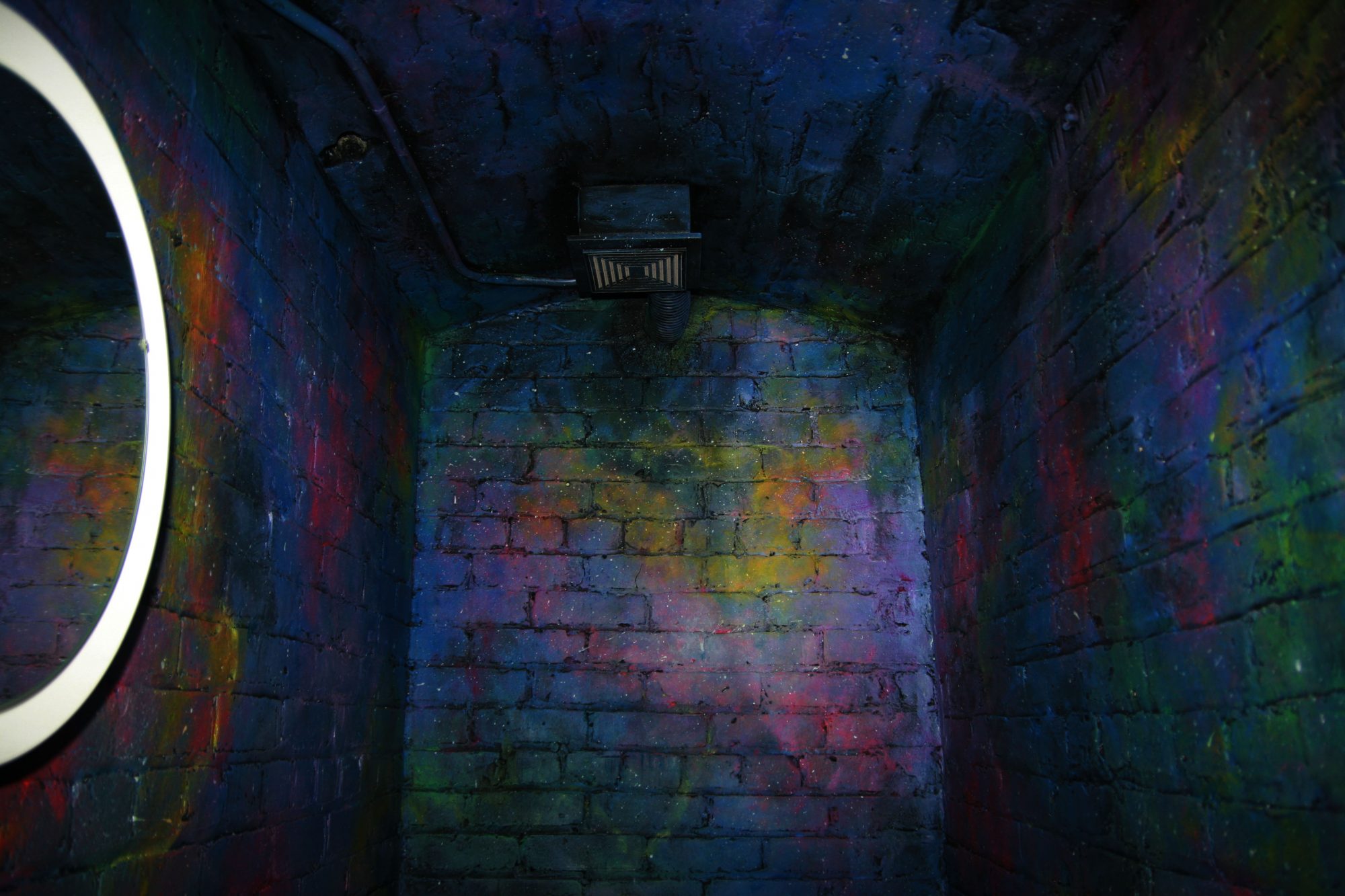 Creative director Payne’s other bathroom-based masterpiece, though our camera struggles to do justice to its galaxy-like design, which is covered in stars that glow in the room’s blacklight.

House of VR opens on May 6.