Canada’s best tech companies to work for in 2019

Glassdoor’s tenth annual Employee’s Choice Awards featured six tech companies in its top 10 Best Places to Work in Canada, as well as four others in its top 25. Glassdoor is driven by reviews from real employees who can post anonymously. Here, we look at the top 10 tech employers in Canada. This year saw some big companies drop off last year’s list. Salesforce and Cisco both fell off the top 25. Overall ratings of companies and CEOs dropped almost across the board.

For the second year in a row Microsoft climbed a few spots on Glassdoor’s top 10 and now resides in the top spot. Roughly 85 per cent of its employees say they could recommend the organization to a friend, an increase of 1 per cent since last year. “Amazing benefits, a fun work environment, managers who want you to succeed and inquisitive colleagues,” wrote one employee anonymously. CEO Satya Nadella once again received a 96 per cent approval rating, coming in at 8th in Glassdoor’s ranking of CEOs. The company itself earned a 4.1 out of 5 rating based on more than 23,000 employee reviews.

Another high-riser in the rankings, PointClickCare’s cloud-based software helps senior care facilities develop coordinated and collaborative approaches to their clients’ needs. It has offices in Canada, the U.S. and Nepal. CEO Mike Wessinger had a 89 per cent approval rating from employees (which was actually a stark dropoff from his 98 per cent approval rating last year), 80 per cent of whom would recommend the organization to a friend (another surprising drop from last years 90 per cent). More than 300 employee reviews contributed to the company’s current score of 4.1 out of 5.

Last year’s top-ranked company, the German-based corporation SAP, with regional offices in 180 countries, including Canada, had 91 per cent of its employees recommend the organization to a friend. Just over 95 per cent of employees approved of CEO Bill McDermott, who came in at 18th on Glassdoor’s CEO rankings. One employee commended the large-scale clients that they work with which allows them to work on cutting-edge tech projects. SAP has a 4.4 out of 5 rating from 12,000 employee reviews.

The video developer for consoles and mobile devices, Ubisoft, responsible for popular titles such as Assassin’s Creed and Rainbow Six Siege, currently has a 3.7 out of 5 score after 1,500 reviews. The company is based in Montreal with offices in Toronto, Quebec City and Halifax. An employee wrote that the environment was friendly, with many projects to work on, though they did note the varying styles of management with teams made it difficult to adapt. CEO Yves Guillemot received a 91 per cent approval (ranking 3rd on the top CEO rankings) rating from its employees, 74 per cent of whom would recommend working there to a friend.

Founded in 2006, the Canadian e-commerce company based in Ottawa has grown from a team of five working out of a coffee shop to a team of over 1,500 working in four offices across Canada and one in the U.S. Shopify CEO Tobias Lutke received a 92 per cent approval rating from employees (one of the few CEOs to maintain their rating instead of seeing it drop), and 72 per cent of employees say they would recommend working there to a friend. Shopify is currently sitting at a 4.0 out of 5 rating thanks to 504 employee reviews. Many employees noted the great culture as a major selling point of the company.

New to the rankings, Fortinet was founded in 2000 and is headquartered in Sunnyvale, CA. Specializing in network security, Fortinet was recommended to a friend by 83 per cent of 665 reviews it received from employees. Its CEO, Ken Xie, had an almost perfect approval rating of 99 per cent, but yet only ranked 12th on the list of top CEOs. Receiving an overall rating of 4.3 out of 5, one employee said it is one of the best places in the world to work on cyber security. 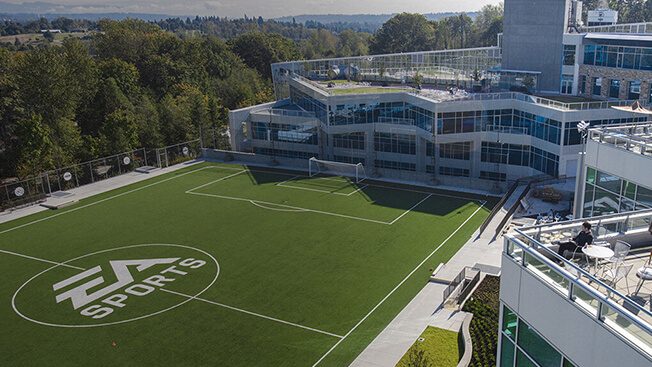 The second video game production company on our list, EA received an overall rating of 3.7 out of 5 from the over 2,000 reviews that were filed. Only 67 per cent of employees would recommend working at EA. Its CEO, Andrew Wilson, did not make the list of top CEOs after receiving a 77 per cent approval rating. While many touted the work-life balance, there were also many who said that it was not a very challenging place to work.

For the second year in a row, Apple saw a big drop in its ranking this year, dropping from 8th overall to 13th. Although CEO Tim Cook still maintained a high approval rating of 91 per cent, which placed him 17th on the rankings of CEOs, only 78 per cent of employees say they would recommend the organization to a friend. Based on more than 15,000 employee reviews, Apple has a 4.0 out of 5 rating.

The Canadian telecommunications giant based out of Vancouver, B.C., saw itself receive 3,000 reviews from employees, leading to an overall rating of 3.7 out of 5. Seventy-six per cent said they would recommend it to a friend. One employee said that one aspect that bothered them was how often you could be moved from team to team, although they did say that led to further opportunities than you would get if working on one team consistently.

Ceridian was another company that saw a large drop in the rankings. With offices in Canada, the U.S., Europe and Mauritius, 85 per cent of employees say they would recommend the company to a friend, while CEO David Ossip received a 94 per cent approval rating, becoming the only CEO on our rankings to actually receive a rise in his rating. More than 1,000 employee reviews have contributed to the company’s 4.3 out of 5 rating. A current employee wrote that front line and behind the scenes staff are respected and “promote a diverse culture.” However, the employee added “we are a company in motion and so things are constantly changing … change is often hard to adapt to and embrace, so we need to pace the rate of change down so employees can adapt more easily.”