The attempts of an older generation to understand the way younger people use technology is often a fruitless and confounding exercise, but thanks to a fairly comprehensive survey conducted by Niche of 7,000 high school graduates this month, there’s some hope of attaining this insight.

Niche, a U.S. network that helps graduating high school students choose a college or university to attend has a huge following of high school students. So it took the opportunity to survey 7,000 of those graduating this month and destined to college campuses in September about their technology habits. Specifically, the survey asked about 50 of the most popular technology websites, apps, services, and other cloud-based digital destinations. Some of what they found may surprise you.

Also surprising is to learn that not all high school students are obsessively reading every BuzzFeed article that pops up into those Facebook feeds. The survey shows that 73 per cent don’t read it at all, while the remaining 27 per cent that do visit the site will mostly only do so “occasionally” or “once a day.”

But looking at the wider trend, it’s not so much a problem with BuzzFeed as it is a problem with websites in general. Only BuzzFeed and The Huffington Post got more than 20 per cent of students that would at least visit the site occasionally. 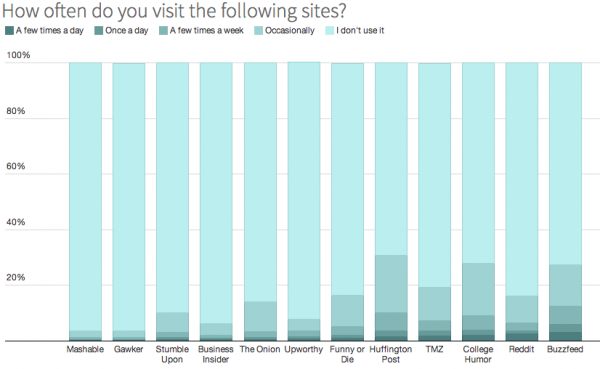 Instead of spending time on those sites, the Niche survey shows students are more likely to be spending time on messaging apps like Snapchat, Facebook messenger, and most of all sending text messages (more than 80 per cent do multiple times a day). They are also streaming video on Youtube and Netflix, or music over Pandora.

That’s data worth chewing on for marketers trying to reach this desirable demographic – can it effectively be done on the traditional web any more?