Vancouver’s Vision Critical has secured $20 million in financing from the venture capital arm of the Ontario Municipal Employees Retirement System.

VisionCritical was founded by Andrew Reid, son of legendaryCanadianpollster Angus Reid. (Andrew is now co-CEO and Angus is chairman of thefirm.) The company uses online panels to provide user and customerfeedback for over 600 clients on their products and services, a sort ofWeb version of traditional product testing focus groups. 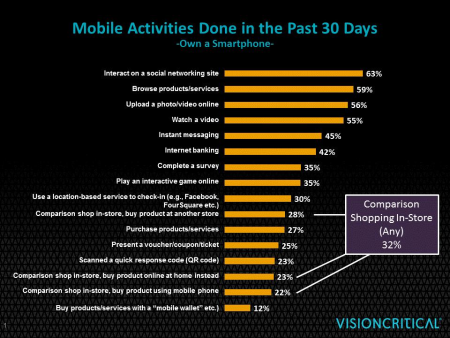 Screen shot of data on smartphoneuse analyzed by Vision Critical.

With $55 billion in assets, OMERS is one of Canada’s largest pensionplans. Its VC division OMERS Ventures has been making a string ofinvestments in tech-related companies lately. On Aug. 17 it put $12million into Hopper, an online travel search Web site basedinMontreal. In May it took part in a series B round raised byToronto’sWave Accounting worth $12 million. And back in March it took a$20-million stake in Vancouver’s Hootsuite Media Inc.

Christine Wonghttp://www.itbusiness.ca
Christine Wong has been an on-air reporter for a national daily show on Rogers TV and at High Tech TV, a weekly news magazine on CTV's Ottawa affiliate. She was also an associate producer at Report On Business Television (now called BNN) and CBC's The Hour With George Stroumboulopoulos. As an associate producer at Slice TV, she helped launch two national daily talk shows, The Mom Show and Three Takes. Recently, she was a Staff Writer at ITBusiness.ca and is now a freelance contributor.
Previous article
Guardly app becomes Toronto school’s pocket panic button
Next article
Ryerson’s DMZ incubator takes on its first foreign startups