Toronto’s Ryerson University is welcoming nine young entrepreneurs from India for a four-month stint at its Digital MediaZone. It may just be the first time a Canadian technologyincubator hasformally launched a program to bring foreign startups into its fold.

It’s certainly the first program of its kind at DMZ, said DMZ executivedirector Valerie Fox. But it won’t be the last. 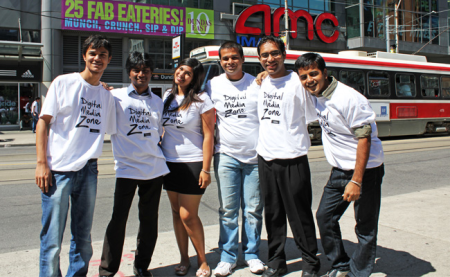 “We’ve also now extended it to students from Israel and China,” Foxsaid, adding that DMZ is still working out details about how manystudents will come from those countries and when.

As noted on our news site and others, many Canadian startups haveheaded stateside or overseas to take advantage of various foreignprograms such as Startup Chile or Startup Camp inSilicon Valley. TheDMZ initiative does the reverse, specifically designed tobring a cohort of startup entrepreneurs from one foreign country toincubate for a full term here in Canada.

The DMZ foreign fellowship program involves nine Indian entrepreneursin seven startup teams who will spend four months at the DMZ. They willcome here in staggered arrivals that began in May and end this fall.All are students chosen from among three schools: the Indian Instituteof Technology Madras, the Indian Institute of Technology Delhi, and theIndian School of Business in Hyderabad.

The program has already borne fruit. One of the Indian startups taking part, Zumbl, just won the $3,000 Samsung Innovation Award on Aug. 9. The awards, launched by Samsung India Electronics Ltd. and the Foundation for Innovation and Technology Transfer (FITT), and were open to IT students in the Indian cities of Delhi, Mumbai, Roorkee and Kanpur.

International awards aside, Fox said all of the Indian entrepreneurswho are at DMZ now (or recently graduated from the foreign fellowshipinitiative) have gained a lot from the program so far. Each Indianstudent is paired up with a ‘buddy’ from a resident DMZ startup to helpthem navigate the incubator and the city of Toronto. The Indianentrepreneurs also get to take part in weekly peer-to-peer meetings tohear about the experiences of DMZ’s Canadian startups and then sharetheir own unique insights about startup life in India.

The Indian startups are also introduced to visiting executives fromlarge Canadian corporations, five to eight of whom take a tour of theDMZ each week to see how the incubator works up close. It’s a chancefor the Indian entrepreneurs to pitch their own ideas to these membersof Canada’s corporate elite.

How Canada benefits
“I just had two tours this morning and introduced Zumbl to (thevisiting executives),” Fox said. “They represent a possible newcustomer for the (Indian startup) companies.”

To be clear, this is a one-way program for now, not an exchange. Oncetheir four months are up, the Indian entrepreneurs go back to India,taking their ideas and their newly gained Canadian startup experiencewith them. There are no concrete plans right now to turn the programinto an exchange so the DMZ’s Canadian startups can enjoy a similarexperience at foreign incubators. Never say never, though – Fox isn’truling it out.

“At the moment it’s one-way because it was our first chance to do this.We’re very open to other ideas,” Fox said.

It’s pretty apparent how the Indian students potentially benefit fromcoming to the DMZ. In more specific terms, “each fellowship is valuedat almost Rs. 5.95 lakh (CAD $12,500) over a four-month period andinvolves reimbursing our pre-departure expenses (including flighttickets) as well as a generous monthly stipend,” according to a blog posted by Sharanya Haridas,an Indian student taking part in the program as founder and CEO of thestartup That’s So Gloss.

But how does the program benefit the DMZ and Canada’s startuplandscape, especially since the entrepreneurs all go back to Indiaafter the program ends?

“I love that question,” Fox said, answering one she appeared toanticipate all along. “Number one, the (Canadian DMZ) members get achance first hand to really understand Indian culture and think aboutthe possibility of getting their companies out into India. So it’sreally extending their reach. That was exactly the idea behind it inthe first place. We want our (homegrown) companies to be worldwide. Soyou need exposure to different cultures. Sometimes it’s too easy to say‘We’ll just stay local.’”

Secondly, Fox said, it looks like at least one startup straddling bothCanada and India may spring directly out of the foreign fellowshipprogram.

“I know one of the (Indian) companies cross-pollinated with a companyhere in the Zone and they’re talking about starting a companytogether,” Fox said, then added an epicurean metaphor to the mix: “It’slovely that it’s cooking.”

Christine Wonghttp://www.itbusiness.ca
Christine Wong has been an on-air reporter for a national daily show on Rogers TV and at High Tech TV, a weekly news magazine on CTV's Ottawa affiliate. She was also an associate producer at Report On Business Television (now called BNN) and CBC's The Hour With George Stroumboulopoulos. As an associate producer at Slice TV, she helped launch two national daily talk shows, The Mom Show and Three Takes. Recently, she was a Staff Writer at ITBusiness.ca and is now a freelance contributor.
Previous articleVancouver’s Vision Critical raises $20 million from OMERS Ventures
Next articleGogo in-flight Wi-Fi gets go-ahead for 2013 launch in Canada

Consumers have never been more suspicious, but it’s also a great time...