TD Canada Trust rolled out its new app today that enables a tap-to-pay function on some Android and BlackBerry devices operating on the networks of Bell Canada, Rogers Wireless, and Telus Mobility, the bank announced this morning.

The TD mobile app has been updated to include TD Mobile Payment on Google Play and BlackBerry World and is compatible with smartphones that support near-field communications (NFC) including BlackBerry 9900 and Samsung Galaxy series devices. Since Apple Inc. doesn’t support NFC on the iPhone, TD’s Mobile Payment feature won’t be available from the App Store.

Using NFC as the payments mechanism made the most sense because it is already quite common place in Canada, says Rizwan Khalfan, senior vice president of digital channels at TD Bank Group.

“It’s a matter of taking what is predominantly used in the plastic card and taking it a step further and enabling it on your mobile,” he says. “People use their mobile for everything and making a payment is fairly intuitive and seamless.”

TD Bank’s app can be used to pay anywhere Visa payWave is accepted, the point-of-sales terminals that accept Visa cards with a tap-to-pay capability. That’s because at present, only a TD Visa card account can be tied to a smartphone. But that could change soon.

“Our plans are to enable all the different payment vehicles you’d have in a TD account,” Khalfan says. TD is currently working with Interac on enabling an ability to tap-to-pay with a chequing account, for example.

While the mobile payments communication between the phone and the POS is facilitated by NFC, the actual account information is embedded onto the device’s SIM card. That’s why a carrier needs to be involved to properly provision the card, Khalfan explains. “We’re working with the other carriers to see how we can help them, so we can offer it to our customers that use carriers outside of the big three.”

As for security, Khalfan says paying with a smartphone can actually be more secure than paying with a plastic card. Users can enable a passcode that must be entered before each payment made and the account information is encrypted on the SIM card. If a device is lost, a user can contact their carrier and have that SIM card deactivated.

While Canada’s NFC penetration for payments may be high, that isn’t the case in other larger markets. What was once thought of as a sure-fire technology for mobile payments has sputtered in its popularity and seen lacklustre adoption overall. The fact that Apple has never supported it with the iPhone, a very popular device in North America, doesn’t help either. So Khalfan says that while NFC makes the most sense right now, he’s open to other technology to enable payments.

“We want to stay connected to what customers are adopting and using,” he says. “If they gravitate to one technology over another, we’ll make sure we’re there to meet their needs.”

TD also had an online poll conducted via the Angus Reid Forum online panel members. Out of a sample of 1007 Canadians ages 18 and up, here are some of the statistics provided by TD via infographic: 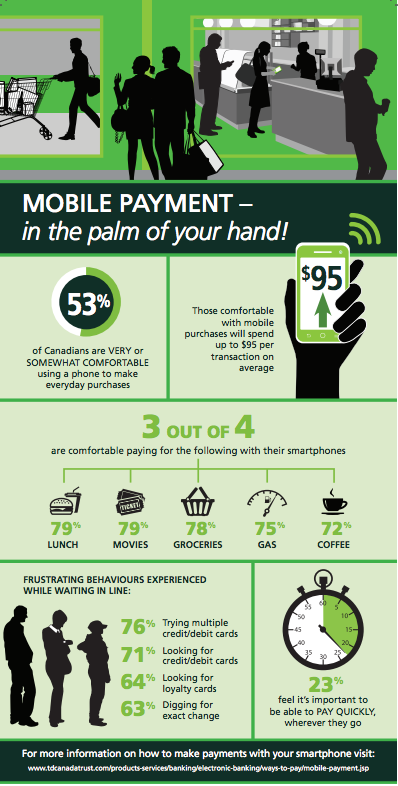 Brian Jacksonhttp://www.itbusiness.ca
Editorial director of IT World Canada. Covering technology as it applies to business users. Multiple COPA award winner and now judge. Paddles a canoe as much as possible.
Previous article
Aspera part of IBM’s plumbing in e-commerce
Next article
4 lessons for entrepreneurs, straight from Silicon Valley’s Steve Blank