Startup Canada out east
Over 500 people have attended Startup Canada events in NovaScotia for the kickoff leg of the group’s cross country tour. The tourstarted in Halifax on March 19 before moving on to Truro, Antigonish,Yarmouth, Sydney and then Halifax again on March 23. Localentrepreneurs got the chance to sit down with east coast businessexperts during 50 one-on-one interviews. Key areas of support neededfor Nova Scotia entrepreneurs were identified through the events,including better enterprise support, greater awareness and learningopportunities for entrepreneurial youth, more entrepreneurialmentoring, and more virtual and physical spaces for entrepreneurialcollaboration. 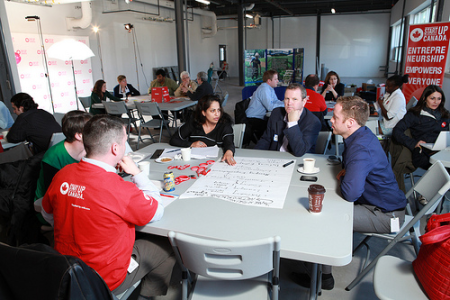 The next stop in the six-month 30-city tour is PEI from May 8 to 10. Awhite paper of recommendations for startup support initiatives will bewritten after the tour ends and presented to Prime Minister StephenHarper this fall.

“CATA applauds this major development in the United States andcongratulates our colleagues who worked so diligently to get thelegislation passed,” said Barry Gander, executive vice-president ofCATA. “CATA plans to bring the crowdfunding message and champions toCanada to help crystallize the movement here.”

On May 24 Sherwood Neisse, one of the most outspoken advocates forcrowdfunding in the U.S., will speak about the movement at an i-Canadaevent in the Toronto area (exact event details have not been releasedyet). CATA has expressed concern thatCanadian tech startups will fall further behind their U.S. counterpartsin landing financing unless Canada also legalizes crowdfunding.