Walk into Patty & Frank’s Gourmet Burgers & Hot Dogs restaurant on the Danforth in Toronto and you’ve got a fast way to pay for your fast food.

Pull out your smartphone, display a QR code generated by the SmoothPay app installed on your smartphone and you’re done. You’ll even get a $2 discount off your first purchase and a $5 credit for each $50 you spend if you become a regular. Owner operator Bill Andreopoulos says he noticed larger chain restaurants offering mobile payments and thought it would be an opportunity. Then he was approached by Smooth Payment Inc. with its solution.

“It was something we couldn’t say no to,” he says. “It’s actually enticing in the sense there’s people that want to use it and look for restaurants that offer it.”

SmoothPay’s app has a “places” feature that locates nearby merchants that accept it for transactions. Also seen are the discount offers available at that location, and how much credit has been put towards your next reward. 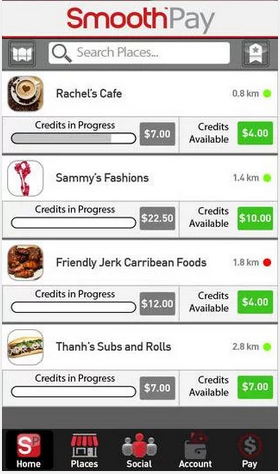 “The beautiful thing about SmoothPay is that all the merchants are doing loyalty rewards through it,” says Brian Deck, CEO and co-founder of SmoothPay. “No one is going to want to have 20 or 30 apps for each merchant in their smartphone so we see an opportunity to help the consumer consolidate their loyalty programs.”

Deck and the rest of the mobile wallet industry are eager to solve the problem of fat wallet syndrome. Consumers – and especially Canadians who are fond of loyalty programs and on average carry seven loyalty cards with them – are jamming plastic cards into their wallets for payments and various loyalty programs. A digital app like SmoothPay could seamlessly integrate all that into a smartphone.

Merchants that use SmoothPay must install a scanner to their POS terminal. SmoothPay helps with integration and merchants pay a monthly fee to use the scanner plus a commission on sales made through the app.

“It’s a win-win for the customer,” Andreopoulos says. “The more they spend, the more they save. It gives them a reason to keep coming back.”

SmoothPay signs up customers that download the app and captures their credit card information (multiple cards can be stored in the app). When a user is ready to pay, a QR code is randomly generated. Because it’s one-time use, the QR codes can’t be copied to access a user’s credit card, Deck says. Plus the QR code can even be modified to add a tip or apply a discount.

The QR codes also provide security because a user’s credit card information is never transmitted during a transaction. The QR code is used as a token to identify the payee, and makes a request to the server to complete the transaction.

FYI every $50 spent @PattyAndFranks you get $5 off. All locations have their own #Loyalty program w/ SmoothPay

Other mobile wallet solutions are tapping into smartphones with near field communications (NFC) support. The model is viewed positively in Canada where the tap-to-pay POS terminals that support formats like Mastercard PayPass and Visa’s payWave are widely deployed.

“We’ve stayed away from the NFC-based system to date and there’s one main reason for that, and that reason is Apple,” Deck says, referring to Apple’s refusal to include a NFC chip in any iPhone models released so far. “A large percentage of our sweet spot demographic is on the iPhone.”

That demographic is students, Deck says. With SmoothPay’s merchant customers being based in the downtown Toronto core so far, it is seeing good adoption from students attending the University of Toronto and OCAD University. But as the merchant base expands and SmoothPay lands bigger customers with locations across the country, that could change soon.

Launched in January, SmoothPay is live at 30 locations in Toronto right now. But Deck expects that to rise to 200 by this Fall. One of his customers has 80 locations nationwide and will be using a white-labelled version of SmoothPay’s app.

“Their brand is strong enough and they have the resources to build the white label app,” Deck says. White label merchant customers of SmoothPay will also be able to accept payments from users of the original app.

Brian Jacksonhttp://www.itbusiness.ca
Editorial director of IT World Canada. Covering technology as it applies to business users. Multiple COPA award winner and now judge. Paddles a canoe as much as possible.
Previous article
Hackers turning to Microsoft Office to attack users
Next article
Video marketing usage on the rise, survey finds