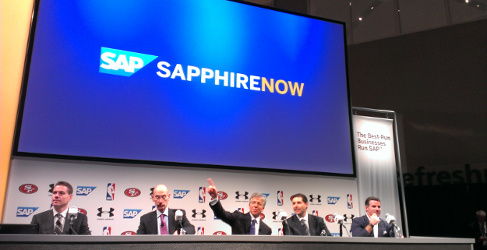 SAP AG announced a new software solutions package for a new business vertical today, alongside oil & gas and healthcare, with a unique small business customer to show it off at its Orlando-based Sapphire Now conference.  The vertical is sports and entertainment and the small business is the San Francisco 49ers.

As the 49ers prepare for a 2013-2014 season in a brand new stadium – Levi’s Stadium in Santa Clara, Calif. – CEO Jared York wants to have the right technology in place to wow fans and keep their attention on the game, even if that means scouring statistics about players on their smartphones. The 49ers will also be looking to SAP’s big data analytics capability to help assess fresh talent for its scouting operations, York says. The NFL football club only counts 125 employees outside of its football operations, a pittance compared to the large enterprise customers normally deploying SAP solutions.

“We’re in a world where information is at your fingertips,” York said on stage in a mock-up interview featuring James Brown, host of CBS’ The NFL Today talk show. “If that doesn’t work inside a sports arena… I don’t think that’s going to be acceptable in the near future, if not the present.”

York said that often fans in the stadium don’t have access to as much information about the game they are watching compared to those watching on TV. But with the live experience the most exciting way to watch a game, he says it’s important to start providing that information so fans will be filling that new stadium. His 68,000 season ticket holders should help do that too.

Also on stage to debut SAP’s new Sports & Entertainment solution portfolio were incoming NBA commissioner and current chief operating officer Adam Silver, and Kevin Plank, founder and CEO of Under Armour Inc. SAP co-CEO Bill McDermott introduced the new clients to stage, saying this marks SAP’s 25th and most recent industry vertical. SAP will help sports brands impress their customers and turn them into enthusiastic fans, McDermott pitched on stage. Delivering information to mobile devices will be a key part of doing that for the millenials generation, he says.

“Do you ever notice kids going to these games and spending more time on their device than looking at the game?” he says. “That device is issuing in a new era of opportunity for these franchises.”

The Sports & Entertainment solution contains software that will help sports brands gauge their fan engagement, analyze social media posts for sentiment, and deliver loyalty rewards and targeted offers. In the athlete performance area, there’s “Money Ball” style software that helps owners manage their salary cap by getting the most out of each player, measuring player performance on the field, and identify it with scouting oriented software. Then there’s the stadium operations aspect that will put in place point-of-sale systems and use analytics to determine just how many hot dogs your concession stands should be roasting.

York says technology will be an important part of the new stadium, but fans won’t be seeing a lot of hardware. A 49ers mobile app will allow fans to watch replays on smartphones and tablets rather than look up to television screens. He’s mentioned the idea of having a ticketless, cashless stadium that will also see fans ordering beer and hot dogs via their smartphones.

That vision was echoed by SAP”s McDermott in his opening keynote.

“Why invest in hardware?” he asked rhetorically. “Software is the innovation layer, where the value is.”

Follow Brian Jackson as he covers Sapphire Now from Orlando on Twitter. He’ll be live tweeting key notes and other conferencing happenings from @brianjjackson and @itbusinessca accounts.

Brian Jacksonhttp://www.itbusiness.ca
Editorial director of IT World Canada. Covering technology as it applies to business users. Multiple COPA award winner and now judge. Paddles a canoe as much as possible.
Previous articleWavefront to partner with Waterloo startup accelerator
Next articleThe Web gets real: The democratization of manufacturing