The event was the unveiling of Samsung’s new 9000 Series LED televisions at Toronto’s Design Exchange last week, and Johnson was the evening’s entertainment.

Before her act, Samsung  execs, both on and off stage, described how the 9000 Series LEDs – which they said represent a coup in “industrial design aesthetics” – would make the livin’ a whole lot easier and much more entertaining for Canadians .

“Wireless connectivity” is a hallmark of the 9000 Series, and a feature emphasized by Samsung spokespersons in media briefings.

“[The 9000 series TV] is your portal to the connected world,” Robert Gumiela, director of marketing, consumer electronics, Samsung Canada told the audience at the launch. “Facebook, Twitter, NetFlix – are but a small number of the information content [services] accessible via wireless DLNA.” 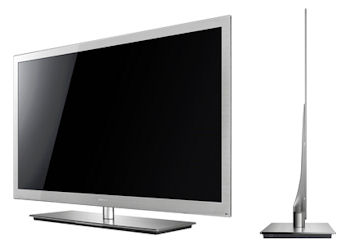 Consumers directly benefit from the standard as they are able to move multimedia files — such as videos, photos, music — between compliant devices over a home network.

DLNA technology is vendor agnostic, allowing content to be streamed between DLNA-certified devices from different vendors.

However, the standard is also helping Samsung promote its brand across its multiple product lines.

“At Samsung we want to create a synergy between all the products we currently have available to all consumers,” Jerry Ferreira, field marketing rep, Samsung Canada told ITBusiness.ca.

“Whether your personal handheld device is a camera, a phone, a tablet PC, or your source of content is the Internet — through a personal computer all your content can be streamed wirelessly to a 9000 LED series TV,” he said.

He said the 9000 series and other Samsung displays offer users the ability to stream video, music and pictures to any network-connected device that’s also DLNA certified.

“So from your laptop PC in your kitchenette (for instance) you could potentially stream high-definition video in 1080p directly to the TV set without any wires.”

And the transfer mode can be either “push” or “pull” (as is the case with DLNA-certified displays from other vendors – such as the Toshiba Regza UX600U LED TV, which we recently reviewed).

“From a 9000 series TV, you could push music or even a movie to your PC,” Ferreira said. “Or visa-versa, using the TV’s remote control you could access your PC or even our DLNA-certified Samsung Omnia II Phone  — pull in content from there and have that stream on your TV.”

Samsung has sought to simplify the process with its proprietary Internet@TV service.

This service — available on the 9000 series LEDs and other high-end Samsung displays such as the Samsung PN58A650  —  provides access to sought-after Web content on your TV set through a bunch of “widgets.”

Apart from the 9000 LED TV being 3D capable, it also offers a feature dubbed 3D simulation – a technology available on other Samsung 3D displays as well.

“Any of our 3D TVs will be able to create 2D to 3D simulation using our processing chips,” Ferreira said. “It will give far greater depth to your picture.”

How close will this “simulation” come to an authentic 3D experience? “The effects will be anywhere from minimal to really good, depending on what you’re watching,” he said. “Of course if you want to watch an actual 3D movie in Blu-Ray, you would need to also purchase one of our 3D Blu-Ray players.”

Samsung sets a lot of store on aesthetics when designing its displays, in an attempt differentiate these from what the competition offers.

One way it does this is through its proprietary touch of colour (ToC)technology.

ToC involves injection of colours into the frame of the display through a complex fabrication process.

The end result is a part-transparent, part-opaque crystal-like bezel that features a hint of red blended into the dominant glossy black.

ToC was also used in the Samsung SyncMaster T220HD monitor, the Samsung LN52A650 LCD TV and is available on all Samsung’s Series 6 and Series 7 LCD HDTVs.

With the 9000 Series LED TVs, ultra slimness – depth of just 0.3-inches (7.6 mm) – is the main design proposition, and one that will greatly contribute to its market appeal, according to Ferreira.

“When you consider the TV’s design, its advanced 3D viewing features, its wireless DLNA capabilities, and its energy efficiency (40 per cent more efficient than a conventional flat panel device) we’re convinced our 9000 series LEDs will do very well.”

But in the fiercely competitive “displays”market, the jury is still out on that one.