In fact, these hardware offerings are usually front-and-centre in all of Samsung Canada’s promotional initiatives targeting the media.

One noteworthy exception, though, was the firm’s IT Print Solutions Roadshow held at a downtown Toronto hotel last week.

During the entire event, very little was said about specs and features of the latest Samsung printer or MFP models — nor were any of these devices put on display.

Sing a song of Samsung … software

Indeed, the focus of this unique roadshow was not Samsung hardware, but rather a software-driven strategy dubbed managed print services (MPS).

The understanding of MPS has evolved over the past few years, but the term has been most recently defined as the “active management and optimization of document output devices and related business processes.” (Managed Print Services Association, May 2010).

All the presentations at last week’s “roadshow” dealt with specific Samsung software offerings in the MPS space.

The business reason for this focus is apparent. 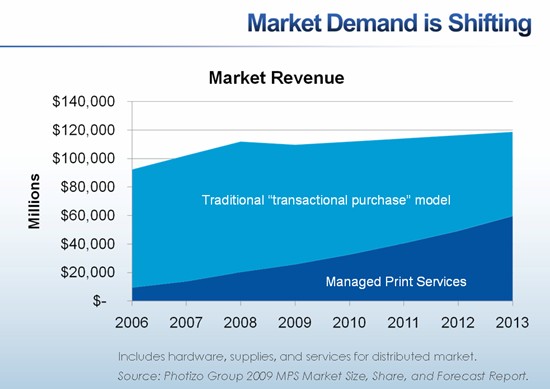 Spending has reduced both in the business and consumer markets, said Lai-Ling Lam, senior Gartner research analyst in a statement. “The situation is further exacerbated by shortages of popular low-end inkjets and page printers to home, small businesses, and small and medium businesses (SMBs).”

While Eastern Europe, the Gulf region, and Latin America are hardest hit, “not a single region was spared the downward trend” the Gartner report said.

The financial crunch, it said, could force companies to change their print consumption patterns.

In response to this challenge, Gartner said, vendors are looking “at alternative strategies, such as managed print service (MPS) … as ways to increase revenue.” (Emphasis mine).

For Samsung and other major printer manufacturers, MPS represents a sizeable, untapped space, and a way to grow their presence in relatively lack-lustre printer market.

It was a message Claudiu Lazarescu, senior sales engineer, IT Solutions at Samsung Canada made forcefully at last week’s roadshow.

“MPS is picking up steam, and is estimated to account for around 50 per cent of the total [printer] market share by 2013,” he told an audience largely composed of Samsung dealers and journalists.

There’s also going to be a big shift in the types of organizations that use such services, the Samsung executive said.

Today, he noted, about half the customers for managed print services are large corporations with more than 1,000 employees. 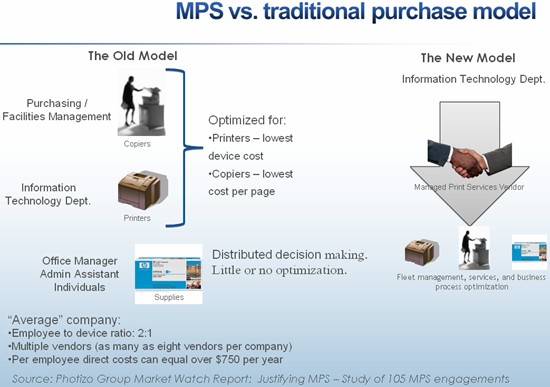 Ergo — the majority of MPS users will be small and mid-sized firms.

And adoption of this strategy, Lazarescu predicted, will bring these businessess huge cost and efficiency benefits.

For one, device usage will be optimized. The traditional model offers a 2:1 employee to device ratio (two employees to one printer/copier). With an MPS rollout, he said, that ratio will improved to 6:1.

The study found firms adopting this approach saved more than $225 per employee, per year.

One such offering that’s got a lot of attention since its launch in April 2009 is SyncThru Admin 5 — a Web-based fleet administration tool.

The product was named the “pick of the year” in 2009 by Buyers Laboratory Inc., (BLI), the Hackensack, NJ-based firm that provides intelligence on imaging industry products based on comprehensive tests.

The goal is to boost end user productivity and efficiency, while saving time, costs and labour.

From Samsung’s perspective, target customers for SyncThru Admin 5 are mainly IT managers, who use the software to monitor their fleet, or office automation dealers.

The latter could install the software at their location and remotely monitor customer devices. 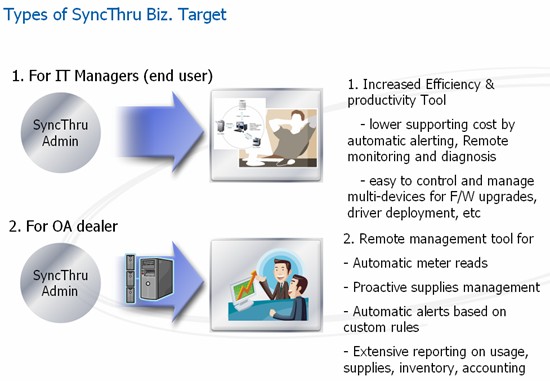 “The criteria for Alerts, as well as their security level, are completely customizable,” the Samsung executive said.

He described a couple of usage scenarios for the product that take advantage of two key Samsung SyncThru Admin 5 features – dashboard and driver management.

In the first scenario, “Brian” a government IT staff worker at a civic facility, is tasked with servicing the entire gamut of IT products – server, PCs, network devices, printers and copiers. Brian finds he simply doesn’t have enough time to perform a physical check on every single printer.

Lazarescu said Samsung SyncThru Admin 5 provides Brian with a customizable dashboard, with specific icons indicating device status (connected or not), toner status, device usage and much more.”Diverse items can be monitored on a single screen shot.”

In the second scenario, an IT administrator in firm that’s purchased a huge fleet of Samsung multi-function printers finds it terribly time consuming to install the device driver on every single end user’s PC.

In the past, the administrator would walk to each user’s workstation and physically install the driver on their PC, from a CD.

“SyncThru provides an easier way to do this,” Lazarescu said. “Its driver management capability allows the admin to remotely deploy drivers to multiple end user workstations, a feature that’s especially useful in an Active Directory environment.” 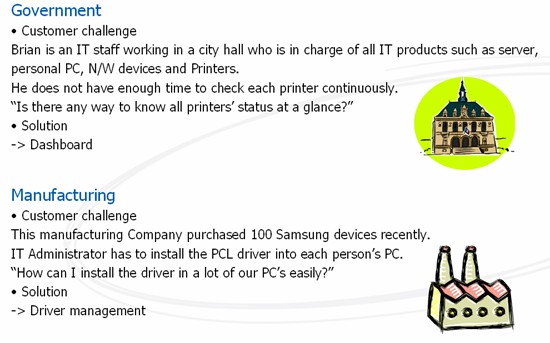